Soon after the sovereign debt crisis started taking a toll on European economies, several strikes and mass protests spread acoss the continent. Yet, while the crisis continued lingering on in some European countries, the mobilisation quickly ebbed away. Federica Genovese, Gerald Schneider and Pia Wassmann argue that one reason why people stopped going to the streets is that the Europan Central Bank decided to adopt a new unconventional policy to ease the problems in Europe’s economies and reduce public discontent.

The Great Recession endlessly lingers on in the European continent. Just a few years ago Europe observed a massive threat that the euro would collapse in the face of Germany´s unwillingness to rely on Keynesian policies and resistance in the southern member states against austerity. Back then, movements such as Spain’s 15-M grassroots campaign took their anger to the street and actively demonstrated against anticipated social cutbacks.

The anti-capitalist mobilisation of the early 2010s especially found eloquence in the pamphlet Indignez vous (Time for Outrage!), which the French concentration camp survivor Stéphane Hessel published in 2010 at the age of 93 years. In his essay, the retired diplomat urges the innocent population to revolt against the injustices of the conniving capitalist world. Yet, after the rallying call sold over 4 million copies worldwide, the movement quickly ebbed away.

In a recent study, we show that the neo-Keynesian monetary policy measures of the European Central Bank (ECB) were instrumental in reducing the anti-austerity protests observed across Europe. Neo-Keynesian macroeconomics strongly emphasises monetary measures as a tool to stimulate a faltering economy. Quantitative easing by the Federal Reserve and, since 2015, by the European Central Bank has been particularly instrumental in this regard.

Due to its limited and controversial mandate, the ECB did not possess the option to resort to these means in 2011. We show that, rather than unorthodox measures, the ECB relied instead on traditional interest rate policies in combination with repeated announcements aimed at reassuring markets and voters about the sustainability of the euro. This communication policy culminated in Mario Draghi’s famous reassurance to do “whatever it takes” to preserve the euro.

In our research, we focus on events in a number of European countries over recent years. Based on a newly compiled dataset of monthly political protests and information on ECB press releases and ECB deposit rates, we show that the occurrence of political protests is responsive to the actions of the ECB. The following figure depicts the protest trends for the months between September 2008 and December 2013, in addition to the value of the deposit facility interest rate and a selection of ECB announcements. 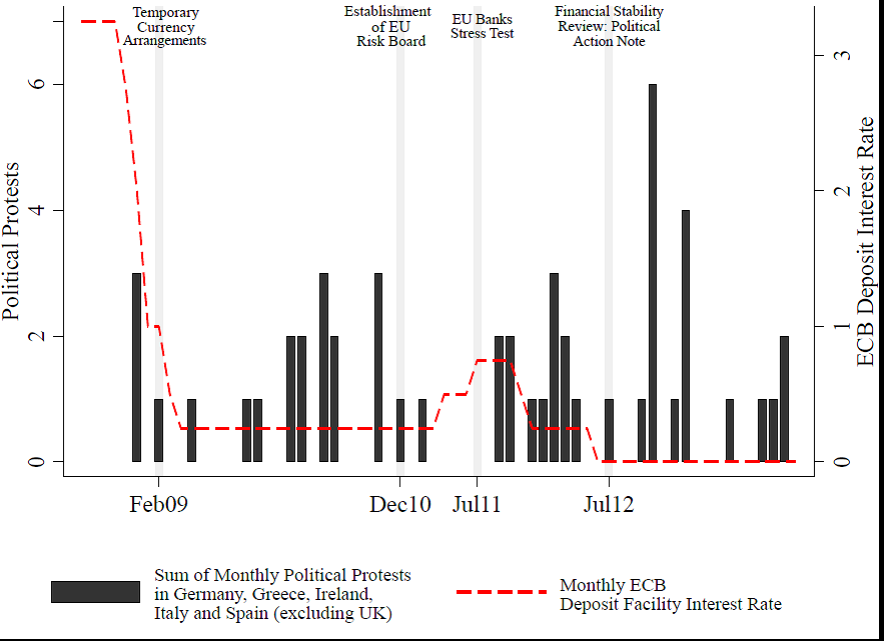 Noticeably, mass mobilisation began as the ECB decided to drop its deposit rate in early 2009. This wave of protests, however, stopped with the establishment of the EU Risk Board in December 2010. Only one political event occurred in Europe in the first half of 2011, until the summer Banking Stress Test, which likely triggered political demonstrations by artificially devising an adverse economic scenario in which banks stopped lending to households and business. Draghi’s July 2012 “whatever-it-takes” speech seems to have further mitigated these events aside from the final European-wide strikes in November 2012, which were staged as a protest against the international disagreement over shared liability and the German veto on EU bonds.

The next figure complements our understanding of the relation between the ECB and Europe’s political protests by demonstrating that counts of key words in the ECB press releases change from before to after the 2008 crisis. The graph shows that, after the outbreak of the crisis, the ECB decreased, in line with the new Keynesian macroeconomics, its emphasis on financial risk. Vice versa, the Bank gave more space to words such as governance and European, thereby increasingly addressing topics that Europeans cared most about at the time. We interpret this finding as evidence that ECB words mattered, and that the Bank injected confidence not only in the Euro but in the entire EU system. 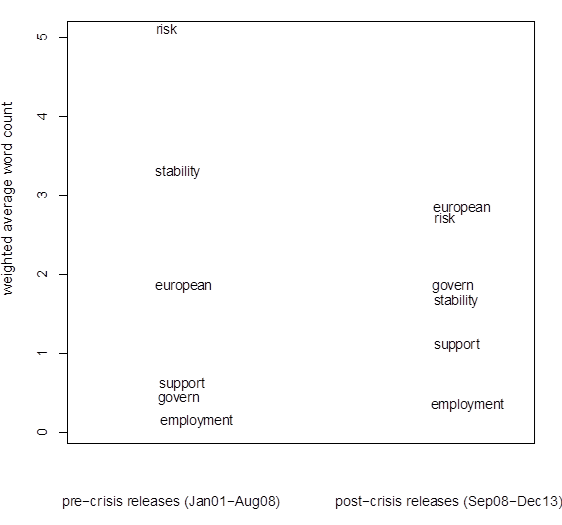 Our narrative is supported by the results of the econometric analyses presented in the article. The findings indicate that an increase in ECB press releases conditional on changing ECB deposit rates reduces political protests in EMU countries. In other words, the ECB press visibility, combined with action on the interest rate, effectively influenced welfare expectations and social mobilisation in the Eurozone. In line with our Neo-Keynesian expectations, public actions and statements seem to represent a particularly useful channel to understand how the ECB has decreased the worst fears in the crisis-ridden countries.

The power of Keynesian economics in the temporary rescue of the euro is quite ironic in light of the anti-Keynesian straightjacket the Maastricht criteria impose on EMU member states. As critics of ECB crisis management from both the right and left have contended, flooding the financial markets with cheap liquidity might foster another financial crisis in some years and may overly benefit shareholders and banks over other economic agents.

We do not know whether unorthodox measures will work again in the case of a renewed Grexit crisis or any other development that threatens the Eurozone. Yet, our empirical evidence lends considerable support to the conjecture that, somehow paradoxically, the very institution behind the currency that symbolically stands for the deep financial troubles of several EU member states, prevented the struggling economies from tipping over into prolonged social unrest.