Members of the Lithuanian parliament are being sworn in today following elections in October. Ingrida Unikaitė-Jakuntavičienė presents an analysis of the election result, which saw the Lithuanian Peasant and Greens Union make surprising gains to become the country’s largest party. She writes that addressing high levels of emigration among young Lithuanians will be one of the main aims for the party’s members as they enter parliament.

On 14 November, the newly elected Lithuanian Parliament (Seimas) holds its first parliamentary session, where members are sworn in and the Chairman of the Parliament is elected. The 141 members were elected in two rounds of elections on 9 and 23 October, with 71 of them being elected in single-member constituencies by majority vote and the remaining 70 in a nationwide constituency based on proportional representation.

Polling from July to September indicated that the governing Social Democratic Party of Lithuania (LSDP) enjoyed a lead with around 16 percent of support, while the other two largest parties were closely behind and had a roughly equal chance of finishing second: the Homeland Union (from 10 to 14 percent) and the Lithuanian Peasant and Greens Union ( from 12 to 14 percent). But the election itself produced an altogether different result.

In the first round, the Homeland Union, who articulate a broadly conservative platform, led with 21.7 percent of the proportional representation vote share and 20 seats, leaving the Lithuanian Peasant and Greens Union just behind in second place (21.5 percent, 19 seats) and the Social Democratic Party of Lithuania in a distant third place (14.4 percent, 13 seats). The other parties from the governing coalition received just 5.3 percent and only 5 seats. In total six parties shared the 70 seats available in the nationwide PR vote.

The results of the first round clearly illustrated the dissatisfaction of Lithuanian citizens with the current ruling coalition (composed of the Social Democratic Party, Order and Justice, and the Labour Party). They gave solid backing to opposition parties including Homeland Union, the Liberals, and the Lithuanian Peasant and Greens Union. These three parties received over 50 per cent of the national vote combined, while many of their candidates participated in the second round of single member constituencies.

The traditional pattern of voters punishing the governing parties, as occurred in the last elections in 2012, seemed to have been repeated. The failure of the ruling parties has been attributed to slow economic growth, various corruption scandals that were discussed in the media over the months preceding the elections and the adoption of a new labour code that was unpopular among voters. However, the second round of the elections had a substantial effect on the final number of seats won, with the Lithuanian Peasant and Greens Union moving into first place.

This was not itself a major surprise as the first round showed that the two most popular parties were mainly competing between themselves for seats in the second round, and a slight difference of votes ultimately had the potential to decide the winner. What nobody predicted, however, was that the Peasant and Greens Union would win by such a wide margin and secure 54 seats. In the process, they won the largest number of seats of any party since the 1996 elections. The table below illustrates the final results, showing the difference between the national vote share in the first round and the final tally of seats in parliament. 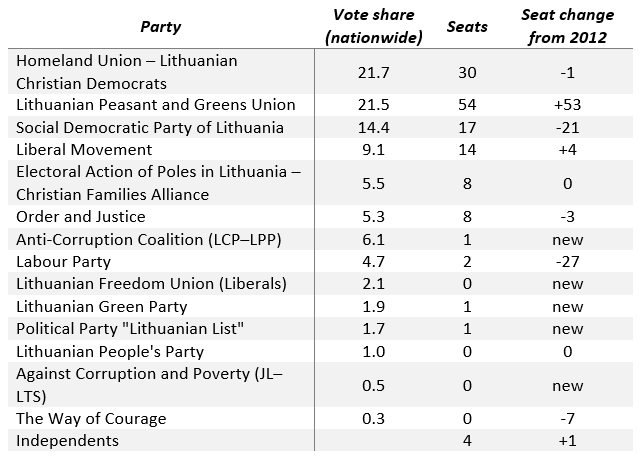 Note: The vote share shown is only for the vote in the nationwide constituency. For more information on the parties, see: Homeland Union – Lithuanian Christian Democrats, Lithuanian Peasant and Greens Union, Social Democratic Party of Lithuania, Liberal Movement, Electoral Action of Poles in Lithuania – Christian Families Alliance, Order and Justice, Labour Party, Lithuanian Freedom Union (Liberals), Lithuanian Green Party, Lithuanian People’s Party, The Way of Courage. The Anti-Corruption coalition is made up of the LCP and LPP, while the Coalition Against Corruption and Poverty is made up of the JL and LTS. Voting figures are rounded to one decimal place. Source: Prepared by the author according to the data provided by the Central Electoral Commission of the Republic of Lithuania.

Elections in single-member constituencies are usually associated more with competition between personalities rather than among parties. The Homeland Union had more nationally well-known and experienced candidates than the Lithuanian Peasant and Greens Union. Despite this, however, in the second round the electorate voted unexpectedly along party lines, giving the Lithuanian Peasant and Greens Union the right to lead efforts to form a coalition government.

Their victory was not only representative of a desire for change, but also a vote against the established political parties that have dominated Lithuanian politics for the last two decades. As some of the post-election communications with voters have illustrated, the electorate were not expecting there to be substantial policy changes, but did expect the political newcomers to show more respect for the interests of citizens than their predecessors.

Why were the Lithuanian Peasant and Greens Union the vote for change?

While the electorate’s desire for change was clear, it is an open question as to why the Lithuanian Peasant and Greens Union should be the party to primarily benefit from this sentiment. In reality several factors likely played a role.

First, most of the major parties had endured problems related to the transparency of their activities, with several parties being associated with various political scandals. Among the most notable examples were the Labour Party’s leaders, Vytautas Gapšys and Victor Uspaskich, who faced allegations in a lawsuit linked to the party’s finances; Order and Justice, who had to contend with accusations that members of the party were trading in influence; the Minister of Defence from the Social Democratic Party of Lithuania, Juozas Olekas, who was involved in a public procurement scandal; and the Liberal Movement’s former leader Eligijus Masiulis, who was caught up in a political corruption scandal.

Second, the government was successful in stabilising the country’s economy after the reforms carried out by the former government, led by Homeland Union, between 2008 and 2012. However, the general perception of the public was that this stability felt more like stagnation, with the government viewed as incapable of dealing with problems such as emigration, unemployment in peripheral regions, low wages, and low pensions. An initiative to liberalise labour relations between employers and employees was introduced late without sufficient time being granted for consultation with labour representatives. The impression given was that the Social Democratic Party, the largest party in the government, had the interests of employers closer to heart.

Third, the combination of political scandals, a sluggish economy, and rising prices after the introduction of the euro, created favourable conditions for an opposition movement to offer an alternative. The Lithuanian Peasant and Greens Union proved successful in communicating their ideas and persuading those voters who were disappointed with the traditional parties to support them at the ballot box. The party allowed the popular nonpartisan politician Saulius Skvernelis, a former Minister of Internal Affairs, to lead their electoral list, thereby introducing the possibility of nonpartisan professionals participating as candidates. This idea of nonpartisan politicians and ‘professional government’ differentiated the party from the other traditional parties and appears to have been attractive for a large number of voters.

The campaign was also closely related to the issue of preventing alcoholism, which is a topic that is of great importance in more rural regions. The Peasant and Greens Union proposed some radical solutions in this area which, though difficult to implement, have received public support. The party also made a major stand on the issue of emigration, arguing for more favourable living conditions that encourage Lithuanians to stay in the country. This is a topic of great importance given the numbers of young people who choose to leave each year.

The Homeland Union sought to tap into the desire for a new generation of politicians by electing a young leader, Gabrielius Landsbergis, who is the grandson of Lithuanian independence icon Vytautas Landsbergis. He presented himself as the candidate of change, while the party also included more young party members in prominent positions on the party’s electoral list. The Homeland Union campaign concentrated on the emigration issue, job creation and education reforms. However, this strategy was only partly successful. It attracted more young voters, but was unable to persuade older voters who perhaps hold memories of the party’s previous reforms.

What now for Lithuania?

Discussions and predictions of possible coalitions began shortly after the election results. Homeland Union had indicated before the second round that they would be willing to work with the Lithuanian Peasant and Greens Union, but following the latter’s victory they changed their mind and Landsbergis indicated instead that they would potentially stay in opposition if they did not receive assurances. The Social Democrats also indicated that they were thinking of staying in opposition. This willingness to remain in opposition was something new for Lithuania as there is usually more of a concerted effort by parties to try and take part in coalition formation.

Future developments will determine whether the Peasant and Greens Union will remain united by its common values and capable of keeping the support of its non-partisan members. Likewise, the ability of the party to maintain the support of the electorate and live up to its promise of change remains to be seen. Another important element will be whether the party, alongside the Social Democrats, can create an effective counterbalance to the centre-right, represented by Homeland Union and the Liberal Movement.

All of the new parties that have succeeded unexpectedly in previous Lithuanian elections have disappeared from the political landscape relatively quickly or gradually lost the confidence of voters. The challenge for the Peasant and Greens Union will be to buck this trend and live up to their promise to change the image of Lithuanian politics. One might hope they succeed in this aim, but only time will tell.

Note: This article gives the views of the author, and not the position of EUROPP – European Politics and Policy, nor of the London School of Economics. Featured image credit: Ernests Dinka, Saeimas Kanceleja (CC-BY-SA-2.0)