Many Italian citizens living outside the country will have the opportunity to vote in the constitutional referendum on 4 December. But what impact could these votes have in shaping the result? Lorenzo Piccoli highlights that with voters outside Italy accounting for around 8 per cent of the electorate, the count at the Civil Protection Centre in Castelnuovo di Porto, where the expatriate ballots are delivered, could be crucial in determining the outcome.

On 4 December, over 10 million Italians will not be called to vote in the constitutional referendum: they are minors, prisoners, and individuals who have previously been in prison for over five years. Inclusion and exclusion from the franchise are crucial factors in an election: in the recent vote to select the US president, for instance, an estimated 6.1 million people did not have the right to vote due to a felony conviction. This is just one of several examples of the political battle that is being fought in many democracies over who should have the right to vote, and who should not.

Norms on inclusion and exclusion from voting may well decide the upcoming vote in Italy, too. The franchise for referendums in Italy reflects the average level of inclusion of European countries: according to the ELECLAW Indicators, Italy falls right in the middle when comparing the inclusivity of the electoral rules on national referendums with other European countries. Importantly, though, this is due to the fact that the electoral franchise is highly exclusionary against the over 4 million non-citizen residents, or foreigners, while being highly inclusionary towards the over 4 million non-resident citizens, or expatriates.

Italians abroad were enfranchised in 2001, largely as a result of the pressure exercised by the right-wing party Alleanza Nazionale – a member of Silvio Berlusconi’s government coalition from 2001 to 2006 – under the assumption that this move would be electorally rewarded for delivering a long-standing demand of expatriate lobby groups. The legislation that was approved in 2001 allows Italians abroad to cast their vote in the mail, therefore enjoying easier access to the ballot than, for instance, their fellow countrymen who are temporarily outside the municipality where they are registered as voters on Election Day. The votes of Italians abroad are delivered to a place that has been defined as ‘one of Dante’s circles’, the mega-centre of Civil Protection at Castelnuovo di Porto, where about ten thousand scrutineers will examine the ballots on 4 December.

It was there that a surprising turn of events took place when Italians abroad became able to exercise this right. It was the election of 2006, and the scrutiny of the votes in Castelnuovo di Porto unexpectedly overturned the slight margin of the centre-right coalition and handed a majority to the centre-left Union led by Romano Prodi. In the last Italian election in 2013, voters living abroad were again decisive in the narrow victory of the centre-left coalition in the lower chamber, amid a participation rate barely exceeding 30% among the external electorate.

There is, however, an important difference between those elections and referendums. In Parliamentary votes, Italians abroad directly elect their own representatives in the Senate (6) and House of Deputies (12). Though accounting for 8 percent of the electorate, reserved seats for expatriate constituencies represent less than 2 percent of the parliamentary presentation. What amounts to a form of malapportionment was in fact purposely introduced in order to mitigate the electoral impact of a freshly enfranchised and therefore largely unpredictable electorate. No such mechanism exists in referendums, where all votes carry the same weight irrespective of whether they were cast inside or outside of the country.

It is therefore no wonder that voters abroad have been a crucial target for both sides of the referendum campaign, although arguably more for the ‘yes’ than for the ‘no’ side. The government, for instance, has increased the pool of eligible voters by decreasing the minimum requirement of time spent abroad from one year to three months. In a recent tour in Brazil, Argentina and Uruguay – the countries that host the largest cohorts of ‘Latin American Italians’ – the Minister for Reforms was accused of campaigning for the ‘yes’ vote. And in October, many Italians abroad received a two-page brochure, signed by Matteo Renzi, inviting them to vote ‘yes’, alongside several photographs showing the Prime Minister in the company of world leaders like Barack Obama and Angela Merkel.

Ironically, while the vote of Italians abroad may be crucial in approving the reform, it would also remove their representation in the Senate. Italians abroad would continue to be represented in the Chamber of Deputies (although the electoral reform approved a few months ago states that the votes of Italians abroad would not be taken into account in the case of a second round of voting). This is one of the arguments that has been used by those supporting the ‘no’ campaign to convince Italians abroad to oppose the reform. Another is the claim, recently advanced by the president of the ‘no’ Committee, Alessandro Pace, that if the vote of Italians abroad was decisive for the victory of the ‘yes’ campaign, then ‘we will have the opportunity to make complaints to the central office of the referendum, because the vote, as established in our Constitution, must be personal, free and secret’, a set of conditions that allegedly cannot be guaranteed with regard to ballots cast abroad.

While doubts as to the secrecy of the vote are not empirically substantiated, suspicions regarding the reliability of the postal ballot are not entirely unfounded: allegations of vote-buying and malfunctions in the distribution of electoral envelopes have a long history in Italian politics and figure among the reasons why other countries, such as France, have replaced postal voting with other, arguably safer, voting methods, such as proxy or electronic voting.

In the last days of the campaign, the ‘no’ side have opportunistically revived a complaint made in 2013 by Ambassador Cristina Ravaglia, Director General for Italians Abroad. At the time, Ravaglia wrote in a letter addressed to the Foreign Ministry, the President of the Council and the President of the Republic, that the system that allows Italians abroad to vote was ‘totally inappropriate, if not contrary to fundamental constitutional principles enshrining that the vote is personal, free and secret’. Ravaglia criticised vulnerabilities in the system, citing for example the low turnout of Italians abroad and the high number of blank ballots in recent elections; but she did not cite specific cases where votes had actually been altered.

Those who live abroad have already received ballot papers. Envelopes with the vote and the anti-fraud barcode must be returned to the consulates by 1 December and from there will be carried to Castelnuovo di Porto. The latest polls suggest that the lead of the ‘no’ campaign is wide enough to determine the outcome, regardless of the vote of Italians abroad. But recent political events should encourage us to treat polling data with a fair degree of caution. Should the national margin be narrower than expected, then it will be in Castelnuovo di Porto that a majority may emerge.

Note: This article gives the views of the author, and not the position of EUROPP – European Politics and Policy, nor of the London School of Economics. Featured image: Castelnuovo di Porto, credits tesorintornoroma. 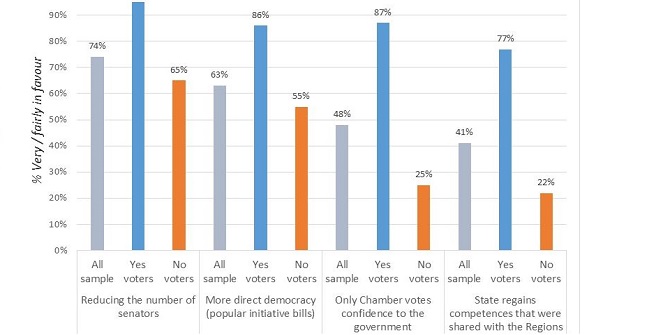