On 4 December, Italian voters rejected a proposed constitutional reform in a referendum, with Matteo Renzi subsequently resigning as the country’s prime minister. Nicolò Fraccaroli writes on where the country now stands, arguing that the situation is best captured as a ‘trilemma’ where economic integration, national sovereignty, and democracy create competing pressures on Italy’s economy and political system.

If Italy had voted Yes in its constitutional referendum in December, it would have resulted in major changes for the country’s domestic institutions. However, it would have also allowed Italy to strengthen its role in the European Union. This aspect was largely overlooked both at a domestic and international level during the campaign. But understanding how Italy’s position in the EU would have changed if the reform had been approved helps to highlight the sources of the country’s weakness at the EU level, as well as possible future reform proposals.

To do this, it is first necessary to frame the behaviour of domestic and supranational institutions in a cross-national context and to isolate how they affect democratic representation. Democratic systems do not always guarantee democratic policies. In a globalised context, some phenomena – pollution, capital flows, migration, terrorism, just to mention some – cannot be controlled at the national level. For this reason, we have observed the rise of new regional entities which are capable of coordinating policies that single national governments could not implement on their own.

This process creates a new dimension for democratic politics, where voters’ preferences are aggregated at a further level (intergovernmental negotiations) than the original one (national elections), and since they are aggregated together with the preferences of voters from other nationalities, each represented by its government, their representation is weakened. On the other hand, there is a gain in the effectiveness of the policies: as Dennis Leech has demonstrated, EU membership can increase a country’s ‘world power’.

This reasoning is elegantly captured in the famous ‘trilemma of the global economy’ outlined by Dani Rodrik. According to Rodrik’s trilemma, deep economic integration, national sovereignty, and democracy are mutually incompatible; an equilibrium will be feasible only when we sacrifice one of these elements. Italy’s political economy issues fit this trilemma and it is therefore possible to draw three different scenarios for the Italian case, as shown in the figure below. 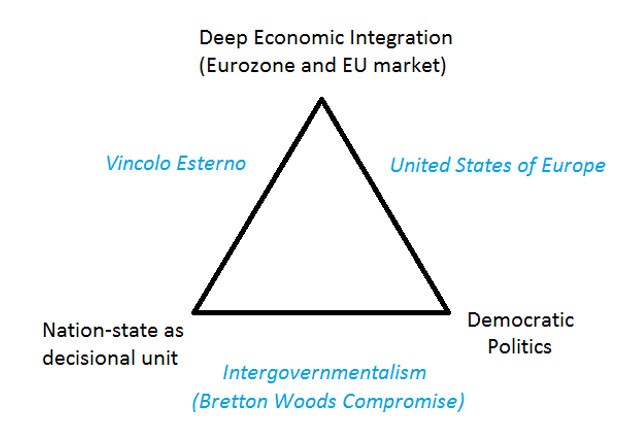 The combination of deep economic integration and democratic politics is of course the most utopic option of this trilemma, as even Rodrik has recognised. From the point of view of Italy, this could be imagined as a sort of European government directly elected by European citizens (I call this scenario the ‘United States of Europe’ in the figure), which is something that is decidedly unlikely to be established any time soon. Here, citizens vote for a government which actually has the capacity to change policy on key issues such as migration or fiscal policy. This is something that today a single European national government cannot do alone in many cases.

Deep economic integration in combination with nation-state decision-making describes the current position of Italy in the trilemma, as the theory of the vincolo esterno (external constraint) demonstrates. This theory was first applied to political economy research by Kenneth Dyson and Kevin Featherstone to describe Italy’s negotiations over the Maastricht Treaty. They noted that the partitocrazia – the power of party interests in the parliament – strongly weakened the Italian government’s scope of action in the negotiations, leading to the creation of externally-imposed constraints on the country’s economic policy.

In the context of this blockage, there was a “shift in the balance of power between domestic actors, upgrading the role of technocrats and the Banca d’Italia”. Guido Carli, the leading negotiator for Italy at that time, summarised this philosophy: “Our agenda at… the Inter-Governmental Conference on the EU represented an alternative solution to problems which we were not able to tackle via the normal channels of government and parliament”. In other words, the movement towards further economic integration that the Maastricht Treaty led to with the establishment of the European Monetary Union, made incompatible the coexistence of the government as a decisional unit and democratic politics, here represented by the different interests of the single Italian parties in the Parliament.

The shift of decisional power from the elected government to technocratic elites represents the loss in terms of democratic politics needed to keep the other two elements. The persistence in the years of the vincolo esterno in Italian political economy can be seen for example in Berlusconi’s resignation, linked to increasing external pressure following a letter by Trichet and Draghi to the Italian PM (not to the Parliament, despite Italy being a parliamentary democracy). Furthermore, the partitocrazia’s blockage driven by different party interests also re-emerged in the recent constitutional referendum: the front opposing the reform was composed of both extreme left and right-wing parties, Berlusconi and the Five Star Movement.

The rejected constitutional reform would have changed the institutional relationship between Italy’s parliament and the government by making the latter stronger and therefore decreasing the probability of a blockage due to diverging party interests. The government would have been dependent only on the vote of the lower chamber (Camera dei deputati) and not also on that of the Senate, which could have presented a different majority (due to different electoral rules and different pools of voters). With two equally-powerful chambers, instead, the government’s lifetime depends on the vote of both deputies and senators, resulting in higher government instability.

Luigi Guiso has observed that out of the seven legislatures, three ended before their mandate due to the lack of a majority in the Senate, while Pietro Manzini has demonstrated that two different majorities in the two chambers would be the most likely outcome if Italians were to vote today. Of course, making the government institutionally more stable does not always mean ensuring its de facto stability, but it still lowers Italy’s probability of turnover which is currently the highest in the world, as shown in this chart (which displays the number of governments’ turnovers per year worldwide since 1970; Italy reports the highest score).

A government’s stability has an impact on EU negotiations since it affects its credibility. If a government bargains on the coordination of certain policies by promising in exchange, say, to implement another policy at a domestic level, the credibility of the promise is directly proportional to the probability of the government still being in charge of it. And in Italy this probability is very low. As the rules vs. discretion literature teaches us, when discretion is too high, then rules are the only credible alternative. The vincolo esterno is the rule Italy seems to have embraced so far, especially in economic policy (see also Giavazzi and Pagano and their tying-your-own-hands theory on Italy in the EMU).

A stronger government would have therefore represented an alternative channel to express voters’ preferences in the EU intergovernmental context. Italy would have shifted closer to the combination of nation-state and democracy, which Rodrik called the “Bretton Woods compromise”. In this scenario the international dimension is not lost, but governments are the driving forces that coordinate with each other to control and regulate the markets on a global scale, as was the case in the Bretton Woods era.

Some European governments, Germany in particular, are already in this position but their preferences do not seem to converge; Bretton Woods found its benevolent hegemon in the United States, while Angela Merkel does not seem interested in taking over this role due to domestic interests. Anatole Kaletski placed these hopes in Italy, the only country that proposed an alternative economic model to deal with the crisis “given the failures of German leadership in Europe”. But the long-term nature of this political project cannot be reconciled with the short-termism of Italian governments. Eight months after Kaletski expressed these hopes, the Italian government has already resigned. Moreover, the current institutional context made Renzi’s government appear “schizophrenic” towards economic policies, advocating less austerity in Europe while courting praise for sticking to the rules in Rome.

At a domestic level, both supporters and opponents of the reform avoided discussion of the EU-dimension, focusing instead on problems such as weaker domestic checks-and-balances, the speed of law-making, or transforming the vote into an assessment of the Renzi government’s performance (due to Renzi’s promise of leaving his post in the result of a No victory). It could similarly be argued, therefore, that the domestic debate concerned only democratic politics.

The focus in international and domestic debates on these two elements as separate entities, without any consideration of the institutional framework in which they interact, generated distorted views and judgements on the outcome of the reform. By framing it as a ‘trilemma’, the rejected reform takes on a new point of strength which was largely ignored by the public.