Infrastructure investment has always been one of the cornerstones of economic development strategies in the European Union. Transport infrastructure investment has a central role in the European Commission’s Investment Plan for Europe (known as the ‘Juncker Plan’) as well as in public policies in many EU Member States (e.g. the HS2 project concerning the development of high-speed rail in the UK or the Messina Bridge project in Italy connecting Sicily with the ‘toe’ of the Italian peninsula). These strategies are often justified by European policy-makers on the basis of the presumed beneficial effects of new transportation for the economic prosperity of countries, regions and cities. Indeed, scholarly research argues that a minimum level of transport infrastructure is essential for economic activity, promoting local accessibility and leading to improvements in the provision of services, reductions in production costs, and enhanced productivity.

However, once a necessary basic threshold of infrastructure provision is reached, the economic impact of additional investment in transportation remains uncertain. The OECD claims that almost all of its member countries are already beyond such a threshold and that additional road expansions will have limited effects on economic performance. In line with this evidence, recent research has underlined that the returns of transport infrastructure investment in the EU have been more limited than that of expenditure in other development axes, such as human capital and innovation.

One possible explanation for the lack of a clear link between transport infrastructure investment and economic growth is that the returns to investment in new infrastructure are mediated by the quality of regional government institutions co-responsible for the selection, design, and realisation of infrastructure projects.

Political and institutional factors may influence both infrastructure spending and its economic returns at every phase of the investment. From the planning and selection of transport projects to their implementation, the characteristics of the governance system play an important role in determining future efficiency gains (or the lack thereof). The need for large budgets, the high number of actors involved at all stages of the process, together with relevant asymmetric information and moral hazard problems make the transport sector particularly vulnerable to political interference, corruption, and collusion.

Although justifications for new investment in transport infrastructure are generally based on economic efficiency arguments, the choice of whether and how to spend public resources for constructing new infrastructure may actually respond more to political and individual interests than to economic and collective ones. ‘Flagship’ and large-scale transport projects (i.e. motorways, high-speed rail, futuristic bridges) may be more appealing to incumbent politicians seeking re-election, at the expense of less flashy ‘ordinary’ transport investments (i.e. secondary roads, freight railways) or the maintenance and modernisation of existing infrastructure.

Regional government quality and the economic returns of transport investment

While the role of institutions and of government quality as mediators of the returns of public policy is increasingly acknowledged, this connection has seldom been proven empirically. In a recent study, we tested whether the quality of regional government shapes the returns of infrastructure across the regions of Europe. In so doing, we considered different typologies of transportation investment. We identified variations in the endowment of motorways from changes in other types of roads. Our working assumption was that this distinction reflects a set of structural differences in the underlying investment decisions: ceteris paribus investment in different types of roads is driven by political preferences for larger/smaller budget projects, longer/shorter expenditure timeframes, higher/lower visibility of the ‘final product’ as well as by the capacity of local ‘planners’ to correctly ‘diagnose’ local needs and identify bottlenecks.

We made use of the classification by the European Statistical Office (Eurostat) of EU roads into ‘motorways’ – all dual carriageway roads – and ‘other roads’ – all other state, provincial, and communal roads. Motorways are more visible, costly to build, and normally connect urban centres across different regions. The development of local roads is much less glamourous, from an electoral point of view, but less likely to give rise to the same ‘hub-and-spoke’ effects as motorways.

Figures 1 and 2 combine data on transport infrastructure investment with regional economic performance during the period of analysis. Regions are classified according to their average per capita growth rate between 1995 and 2009 and their investment in motorways and other roads respectively. The figures indicate that countries in the Iberian Peninsula recorded the largest increases in motorways (Figure 1). The greatest improvements in secondary roads took place in the Netherlands, Sweden, Poland, Romania, central France, and central and southern Italy (Figure 2). Interestingly, the highest growth did not always take place in the countries and regions where road infrastructure improved the most in the period. 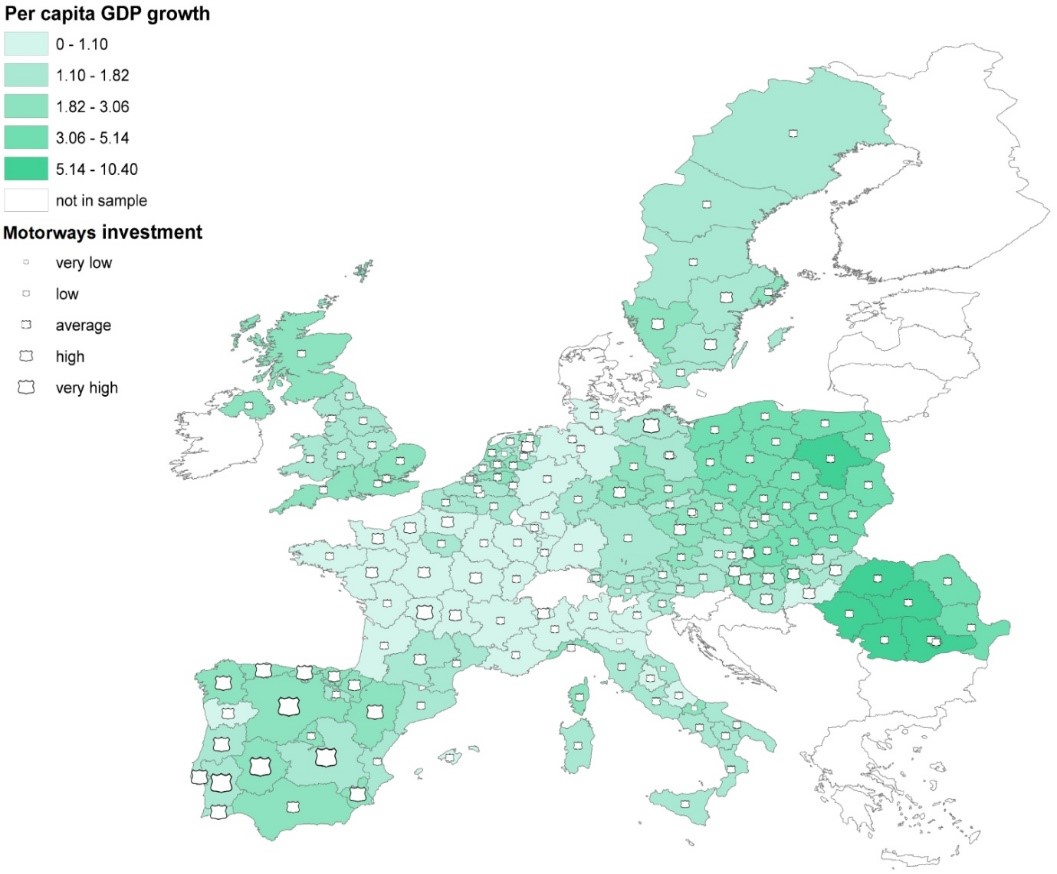 Source: Own elaboration with OECD and Eurostat data 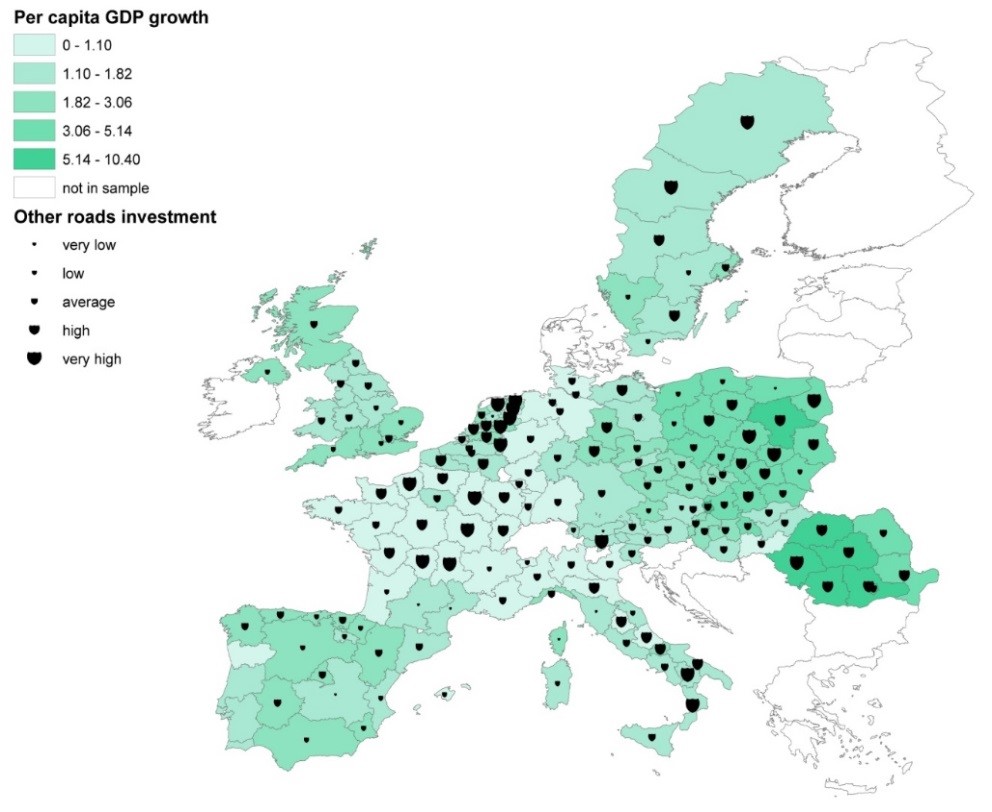 Source: own elaboration with OECD and Eurostat data

In order to empirically investigate how government quality shapes the links between transport infrastructure investment and regional growth in Europe, we estimated a basic regional growth regression where our two proxies for investment in motorways and secondary roads were respectively interacted with the Quality of Government (QoG) index, a survey-based indicator of government quality in European regions compiled by the Quality of Government Institute in Gothenburg.

As the interaction terms are included in the analysis, they reveal that:

These findings suggest that positive rates of returns from infrastructure investment are mediated by the presence of adequate government institutions. Only certain types of transport infrastructure investment are associated with higher growth across the regions of Europe. In particular, improvements in secondary road network in sound government quality conditions are linked to higher growth. By contrast, the highly popular motorway development schemes which have been at the centre of development strategies mainly in the periphery of Europe are not associated with the expected economic outcomes, even if promoted by credible, competent and transparent local governments (which is not always the case).

Our results challenge the assumption that economic performance in less developed regions in Europe can be boosted by linking peripheral locations with the economic core of the continent by means of high-cost, long-distance transport corridors. Conversely, our evidence supports the idea that investment in secondary roads might deliver better returns in peripheral areas by reinforcing intra-regional connectivity and fostering the productivity of local firms.

However, sound local institutions are key for these benefits to be unlocked via the selection of the most appropriate projects and their effective (and timely) realisation. This implies that ‘institution-building’ needs to be put at the top of the regional development agenda, if other types of development interventions – and transport infrastructure interventions in particular – are to become more effective.

A potential way to limit distortions in public investment decisions determined by political interests, pork-barrel politics, or corruption may be to set stricter rules for project evaluation and provide technical guidance to local governments lacking the administrative capacity to select the most profitable projects. Ex-ante and ex-post evaluations as well as in-itinere monitoring analyses and appraisals – despite increasing legislation in this respect – are not yet a consolidated practice in all European regions. Regions with weak government institutions require a more thorough following of their transport projects over the full cycle and stronger coordination with the central government and the Commission.

Note: This article is based on the authors’ recent paper in the Journal of Regional Science. The article gives the views of the authors, not the position of EUROPP – European Politics and Policy or the London School of Economics.

Beyond the nation state: How European cities and regions responded to the financial crisis