Bulgaria held parliamentary elections on 26 March, with preliminary results indicating that GERB, led by Boyko Borisov, had emerged as the largest party. Dimitar Bechev analyses the results, writing that despite the Bulgarian Socialist Party building on their success in last year’s presidential election to run GERB close, the results showed the resilience of the status quo in the country.

After running neck and neck with the Bulgarian Socialist Party (BSP) for months on end, Boyko Borisov won again. He is battered and bruised. He did not win big, but win he did. Preliminary results give his party, GERB, 32.6% of the vote in Bulgaria’s parliamentary elections.

The Socialists finished a close second with about 26.8%. They are disappointed, no doubt, but theirs is no mean achievement. In the last elections in October 2014, the BSP trailed much further behind Borisov (32.7% vs. 15.4%). Given the similar turnout in both elections (around 48%), it is clear the party did manage to capitalise on the momentum generated by their triumph in the November 2016 presidential elections, which were won by former general Rumen Radev. But the BSP will not rise to the position of top dog in Bulgarian politics. 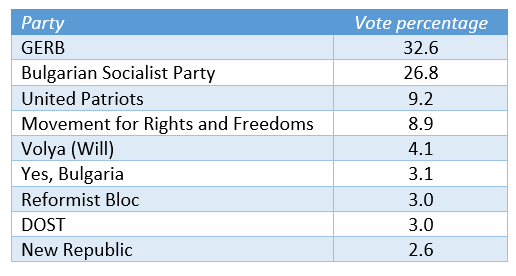 Note: Results based on the official count (89%) as of the morning of 27 March (rounded to first decimal place).

Why did the Socialists underperform even when their main rival was on the backfoot? Part of the explanation is the difference between presidential and general polls. Fielding a popular candidate against a weak GERB nominee in a majoritarian contest is one thing. Beating Borisov in general elections under the proportional representation system is quite another.

The BSP is itself in decline and it struggles to find votes beyond its hardcore of aging supporters. Long gone are the days when the party could mobilise more than a million voters. And let’s face it: in a society like Bulgaria’s, an ex-general, whether his name is Borisov or Radev, is bound to fare better than a woman, though Kornelia Ninova, the BSP’s leader, did try to outplay the boys at their own game – stirring populism and nationalist resentments.

Borisov tried to show courtesy in his first statement, in his own way: “Congratulations to our worthy partner, [it was] a manly battle, we were having a difficult time for quite a while”. GERB appears to have a stable share of the vote, which in tandem with its entrenchment of local government and business clientele fed by the steady flow of EU funds, keeps Borisov afloat.

The question is who will enter the new coalition government and under what conditions – in what will be Borisov’s third cabinet since 2009. The obvious choice would have been the Reformist Bloc, GERB’s Doppelgänger, but it seems it failed to clear the 4% electoral thresholds. But, as I did write last week, this time the kingmakers look to be the nationalist United Patriots (9.2%) and businessman Vesselin Mareshki’s Volya (Will), which obtained 4.1%.

Borisov has a history of cooperating with the nationalists, but in the last parliament did not formally bring them into the cabinet. Though they were hoping to do much better on Sunday, they will try to bargain their way to one or more ministerial portfolios this time around. Same for Mareshki who has already put forward his demand for a formal coalition, as opposed to ad hoc support in the legislature. Both Volya and the Patriots will try to twist GERB’s arm and use the threat of defecting to the BSP.

Ninova’s fortunes therefore depend on how the talks develop. She might get a second chance and we can still end up with a BSP-led government, possibly with help from the Patriots and/or from the Movement for Rights and Freedoms (8.9%). As in 2013-14, such a cabinet will be weakened by internal squabbles and pressure from GERB inside parliament.

If Borisov closes the deal first, he will try to rein in the Patriots to avoid unnecessary altercations with either the EU or neighbouring Turkey. In the run-up to Sunday’s poll, activists of the nationalist alliance twice blocked the busiest crossing point at Bulgaria’s southeast border, on the pretext of preventing “election tourism” by busloads of Turks holding dual citizenship. There were ugly scenes shown on TV, with an elderly lady in a headscarf being abused and manhandled by a group of thugs. Borisov’s instinct would be to tone tensions down, now that the elections are wrapped up. If he gets the prime minister’s job, there is no doubt that he will make sure he is the main decision-maker over foreign policy as well.

The main takeaway from Sundays’ election is that the status quo in Bulgaria is very resilient. Sure enough, populists and nationalists are a force to be reckoned with, but they are not there to shake up the system, let alone tear it down. Their game is getting a bigger share of the pie. It is more of the same as regards the Turkish/Muslim minority vote, too. The challenger, DOST, failed to deal a mortal blow to the MRF, though it peeled about a tenth of its votes away. The splinter party played the part of a convenient bogeyman for the Patriots, who inflated the threat of Turkey’s meddling in Bulgarian domestic politics to boost their vote.

Sadly, the two coalitions of anti-corruption crusaders, Yes, Bulgaria and New Republic, have had a similarly bad day. Together, those formations, backed by urban, middle-class voters, won almost 6% of all ballots cast. This was despite a smear campaign waged through some of the mainstream media, negative pre-election polls aimed at dissuading potential voters, and dirty tricks concerning registration in court and with the Central Electoral Commission. But being unable and unwilling to unite in a coalition and running competing lists resulted in a failure by the two likeminded groups to clear the threshold.

The blame game is now in full swing on social networks, where each has its ardent fans. Still, Yes, Bulgaria, founded as recently as January, did rather well in Sofia where it emerged as the third largest party. Its leaders, mostly civic activists, are hopeful that their brand of centrist politics (as opposed to New Republic’s centre-right programme) and focus on stressing the rule of law may bring in, over time, even more disgruntled voters. But the elections did prove there is a negative scenario at play, too: political naiveté in conjunction with fraught personal relations between leaders ruin the common cause. The fight for the rule of law, transparency and accountability is a thankless job in Bulgaria.

More than a year after the presidential elections, France is still in search of a leader