In Combatants of Muslim Origin in European Armies in the Twentieth Century: Far from Jihad, Xavier Bougarel, Raphaëlle Branche and Cloé Drieu offer a collection attending to the everyday experiences and practices of the Muslim combatants who fought in the ranks of various European armies, but have hitherto been neglected in many existing historical studies. The book’s non-Anglocentric approach makes it essential reading for scholars looking to deepen their understanding of the world wars, writes Sneha Reddy. 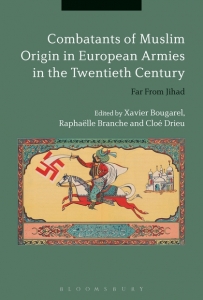 Rarely does an edited volume bring scholars with such wide-ranging expertise together to critically engage with a subject of popular debate and broaden the discussion to this effect. Combatants of Muslim Origin in European Armies in the Twentieth Century: Far from Jihad is a compilation of thirteen essays by a diverse group of contributors ranging from well-known historian Gilbert Meynier to early career researcher Julie Le Gac. Edited by Xavier Bougarel, Raphaëlle Branche and Cloé Drieu, the book explores the everyday experiences and practices of soldiers of Muslim origin who served in the European armies during the two world wars.

The book uses the term ‘Muslim’ in acknowledgement of the diverse geographic origins of the combatants, the varying imperial frameworks and the ‘web of tribal, ethnic or regional identities’ to which the soldiers adhered. The subjects in question are combatants of Muslim origin, enrolled in non-Muslim majority armies, fighting in the two world wars when the overall numbers ‘reached unparalleled heights’. The editors argue that before becoming an issue for the army, Islam was an issue for the political authorities. However, once the belligerent European powers identified Islam as a ‘politically significant religious identity’, they set out to instrumentalise it for the purposes of war. The editors also point to the history of the two world wars as an example of imperial powers overestimating the strength of pan-Islamism and, hence, the relative ineffectiveness of ‘western attempts’.

In a bid to understand the military commanders’ broader concerns and the role of religion in inspiring troop loyalty, the book’s contributors throw light on the contested perceptions and self-perceptions of the combatants as well as on the institutional challenges to military integration and food-related logistics. For instance, Kiril Feferman’s chapter, ‘Between ‘‘Non-Russian Nationalities’’ and Muslim Identity’, an analysis of Central Asian soldiers in the Red Army in 1941-45, finds that although the soldiers came from various ethnic groups, they developed a coherent religious identity and this occurred in the absence of a significant rise in their own religious awareness. This case is particularly interesting in the context of the Soviet Union, which was a non-Muslim country, facing Nazi Germany, another non-Muslim country, in the Second World War. Feferman explains that it appears quite logical when one considers the extreme conditions and competing identities, the weakening of Bolshevik appeal, the influence of Nazi propaganda and the role played by the perceptions of their comrades-in-arms.

The book’s editors point out that while the ‘modes of institutionalisation of Islam’ have been well documented, the religious practices of combatants are relatively less understood owing to the dearth of resources and, to a certain extent, a lack of interest among historians. In the chapter ‘Feeding Muslim Troops during the First World War’, Emmanuelle Cronier engages with interesting questions on food practices in the context of the global conflict, its role in enforcing discipline and invigorating morale among troops as well as its use in wartime narratives. While paternalistic views were ‘mobilised to justify’ the special treatment of imperial troops through specific food arrangements, officers were keen to demonstrate that colonial soldiers were treated the same way as the French and British. These attempts were not always consistent. In one case, several postcards from 1914 showed local women from the Marne region serving champagne to Algerian and Senegalese troops ‘as if they did not have to abstain from alcohol’. Cronier finds it striking that such postcards went uncensored because not only were they inconsistent with the official practice of alcohol prohibition, but also such depictions had the potential to arouse tensions within the local communities. The chapter draws attention to the differing local traditions and religious practices that restrict scholars from making broad comparisons about the situations of Muslim soldiers. However, as the author argues, these differences provide the scope to highlight variations in wartime experiences. This is in stark contrast to the colonial representations which, in addition to being far from reality, tended to be vague about such differences and primarily focused on the propagandistic value of the narratives.

With the conspicuous absence of the soldiers’ own voices (barring a few testimonies) and perhaps too much emphasis on administrative sources, it can be argued that this book about the ‘combatants’ treads narrow ground. Nonetheless, it is a uniquely inclusive work of scholarship in that it moves beyond the traditional focus of military history and uses a comparative framework to examine wartime experiences by studying different armies. Tanja Bührer’s chapter, ‘Muslim Askaris in the Colonial Troops of German East Africa 1889-1918′, is one such example. It demonstrates that unlike in the French Army (which is discussed by Meynier, Cronier, Claire Miot and Le Gac), German military officials were ‘either indifferent to their soldiers’ religion or even welcomed that most of the Askaris were Muslim’ as they believed that religion had a positive influence on troop discipline. In a departure from the predominant perception of threat from Islamic propaganda and its ability to undermine colonial rule as understood by the British and French commanders, German officials felt that the conversion of Africans was not worrisome. Instead, they believed that it was a nominal-pragmatic move rather than one based on ‘genuine-ideological considerations’. In turn, Bührer argues that Muslims’ motives for supporting German war efforts must be analysed as a continuity of the longstanding cooperation between the Muslims and German authorities in East Africa. More importantly, the chapter points out that the call for Jihad in the First World War did not have a positive appeal to the professional mercenaries whose Muslim identities were of a ‘rather regional character’ that reflected a certain socio-cultural lifestyle more than a pan-Islamic ideology.

Combatants of Muslim Origin effectively brings the experiences of non-western combatants in European armies to the forefront and is therefore essential reading for both scholars of military history and international relations who are keen to deepen their understanding of the world wars. In this regard, Meynier’s chapter on ‘Algerians in the French Army, 1914-1918’ is exceptional for the valuable insight it provides to the rarely discussed role of Algerian soldiers in World War I. For instance, he points out that the solidarity of the trenches created by fighting side-by-side was only a ‘temporary form of fraternity in arms’. Following the end of the war, the veterans’ associations in Metropolitan France were ‘completely unaware of the colonial situation’ and were hardly inclined to champion any progressive policy in this area.

Far from Jihad is also valuable to researchers seeking works published in English that take a non-Anglocentric approach to the world wars. It therefore adds to scholarship on related themes, such as Ian Almond’s Two Faiths, One Banner: When Muslims Marched with Christians (2009), which covers the period from eleventh-century Spain until the Crimean War of 1853-56, Nile Green’s Islam and the Army in Colonial India: Sepoy Religion in the Service of Empire (2009), which studies the particular case of the British Indian Army, and David Motadel’s more recent Islam and the European Empires (2014), an edited volume on the broader subject of Islam and its ‘accommodation’ in the Russian, French, Dutch, British and Japanese empires. Specifically, on combatants of Muslim origin, Richard Fogarty’s chapter on ‘Islam in the French Army’ in the book Race and War in France (2008) is an excellent starting point.

Historians have long lamented the impact of bureaucracy and related restrictions on scholars hoping to use official archives. This book’s contributors write of similar obstacles. Feferman, for example, regrets the limitations imposed on his research by a lack of access to the Glavnoe politischeskoe upravlenie (Main Directorate of State Security), which could potentially provide valuable details on the Red Army and the political administrations at a lower level but even today remains closed to foreign researchers. It is worth noting, therefore, that future works—subject to greater access to archives, deeper interdisciplinary engagement and more creative means of exploring combatants’ wartime experiences—have the potential to further enrich this area of research.