Book Review: Davos Man: How the Billionaires Devoured the World by Peter Goodman

Book Review: Davos Man: How the Billionaires Devoured the World by Peter Goodman

In Davos Man: How the Billionaires Devoured the World, Peter Goodman explores how members of the billionaire class have contributed to global inequality today. With the book sparking a timely conversation, Peter Urmetzer and Joel Krupa hope this enlightening work will be widely read and absorbed. 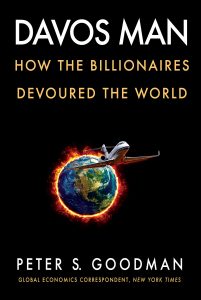 There is much talk these days about how best to address the stubborn problem of inequality. During the COVID-19 pandemic, billionaires and millionaires saw their ranks swell as stock markets soared – even as low-income workers returned to factories and blue-collar jobs were hollowed out. In his enlightening book Davos Man: How the Billionaires Devoured the World, New York Times global economics correspondent Peter Goodman outlines some of the root causes of why this is happening.

Goodman focuses on an elaborate sleight-of-hand perpetrated by global elites primarily for their own benefit. He refers to these culprits both individually and collectively as ‘Davos Man’ (a term, coined by Samuel Huntington nearly two decades ago, that refers to elite individuals who attend the World Economic Forum Annual Meeting in Davos, Switzerland). Throughout the book readers are introduced to figures including Jeff Bezos, Marc Benioff, Jamie Dimon, Steve Schwarzman and Larry Fink – as well as the increasingly monopolistic enterprises they own. Multi-billionaire elites have amassed fortunes by managing extensive investment portfolios, acquiring vast real estate holdings, privatising medical services and administrating university and public pensions. In parallel with these activities, Davos Men strategically adopt philanthropy, public relations and other tactics to ensure that the full scope of their negative influence is not understood by the public.

As they adopt the veneer of benign benefactor, Davos Men exploit accounting loopholes and disproportionately avoid contributing to the common good. By donating to political campaigns, economic elites lobby governments to reduce their tax burden, a scheme that has been disturbingly effective. As government revenues slump, resources to fund social programmes dwindle, further exacerbating income and wealth polarisation. The resulting downward pressure on wages, in combination with fewer government programmes, has hit workers across the globe particularly hard.

Goodman makes a compelling case that much malfeasance on the part of corporations and wealthy persons stems from two distinct sources: corporate tax avoidance (including the legal variants) and antitrust blocking. These are both exacerbated by political campaigns wherein special interests wield undue influence. Replete with sardonic quips that bring ostensibly dry topics like tariffs to life (‘In the Age of America First, buying coils of metal from Ontario was akin to hiring ISIS to run security at Disney World’), Goodman’s frustrated humour in Davos Man allows for easy navigation and fun reading.

Most people have at least a passing familiarity with the statistics that follow the dramatic rise in global economic inequality over the past half-century. A plethora of academics and organisations make it their business to regularly track these numbers. Oxfam has recently found that ‘The 10 richest men in the world own more than the bottom 3.1 billion people,’ an astounding figure that should raise concern among even the most ardent capitalists. Goodman draws on similar figures to paint a picture of unbridled greed contrasted with despair. What differentiates his work from similar studies is that he puts faces to these numbers by providing exhaustive background on who is responsible, who wins and who loses as a result of this growing economic chasm.

Yet rather than blame the ultra-rich who have played a major role in engineering this economic malaise, unscrupulous politicians have used this opportunity to whip up voters by generating fear and animosity through blaming immigrants and minorities. The US is a case in point. Goodman outlines how the Trump administration provided a generous tax cut to America’s economic elite while blaming economic problems on those positioned as ‘outsiders’ and on unfair trade practices. Right before leaving office, Trump also oversaw a wildly inegalitarian response to COVID-19 pandemic relief.

Goodman provides crucial details about how political and economic elites employed similar tactics in other democracies, including France, Italy, the UK and Sweden. These corroborating accounts serve as convincing evidence for Goodman’s thesis that behind-the-scene machinations instigated by Davos Man have contributed towards social unrest around the world, often laying the groundwork for authoritarianism and demagoguery. Of course, Davos Man takes no responsibility for any such turmoil, and in fact successfully exculpates his behaviour by presenting himself as an economic innovator and socially conscious philanthropist.

Davos Men, it is worth noting, are not all created equal. Few represent this principle better than the Hawaii-loving Salesforce CEO Benioff. Delightfully, Goodman takes aim at the infuriatingly ludicrous notion that ‘we are all in this together’ – a favourite talking point, shared in the book, for this ‘stakeholder capitalism’ promulgator. Benioff – generally seen as relatively benevolent by virtue of his work fighting homelessness in San Francisco and other worthy causes – is not viewed charitably by Goodman. He appears to believe that Benioff is in fact worthy of significant derision due to his attempt to sterilise the dangers of unregulated capitalism. Of course, it is not fair to paint all billionaires as the same – Warren Buffett famously penned a New York Times opinion editorial calling for tax increases on the ultra wealthy, and both Bill Gates and Mark Cuban have also publicly voiced this sentiment.

Three core takeaways are presented in the book. First, tax reform should be pushed forward (although ‘reform’ is a favoured term of the elite interested in securing concessions, it is the right word). Davos Man’s story is, to a large extent, one of minimising taxes. Goodman’s view is that changing taxation policy is essential: as one particularly noteworthy example, he cites $60 billion in legalised tax avoidance by US companies per year. The economic euphoria surrounding the time of the Robber Barons, followed by the Great Depression and the New Deal policies of US President Franklin D. Roosevelt, saw much higher corporate marginal tax rates for corporate, dividend and capital gains taxes. These need to be brought back, perhaps with redistributive estate taxation to boot.

Second, vigorous antitrust enforcement can allow capitalism to be at its best, wherein innovation is incentivised and no one grows too big. Lina Khan, the current head of the Federal Trade Commission, wrote a seminal piece on how this has happened in the case of Amazon. Yet others are potentially guilty of the anticompetitive issues she outlines, such as cross-industry integration and predatory pricing. While a seemingly boring and obscure topic, we must not lose sight of antitrust’s criticality, Goodman reminds us.

And three, related to the above, is campaign finance reform. In most economies there exists an uncomfortably close relationship between economic and political elites. Through the lobbying of governments and the funding of political campaigns, corporations have captured the political class. The often unsaid quid pro quo of this association is that in return for generous political donations, the corporate class is rewarded with tax cuts and other favours. This relationship is particularly evident in the US, but present in all capitalist economies. In order for democracy to be more effective, governments have to become more independent of corporate influence.

It’s difficult to criticise such a useful book, but minor quibbles are present. The major fault in this text is that, like all great polemics, the writing does not do enough to outline other determinants of the current status quo, maintained by an enduring set of cultural values that leads us to worship power and status and often countenances, even celebrates, avarice. This ties into the second flaw. Specifically, in targeting select people for case studies, Goodman’s helpful list of both Davos Men and their enablers – including the abovementioned billionaires alongside political figures like French President Emmanuel Macron and non-profit leaders like Klaus Schwab – seems incomplete. But at least Goodman has sparked the right conversation, and we hope Davos Man is both widely read and absorbed.

Note: This review first appeared at our sister site, LSE Review of Books. It gives the views of the author, not the position of EUROPP – European Politics and Policy or the London School of Economics. Featured image credit: Jonathan Francisca on Unsplash

Peter Urmetzer is an Associate Professor Emeritus of Sociology in the Department of History and Sociology at UBC’s Okanagan campus in Kelowna, British Columbia, Canada. 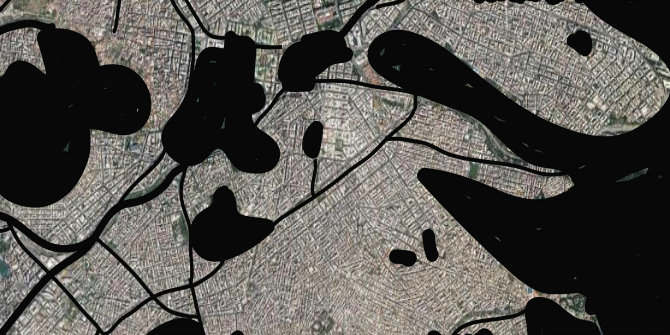 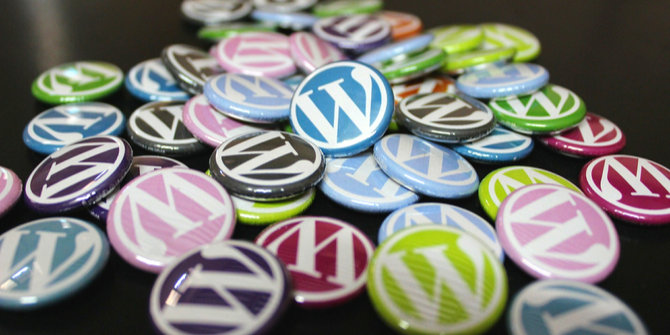