Italy goes to the polls on 4 March to elect a new government. Where do each of the main parties stand on the key issues? Eleonora Poli assesses the party platforms on the Italian economy, migration, and defence, noting that the fragmented political picture will make it exceptionally difficult for any long-term government to emerge that can rule the country for the next five years. 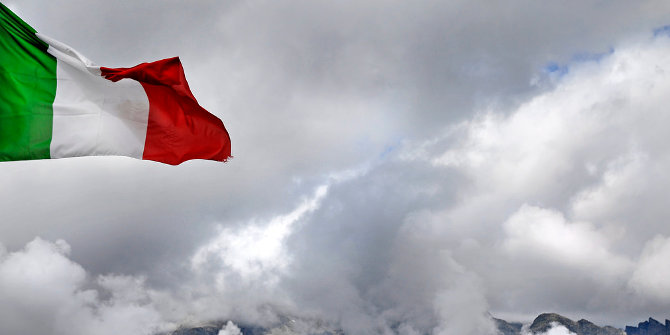 The Italian election on 4 March will come after a year in which the country, alongside the rest of the EU, has experienced positive economic trends, including stable growth and falling unemployment. Nevertheless, most Italians are still dissatisfied with the status quo, and both the government and the EU are receiving the blame for not addressing their concerns. But where do the parties stand on each of the main issues? This article presents an overview of the main party platforms on the economy, migration and foreign policy – and how views on the EU are underpinning the debate.

The recent positive economic figures have not yet translated into better livings standards or increased social guarantees for Italian citizens. This explains why 82% of citizens are still convinced the country is heading in the wrong direction, while 62% are worried about jobs, and 35% about poverty and inequality. Although the EU is not typically at the forefront of Italian political debates, it is indirectly relevant to many of the key political issues being discussed during the election campaign. Formally, no major political party supports leaving the EU, but views on issues like the economy, migration and defence are often divergent.

With respect to European economic governance, all of the main parties generally agree with the principle of a reduction in austerity and more social spending. Yet the route to achieving this varies from party to party. On social welfare spending, the right-wing coalition that includes Silvio Berlusconi’s Forza Italia and Matteo Salvini’s Lega believes that Italy should promote social conditions primarily by facilitating competitiveness, economic growth and free trade. They plan to cut tax to stimulate investment and reduce tax evasion by introducing a flat tax system to replace the current progressive system. They aim to increase pension payments and modify the recent retirement law which fixed the retirement age at 67. The raising of the pension age was welcomed elsewhere in the EU as a mechanism for reducing Italian public spending, but the right-wing coalition has justified rolling back the retirement age on the grounds that it will reduce youth unemployment and boost competitiveness.

The left-wing coalition led by Matteo Renzi’s Democratic Party (PD) would prefer to invest in general social welfare, including for young citizens and families. But views on the left are diverse. Liberi e Uguali, which is not part of the PD’s coalition but is still located on the left, would like to boost the economy by scrapping both the raised pension age and the ‘Jobs Act’ put forward by Renzi when he was prime minister. Meanwhile, +Europa, which is part of Renzi’s coalition, has stated that Italy cannot realistically abandon austerity altogether. They argue that the reduction of Italian structural debt, which amounts to 134% of GDP, is mandatory not only because of the EU, but also to boost economic growth, which in the long-term will benefit younger generations. Indeed, although in recent years Italy has kept its primary deficit below the Maastricht 3% threshold and has given, rather than received, money to help countries such as Spain, Portugal and Greece, its public debt is among the highest in Europe, and because of limited economic growth, it remains a major problem.

The Five Star Movement, which currently tops the polls, has significantly moderated its once staunchly anti-European positions, notably by abandoning any move toward exiting the Eurozone. But it still holds a substantially critical position when it comes to European integration. It routinely attacks what it views as rigid European economic and fiscal policies, and supports a basic income scheme which would enable all unemployed citizens to receive a fixed income from the state in exchange for the provision of public services until they find a job. The unemployed would be entitled to refuse up to three job proposals before losing their right to the basic income.

In an already sharply fragmented Italian society, the migration crisis has undoubtedly deepened divisions, highlighting a perceived inability to act on the part of the Italian government.

Although the numbers of migrants arriving have been reduced since 2016, the country still registered 119,369 arrivals in 2017, and since the beginning of 2018, it has recorded 4,740 migrants arriving on the Mediterranean coast. The majority of those who arrive have come from African countries, including Nigeria (15.7%), Guinea (8.4%), and the Ivory Coast (8.3%), and large numbers of those arriving do not qualify for asylum.

For the parties on the left, the general approach has been that those migrants who arrive should be integrated into Italian society, but that the flow of migrants must be controlled through ad-hoc agreements with the countries of origin. The right-wing coalition, and indeed the Five Star Movement, have been particularly keen to emphasise the need for the EU to do more. They advocate reforming the Dublin Treaty and stopping migrant flows at the source. Yet there is a lack of concrete proposals on how this should be achieved.

When it comes to EU external relations, all major parties agree on the idea that the EU and Italy should foster cooperation in the fight against terrorism, and should exchange relevant information, potentially through a shared European defence agenda. The major source of contention lies in the EU’s relationship with Russia. While no Italian political party is formally anti-Russian or believes that Russia represents a threat to European security, the Italian government has so far respected the position adopted by the EU on Russian sanctions. However, the right-wing coalition has been keen to emphasise that polarising diplomatic ties with Russia was not an effective strategic move for the EU, and has suggested a more conciliatory approach which could include scrapping sanctions.

For the Five Star Movement, Russia is not an enemy, but rather an essential partner. This is particularly true for the party when it comes to stabilising the Middle East. They have argued that sanctions have cost Italy 3.6 billion euros, that they should be lifted, and that Italy should recognise the independence of Crimea from Ukraine. The general line taken on the Ukraine crisis is that it arose from EU and US meddling in Russian affairs. At the same time, ties between Lega and the Kremlin have been an object of interest, with the party even facing the accusation of being financed by Russia. As such, the result of the Italian election could potentially disrupt the EU’s unity on its approach.

What will the result mean for the EU?

As things stand, any government led by the right-wing coalition would not be expected to pose a challenge for the EU as Forza Italia could in principle block the anti-EU aspirations of its coalition partners. But such a coalition will likely not be able to govern without finding alliances with other parties.

The PD have maintained that they will not enter into government with the right, but this could be tested if the alternative would be to see the Five Star Movement take control of the country. The party could find itself in a difficult position as its credibility would be damaged by entering into a government with parties like Lega, but with falling support in the polls, it is highly unlikely the PD will have enough support to lead a government. The Five Star Movement stands to gain more support than the PD, but without enough support to govern by itself. Coalitions with other parties are possible, and the potential scenario of the Five Star Movement and Lega coming together is one that has attracted a great deal of interest given it would significantly challenge the EU status quo.

Some 40% of Italians have indicated they are indecisive regarding their voting choice, so much remains uncertain. The most realistic scenario is a short-term government that could potentially revise the current electoral law. The prospect of a government emerging from the election that will rule the country for the next five years appears remote. But just as the EU appears to be back on track, political uncertainty in Italy, one of the EU’s biggest economies, will be far from welcome, particularly if Euroscepticism moves into the spotlight in what has traditionally been a highly pro-EU country. Alternatively, a politically weak Italy could find itself on the sidelines in any future attempt to restructure the EU.

Eleonora Poli – Istituto Affari Internazionali
Eleonora Poli is a researcher at the Istituto Affari Internazionali (IAI), where she is working on research projects dealing with the EU economic policies, the political and institutional implications of the Eurozone crisis and the European role in regional conflicts resolution. Eleonora holds a PhD in International Political Economy from the Department of International Politics at City University London.