The European Conservatives and Reformists (ECR) are currently the third-largest group in the European Parliament, but with Brexit set to deprive the group of one of its largest members – the UK’s Conservative Party – there is uncertainty about the ECR’s future trajectory. Martin Steven writes that despite Brexit, there is every indication the ECR will continue after the next European Parliament elections in 2019, but it remains to be seen whether the group will shift in a more Eurosceptic direction or maintain its relatively neutral identity as a vehicle for free market conservatism.

The ECR is the main voice of Conservatism, as opposed to Christian Democracy, in European Union politics – the group’s MEPs argue for an EU which places greater emphasis on free market economics and less on trying to choreograph ‘ever closer union’. For this reason, the ECR’s driving force, the British Conservative Party, had never been comfortable sitting alongside Christian Democrats in the European People’s Party, and in 2009 it formally split from the EPP. The ECR has become a permanent feature in EU affairs in Brussels – and currently holds the balance of power as kingmaker beyond the grand coalition of the EPP and the Progressive Alliance of Socialists and Democrats (S&D).

In particular, the ideological differences between the FDP and the ECR’s German delegation, the Liberal Conservative Reformers (LKR), are surely miniscule, and one might have thought some sort of merger within Germany may be possible here – indeed, there were some formal talks in 2015 but they ultimately came to nothing. If leading ECR figures such as Jan Zahradil, the ‘Thatcherite’ Czech Civic Democrat (ODS) MEP, could persuade even two out of these four parties to join the ECR, its image as the EP’s party of trade and free market economics would be secure. In 2014, Belgium’s biggest party, the right of centre New Flemish Alliance (N-VA), chose to leave EFA and join the ECR, so there is already a precedent for how the group can approach the process. 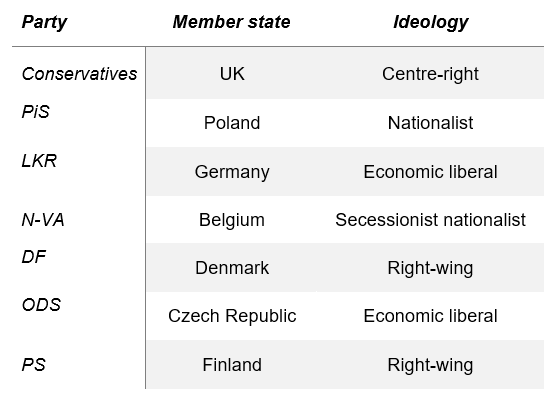 It is Fidesz, as well as Austria’s Freedom Party (FPÖ), that are presently looking the likeliest candidates to join the ECR as the group tries to cement its position as the leading ‘critical voice’ in the European Parliament – yet if that is the ambition of some of the ECR’s leadership, that would represent a shift away from its relatively neutral identity as the vehicle for free market conservatism that it enjoys at present. It would also refute the argument currently deployed by the ECR that it is not Eurosceptic at all but ‘Eurorealist’, the voice of common sense in the EU and its only true ‘honest friend’.