A European Deposit Insurance Scheme (EDIS) has been proposed as part of efforts to complete the European Banking Union, but some actors have raised concerns about the implications of banks with non-performing loans entering the EDIS. Presenting findings from a recent study, Markus Demary writes that some banks are not yet ready for a European Deposit Insurance Scheme and that vast amounts of money will need to be invested to get them in shape.

The European Commission is increasing its pace towards completing the European Banking Union. A European Deposit Insurance Scheme (EDIS) should be the Banking Union’s third pillar. Germans are very sceptical of EDIS, in part because Germany has never had a single deposit insurance scheme. Instead, cooperative banks, savings banks and private banks administer their own deposit insurance systems without the possibility of transfers between the systems.

Moreover, Germans fear that banks with non-performing loans (NPLs) from the last crisis on their balance sheets will enter EDIS. They expect these loans to default, leading to a mutualisation of losses. Therefore, the German government favours a reduction of NPLs before the introduction of EDIS.

In a recent study, I intend to quantify the risks arising from NPLs and the restructuring costs for getting banks in shape for EDIS. Therefore, I have constructed a dataset with 76 banks under the direct supervision of the Single Supervisory Mechanism (SSM) of the Banking Union by using data from Bloomberg, Fitch, Moody’s and the banks’ financial statements.

The distribution of NPLs across banks

The data reveal that more than half of the banks in the sample have NPL ratios of 5 per cent and lower (figure 1). These banks supply more than three quarters of the loan volume of the sample and have 41.6 per cent of the NPL volume on their balance sheets. Thus, a significant fraction of the overall NPL volume is located in banks with low NPL ratios. These banks should be able to tackle their NPLs on their own. But 22.8 per cent of the NPL volume, which is located in banks with NPL ratios of 20 per cent and higher, is more problematic. These banks will have a hard time tackling NPLs on their own.

Figure 1: The distribution of banks with different NPL ratios 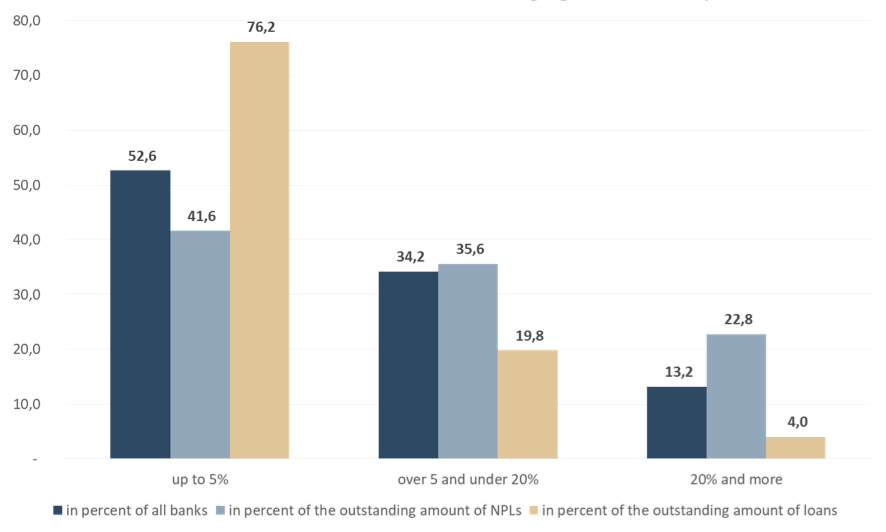 In order to get insight into the banks’ ability to tackle NPLs by themselves, I differentiated NPL ratio categories in 2012 and then calculated how many banks remained in their category by 2017 or changed their 2012 category by 2017 (figure 2). Most of the banks with an NPL ratio of 3 per cent and lower in 2012 remained in this category in 2017. Only a small fraction of these banks had a worse NPL ratio by 2017. However, no bank with an NPL ratio of 25 per cent or higher in 2012 was able to improve its NPL ratio by 2017. It is also worrisome that all banks with an NPL ratio between 20 and 25 per cent in 2012 have a worse NPL ratio in 2017. This indicates a divide in the banking sector: Banks with low NPL ratios contributed positively to the decline of the Euro area NPL ratio, while banks with high NPL ratios contributed negatively to this decline. 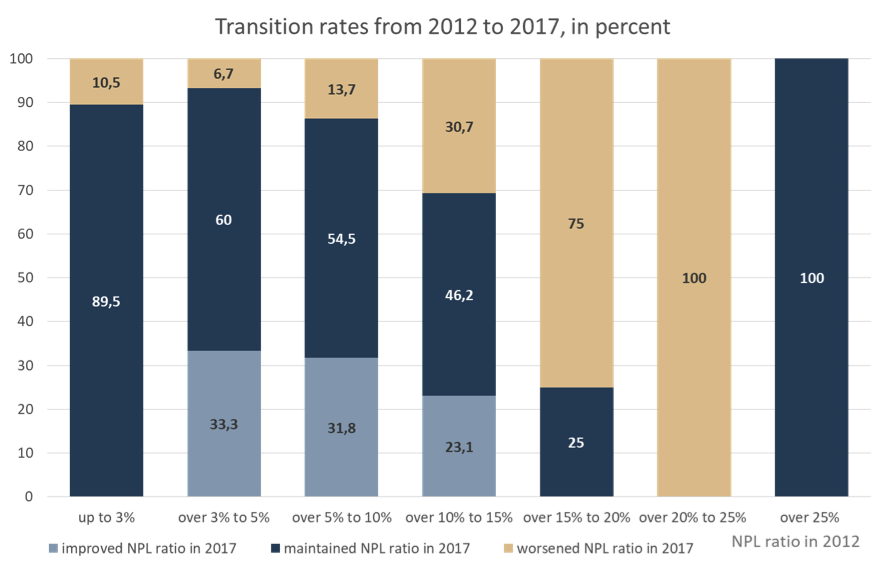 Which improvements are possible?

Second, I simulated an additional write-off such that all banks had an NPL ratio of less or equal to 3 per cent after the write-off. As a result, a large share of banks would need to be recapitalised under this scenario because their capital buffers are too low. This is particularly true for banks in Greece and Cyprus, while banks in the other former crisis countries will withstand such a write-off. 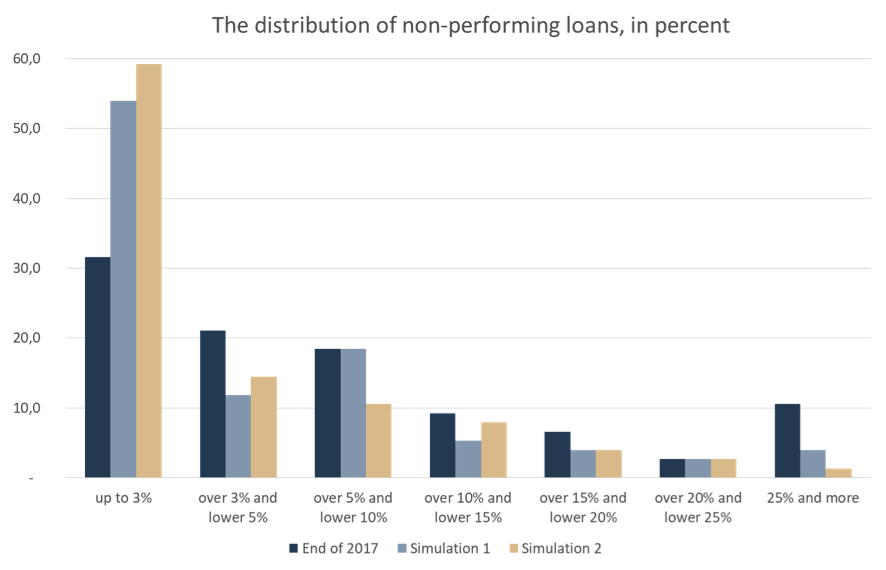 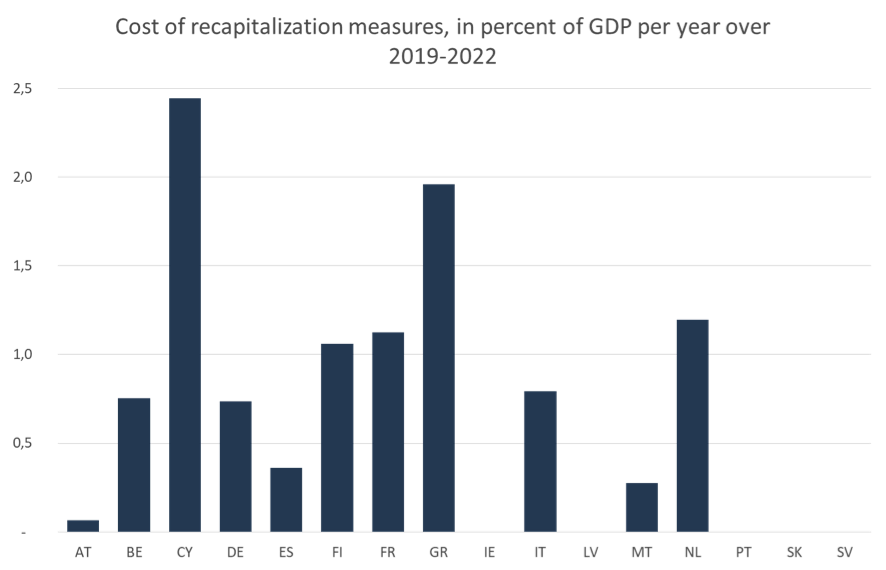 Not fit for EDIS yet

I conclude that some banks are not yet in shape for EDIS and that vast amounts of money need to be invested in order to get them in shape. Other measures for tackling NPLs, like selling NPL portfolios to investors, are more cost-efficient, but take a lot more time to reduce NPLs. Therefore, it is questionable whether NPL levels of high-NPL banks could be significantly reduced before the start of EDIS.

Note: This blog post is based on the author’s paper Tackling Non-Performing Loans in the Euro Area: What are the Costs of Getting Banks Fit for a European Deposit Insurance Scheme?, IW-Report 16/2018, and originally appeared at our sister site, LSE Business Review. It gives the views of the author, not the position of EUROPP – European Politics and Policy or the London School of Economics. Featured image credit: Photo by Norbert Nagel (CC BY-SA 3.0)

Markus Demary – Cologne Institute for Economic Research
Markus Demary is senior economist in the research unit financial and real estate markets at the Cologne Institute for Economic Research (Institut der deutschen Wirtschaft Köln). He studied economics at the Rheinische Friedrich-Wilhelms-Universität Bonn and he holds a doctoral degree from the Christian-Albrechts-Universität zu Kiel. He is also a lecturer in Behavioural Finance at Ulm University. 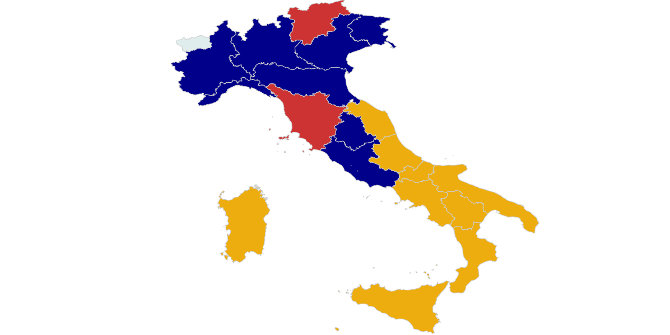 The lesson from flight MH17 is that in a time of war, safety must come before the profits of airlines