State elections were held in Bavaria on 14 October, with both of Angela Merkel’s partners in the German government – the CSU and SPD – suffering large losses. John Ryan notes that more bad news for Merkel could potentially follow in two weeks’ time at the state elections in Hessen, and that the result underlined the continued fragmentation of the German party system since the 2017 federal elections.

Angela Merkel’s Bavarian partners, the Christian Social Union (CSU), suffered their poorest result since 1950 in a humiliating state election result on Sunday with 37.2 per cent, down 10.4 percentage points from the 2013 Bavarian election. Her second grand coalition partner, the Social Democratic party (SPD) suffered their worst ever result in the history of Federal Germany by losing over half their support and now have around 9.7 per cent of votes, down 10.9 percentage points.

These results will call into question the future viability of the embattled CDU/CSU/SPD coalition government. The Free Voters in Bavaria (Freie Wähler Bayern), which is a regional umbrella organisation, received 11.6 per cent, up 2.6 points from 2013. The big winners have been the Green party gaining 8.9 points to reach 17.5 per cent of votes and the Alternative für Deutschland (AfD, Alternative for Germany) who enter the Bavarian parliament for the first time with 10.2 per cent. Voter participation, at 72.5 per cent, was at its highest level for almost 40 years.

The CSU’s poor performance starts the process of searching for scapegoats. Bavaria’s Minister-President Markus Söder has blamed Chancellor Angela Merkel and especially his own party boss and predecessor Horst Seehofer. Ahead of the election, Horst Seehofer had unveiled his plan to overhaul Germany’s asylum system in a bid to stem a draining of votes from the CSU to the AfD. Of the 63-point plan, number 27 was considered to be the most contentious. It called for the reestablishment of border controls with Austria, and the ‘refusal of entry to anyone who has already applied for asylum in another EU member state’. Merkel said that she was vehemently opposed to reinstating German border controls out of concerns that other European governments would do the same, thereby triggering a domino-effect that would effectively end the free movement of people within the so-called Schengen Area. Currently, the Area comprises 26 European states that have abolished passport controls at their mutual borders.

Seehofer responded to Merkel’s concerns by giving her time to find a European solution. An EU Summit in Brussels on June 28-29, described as the ‘mother of all summits’ because of its impact on Merkel’s political future, attempted to bridge the differences among EU member states over migration policy. After a marathon negotiating session, EU member states agreed to a series of vague promises that there should be ‘a shared effort’ on migration but ‘only on a voluntary basis’. 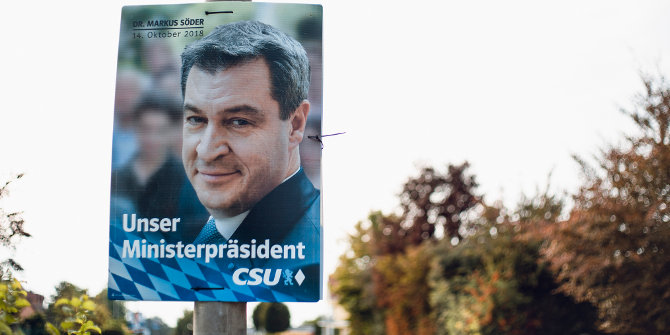 As the AfD established itself with electoral victories and a constant media presence, the traditional conservative parties in Germany and other European countries have also marched to the right. Similarly, ‘tough on immigration’ politicians have risen in influence among Bavaria’s foreign neighbours, and their leaders – men like Sebastian Kurz, chancellor of Austria, and Prime Minister Viktor Orbán in Hungary – are popular with CSU politicians. This year members of the CSU have ordered the introduction of Christian crosses in state buildings, to give an example.

Looking at the strong election result of the Greens, it would be taking it too far to put the rise merely, or even mainly, due to the rise of the AfD. Over the past years, the Green Party has gradually moved to the political centre, a shift that seems to have paid off. According to recent polls, the new supporters swelling the ranks of the Green Party on average are more centrist than the party’s traditional voter base. The party also profits heavily from the decline of the SPD, which saw its votes more than halve in Bavaria from 20.6% in 2013. While the SPD bleeds voters in all directions, for many of their young, cosmopolitan voters, the Greens are the natural alternative.

The CSU will be in need of a coalition partner, potentially even two. The obvious choice would be a CSU-Greens alliance which would give them a healthy majority in the 200 seat Bavarian parliament. There are though serious policy differences on migration, the economy, civil liberties and law-and-order between the parties.

The CSU could decide to start coalition talks with its centre-right competitor, the Free Voters in Bavaria, which would give them a slim majority. To make this alliance stronger, it may decide to also work with the Free Democrats (FDP), narrowly through at 5.1 per cent of the vote (up 1.8 points), in a three-way coalition.

More bad news for Angela Merkel may come in two weeks’ time in the Hessen regional election whose capital city is Frankfurt, the financial centre of Germany. The spiral downwards for the CDU/CSU and the SPD was confirmed by an ARD-Deutschland Trend opinion poll on 11 October where 26 per cent said they would vote for the CDU/CSU and 15 per cent for the SPD. The Greens were on 17 per cent and the AfD on 16 per cent, both ahead of the SPD.

What these regional elections are showing is that the fragmentation of the political system has been gaining momentum since the 2017 German national elections.