While European economies have recovered to an extent from the financial crisis, many observers still regard this recovery as underwhelming. Based on research presented to the European Parliament, Eddie Gerba argues that unless there is a major rethink on monetary and fiscal policy, advanced economies may be faced with low growth, income disparities, and a deficient financial system in the years to come.

The euro area economy has undergone remarkable changes over the past few decades. Besides the formal establishment of the single market and the monetary union, the role of the banking and financial sector has greatly increased since the 1990s.

Alongside my colleague Danilo Leiva-León, I have estimated and examined the interactions between macroeconomic and financial cycles as part of research for a forthcoming paper. This research sheds light on the current situation faced by the Eurozone and the United States, as well as their prospects for future growth. 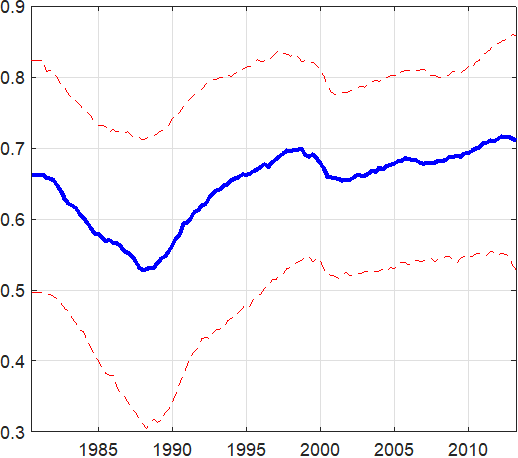 Considering that a correlation coefficient of 0.9 or above is considered to be an (almost) perfectly correlated series, the two cycles have become highly synchronised over the past decade. Furthermore, from Figure 2 it is clear that financial cycles are, on average, longer, more volatile, but less erratic than macroeconomic cycles. Yet, despite those differences in their statistical properties, the correlation is very high.

Figure 2: Evolution of euro area financial and macroeconomic cycles between 1980-2014 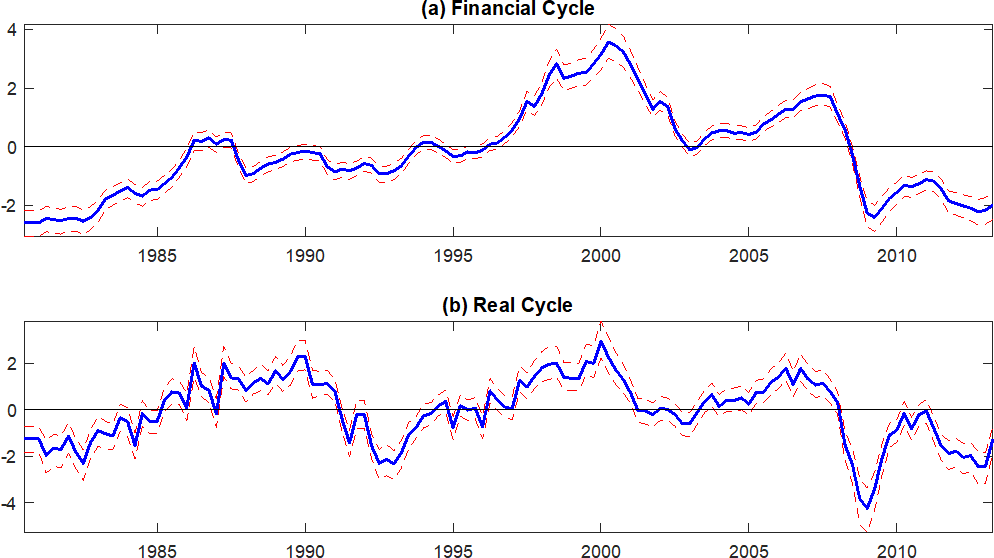 Focusing on the last quintile in Figure 2, it seems that the two cycles have been much below the trend ever since the 2008 crises. On average, the financial cycle seems to be slightly below the macroeconomic cycle since the start of the recession, while their correlation appears to be almost perfect. We also ran a number of estimations and counterfactual exercises and found that there are strong mutual feedbacks between financial and real sectors, and that the magnitude of these cross-impacts has more than doubled over the past two decades.

Likewise, we found that financial shocks have had a (relatively) higher impact on the macroeconomy since the mid-1990s, while during the same period, the persistence in the tranmission has been higher for macroeconomic shocks. Taken together, this suggests that there is an important feedback loop between the two sectors, which can explain the prolonged current downturn. The initial shock was generated in the financial sector, which caused a severe macroeconomic downturn. However, the downturn was so heavy that it sent negative prolonged disturbance to the financial sector, causing a delay in financial sector recovery, and so on.

At the same time, in another study with colleagues from the ECB, I and my co-authors have characterised a number of macro-financial great ratios (as shown in Figure 3). During the period 1980-2014, liabilities-to-GDP (red line) experienced a tremendous growth of around 900 per cent in only 30 years. In 1980, it was 50 per cent of GDP, while at the start of the Great Recession it had accumulated to 450 per cent. More narrowly, bank liabilities were at par with GDP around 1990, while they grew fourfold during the subsequent 20 years.

Still this expansion in bank liabilities did not come from savings deposits (green line). Those, on the other hand decreased over time, from 15 per cent of GDP in 1980 to 6 per cent in 2010. This implies that the growth impetus came from inside the financial sector, or from outside of the euro area. Considering that modern universal banks create deposits when issuing loans and securities, finance other banks, or raise liquidity from the non-bank financial segment, it is highly likely that this increase has come from within the financial sector. In other words, the financial sector has managed to grow endogenously while supporting growth in real sector activities beyond the standard real balances or equilibrium. 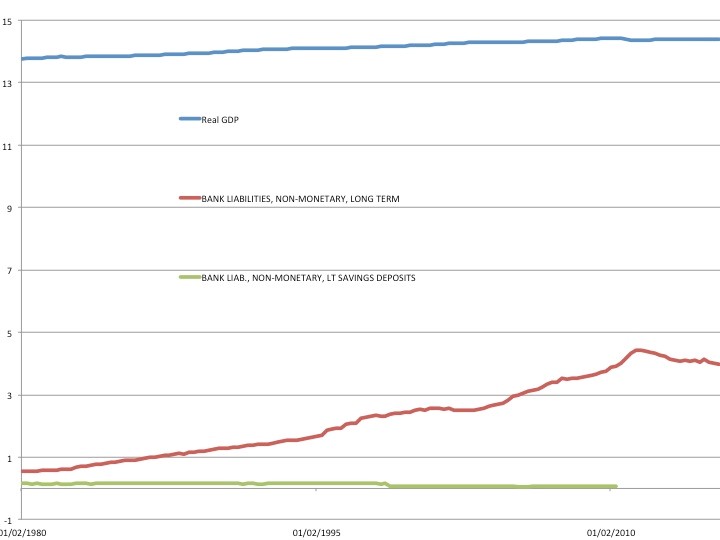 Simultaneously, a number of other long-run transformations have occurred in most advanced economies. While they are not novel insofar as they have unexpectedly appeared at a particular point in time, they have just recently been covered by the academic literature. Their progress has been gradual, but their effects have only recently been measured. The topics include: a decline in productivity, a reduction in the labour force and an ageing population, labour crowding out, and a deterioration in income growth for the vast majority of the population.

Most of the policies proposed in the literature to tackle the challenges of low growth are structural, which means that their effects will only be measurable in the medium-to-long run. Yet, the current literature is silent on how monetary policy should adapt to the new environment. Although it is highly likely that the negative (or zero) rate will remain in place in the euro area (and some EU economies) for the foreseeable future, it is highly likely that this will not be enough to counteract the imbalances and respond to the structural changes that have emerged over the past two decades.

First, despite some deleveraging over recent years (more in the US than the euro area), the debt overhang is still a problem. Unconventional quantity-based instruments will still be required to support further corrections in the balance sheet of the private sector while reducing non-performing loans or other ‘bad debt’. This needs to be well tailored in accordance with microrpudential and macroprudential policies to ensure good and stable transformation of the private sector balances.

More fundamentally, serious considerations should be given to reformulating monetary policy in terms of objectives, targets, and instruments. The current consensus on conventional monetary policy was built during the Great Stagflation and the reintroduction of volatility resulting from the collapse of Bretton Woods. But the challenges today are very different. The ‘new monetary policy’ should be much more considerate of low growth prospects, the interplay between macroeconomic-and financial cycles, private sector balance sheets, and interaction with other policies, in particular financial policy.

In this new economic environment, it is important for monetary authorities to have at their disposal a number of instruments, as well as clearly defined and consistent objectives, and most importantly, to engage more broadly with the financial sector and understand the currents and developments within it in real time. Now more than ever the monetary phenomenon has become a financial phenomenon. Therefore, creative insights from financial-monetary theory will be necessary to guide future monetary stances.

Note: This article is based on a paper presented to the European Parliament. The article gives the views of the author, not the position of EUROPP – European Politics and Policy or the London School of Economics. Featured image credit: Frank Lammel (CC BY-NC-ND 2.0)

Eddie Gerba – LSE
Eddie Gerba is a Visiting Fellow at LSE, Distinguished Affiliate of CES Ifo Munich, and an Advisor to the European Parliament on Monetary Affairs. He is the author of Financial Cycles and Macroeconomic Stability: How Secular is the Great Recession? (Lambert Academic Publishing, 2015).