Throughout Greek history, economic crisis has been the impulse for progress. Michael Cottakis argues that today, again, a crisis must be used to spark a brighter dawn for the country. Greece’s future depends on the emergence of a youthful new movement of entrepreneurs to supply the country with new economic dynamism.

Pre-classical Greece was one of the Mediterranean’s poorest regions. In the 6th century BC, the average per capita GDP of sixteen poleis of Greece was equivalent to just €400 per year. Neighbouring Anatolia and Egypt performed far better, with GDP of €700 and €900 respectively. Within a century, the tables would turn. By the 450s, the GDP of the same poleis had exceeded the combined averages of Anatolia and Egypt, achieving standards of living unmatched for centuries to come.

Much of this success was the product of a youthful entrepreneurial spirit, forged in defiance to the prevailing poverty. It was a series of catastrophic famines that compelled poleis of the Archaic period to send their enterprising young men beyond Aegean shores. The trading outposts they established would flourish into great cities, and shape Mediterranean civilisation for centuries. Later, the barren landscape of Attica forced young Athenian olive-growers to take up pottery and sculpture, bringing considerable riches to Athens. More recently, the ravaging effects of Nazi occupation and brutal civil war at home saw ambitious young merchants take to the seas, helping to fuel the Greek Shipping Miracle.

Today’s youth faces different challenges. While no generation since the War has been better educated or more international, none has enjoyed fewer opportunities. Since the start of the crisis, the Bank of Greece estimates that around 400,000 Greeks under 40 have emigrated. Of those who remain, 54% are without work. The average Athens job is uncompetitive and low-wage, and fails to guarantee the security and independence – so coveted by young professionals – of its London or Berlin equivalent. 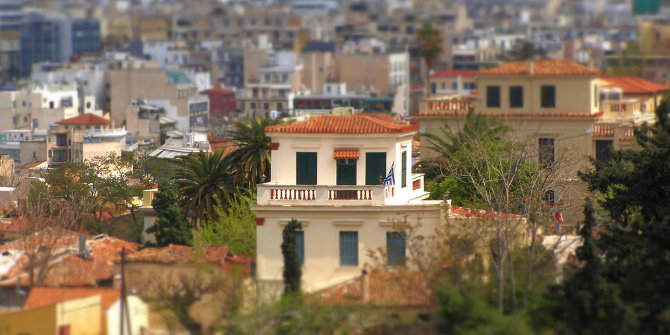 The perceived lack of opportunity, besides feeding the proverbial ‘brain drain’, breeds apathy and frustration with conventional politics and encourages the young to choose more radical political options. Yet economic crisis is Greece’s chance for a relaunch; and it is an opportunity the country must seize. Harnessing Greece’s entrepreneurial potential is the key to its recovery.

Second-generation Greeks are the single most entrepreneurial group in the US. The contrast with the situation in their homeland is stark. Greece is among the worst performing EU member states on entrepreneurship, with indicators showing poor performance in start-up numbers and innovation, as well as persistently negative attitudes towards entrepreneurship as a profession.

The particular development of the Greek state has created an environment unfriendly towards the entrepreneur, to whom public interests have been long in opposition. Through mass hirings, corrupt procurement policies and over-investment by the state, parties sought to capture special interests to secure electoral success. The toxic relationship between the state and big industry, in particular shipping, decreased entry points for new firms attempting to grow. A vicious cycle ensued in which the incentive to become an entrepreneur was small.

Older legacies persist also in Greece’s informal institutions – the norms, codes of practice, and behaviours embedded in society. The country’s vassalage by the Ottoman Empire created a special context for this, with inheritances of rent-seeking, crony capitalism, and corruption pervading state-society relations. In structural terms, the inefficient management of regional resources exacerbated by over-centralisation and ineffective regional administration has stymied economic activity and reduced incentives for entrepreneurs.

To unlock the potential of entrepreneurs in Greece, a set of regional growth strategies must be developed through cross-sectoral dialogue involving the state, private sector, and academia. These growth strategies should not be super-imposed upon the country’s existing regional departments, but must be structured more intuitively around major population centres, university clusters, and geographical features.

In recognition of the country’s historical strengths, they must centre on industries in which Greece’s regions hold a comparative advantage given their geography, culture, and human capital, industries where there is an international market that will allow Greece to become a producer and exporter, and industries which are set to see considerable growth in coming years. In already established industries, Greece will struggle to compete with its peers. But in emerging ones – alternative energy, agricultural tech, mobile robotics, aerospace – it may yet become a leader.

To support the execution of the new growth strategies, innovation hubs must be set up which pool public and private resources, similar to Local Enterprise Partnerships (LEPs) in the UK. These must support and educate community entrepreneurs and help them to better deliver their goals. Beyond mentorship, they would also provide seed funding to start-ups. Innovation hubs would perform a broader function, acting as a meeting point between groups in different fields which facilitate professional and personal connectivity as well as the development of common projects.

Of course, Greece’s recovery will need more than a set of regional growth strategies. Deep structural reform of the state, particularly wholesale reform of the labour and product markets, must occur in tandem. It will also require political entrepreneurship and a willingness among the youth to run for elected office, instilling Greek politics with fresh vitality to break a corrupt and inbred system.

Perhaps most importantly, policy initiatives must address the informal institutional weaknesses in Greek society – corruption, clientelism, and social conservatism – that impede its development as an entrepreneurial force. This goes beyond simply the government of the day and will require consensus across party lines, and within civil society. Within this, educational reform is key.

Like Anatolia and Egypt in the 550s BC, Greece’s Western European neighbours are richer per capita, more productive and more competitive. But the past offers a unique understanding. Yet again, crisis must be used as a platform for an economic revival built around innovation and entrepreneurship in sectors in which Greece holds a comparative advantage, and which are emerging industries on the global scale. The types of reform needed to achieve this will involve input from various groups in society, not merely the political elites. Business groups, the diaspora, civil society, and educators will be key not only in the pursuit of these elusive reforms, but in their design and implementation.

As the country enters its eighth year of crisis, and poverty destroys ever more livelihoods, time is of the essence. Today, as before, entrepreneurship offers Greece its best escape route.