On 13 January, Paweł Adamowicz, the Mayor of Gdańsk, was fatally stabbed during a charity event. Helena Chmielewska-Szlajfer writes that while the attacker reportedly had a history of mental illness, the reaction to the murder has uncovered deep political divisions that now exist in Polish society.

Paweł Adamowicz, the Mayor of Gdańsk, was fatally stabbed on Sunday while standing on the stage in the centre of the city during the finale of the Grand Orchestra of Christmas Charity winter drive, Poland’s largest and until now most joyous charity event. Although immediately hospitalised, he died on Monday.

The attacker, with a criminal record, recently released after having spent more than five years in prison, may be mentally ill. His mother had warned the police in November that he was worried by his behaviour and that he might pose a threat. On Sunday, after wounding Adamowicz, he shouted that he had been held behind bars despite being innocent and that he had been “tortured” by the Civic Platform, Poland’s main opposition party. Adamowicz used to be a member.

Adamowicz, a well-liked mayor of one of Poland’s major cities, and the birthplace of the Solidarity movement, had been recently re-elected for the fifth time. Although once conservative, he became known for his support for gay and minority rights. In the current Polish political climate, this is an act of bravery.

According to his mother, the attacker intended to grab attention. The Grand Orchestra of Christmas Charity, now in its 27th year, is one of the very few events that still manages to bring Poles together. According to a recent IQS survey, it is also the most trusted institution in the country, favoured by 83% of Poles.

The Grand Orchestra was created in 1993 by Jerzy Owsiak, a radio and television host, known for his absurd sense of humour, “do watcha wanna” slogan, and a colourful, hippie vibe. The shows he created were a breath of fresh air and optimism in the still grey, yet newly democratic post-1989 Poland. The idea for the charity came from doctors who told Owsiak about lacking medical equipment for new-borns in hospitals.

He decided to use the television show as a platform to host live auctions, while volunteers on the streets collected donations. Any amount was enough to get a red heart-shaped sticker with the drive’s logo. The drive proved a tremendous success, so Owsiak repeated it the following year, and the next, until it became an institution, an awaited event held in towns and cities, and transmitted live on television on the second Sunday of every January. Since 1993, people have donated over £206 million to the Grand Orchestra.

Owsiak has been popular particularly among teenagers, who appreciate his rock & roll style, as well as the fact that two years after launching the Grand Orchestra he created Woodstock Station (now Pol’and’Rock Festival), a free summer festival, and a thank you for the volunteers who take part in the winter drive.

Popularity brings hate, which both Owsiak and Adamowicz learned to know well. For years, Owsiak has been attacked by the Polish Catholic Church hierarchs (with a few exceptions). They consider him the main competitor to people’s souls (and wallets) as he offers a secular, playful alternative for being kind. Others have repeatedly accused him of stealing money, despite several court cases that have proved otherwise. Still others, most notably members and sympathisers of the ruling Law, and Justice party and also the state-owned, currently openly party-ruled media, vilify him, trying to undermine his popularity. While the Grand Orchestra has been breaking donation records every year, notably so since the victory of Law and Justice in 2015, Owsiak recently lost his cool a number of times, to the delight of his aggressors.

Adamowicz, apart from being subject to typical attacks by his political opponents and – what since 2015 became the norm – smear campaigns produced by state-owned television, was also “declared politically dead” in 2017 on posters posing as death certificates distributed by the far-right organisation All-Polish Youth. After Adamowicz was stabbed, for a split-second government officials acted like one would normally expect. President Duda tweeted “thoughts and prayers” (albeit mentioning political differences between himself and the mayor), so did Prime minister Morawiecki and several ministers. 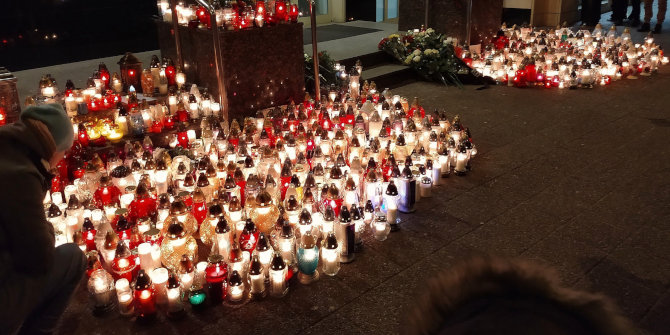 Then online media went back to the new “normal”, which since 2015 has meant aggressive attack mode: often violent Twitter comments posted and shared by officials and anonymous users alike, and reductionist, black-and-white accusations of who was responsible for the attack (either Law and Justice or Civic Platform), including why the victim deserved it. Little nuance has been allowed in Poland since Law and Justice’s 2015 victory, as the public sphere – major media from both sides of the political spectrum – has become dominated by two enemy camps: pro- and anti-government. Anything in between is treated as treason, or ignorance at best.

While Adamowicz was hospitalised and Owsiak was dealing with what was supposed to be the climax of a happy event, but which had turned into a national tragedy, one could notice how the hijacking into the black-and-with narrative was evolving live on Twitter. The attacker was quickly labelled either a brave fighter against the evil Civic Platform or a brainwashed follower of government propaganda, while the Grand Orchestra was boiled down to a symbol of anti-government community, or a herd of indoctrinated morons. Neither is true: the perpetrator has been acting in a manner that suggests he may be mentally ill, and the charity is supported by Poles across the political spectrum. Yet in the current climate subtleties are unnecessary distractions, instead there is the political battle of the two fighting sides.

Adamowicz died on Monday in the early afternoon. That same day Owsiak announced he would step down as the head of the Grand Orchestra. In the evening, people held silent demonstrations on the streets in Gdańsk and other cities. In Warsaw, they walked towards Zachęta Gallery, a symbolic place where in 1922 the country’s first president, Gabriel Narutowicz was murdered by a nationalist extremist.

In 2019, few believe the tragedy that took place on Sunday will reduce the level of violence in public debate. Yet I believe there is still hope: 2019 is an election year, in which Poles will choose members of the national and European parliaments. At a time when hate speech is the new normal, something as simple (one would think) as acts of civility in conversation will already provide much-needed change. And, it is important to remember that the 27-year-old Grand Orchestra of Christmas Charity itself proves that despite the present toxic political atmosphere people still can and want to grow as a kind-hearted community, with more caring citizens and better human beings. This year the drive is headed to break yet another record of donations, and thousands of people are sending Owsiak public messages asking him to stay on board.

Note: An earlier version of this article appears at PublicSeminar.org. The article gives the views of the author, not the position of EUROPP – European Politics and Policy or the London School of Economics.

Helena Chmielewska-Szlajfer – Koźmiński University / LSE
Helena Chmielewska-Szlajfer is an Assistant Professor in the Department of Management in Digital Societies at Koźmiński University, and a Visiting Fellow in the Department of Media and Communications at the London School of Economics and Political Science. She is the author of Reshaping Poland’s Community after Communism: Ordinary Celebrations (Palgrave 2018). 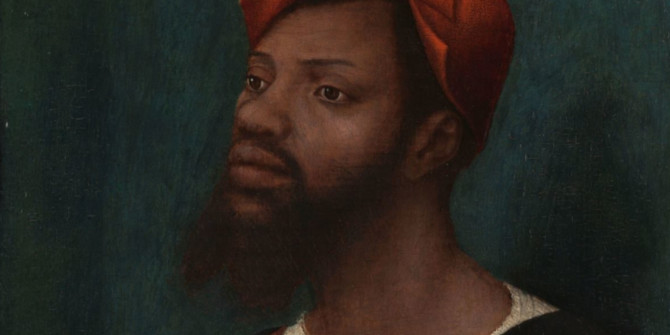 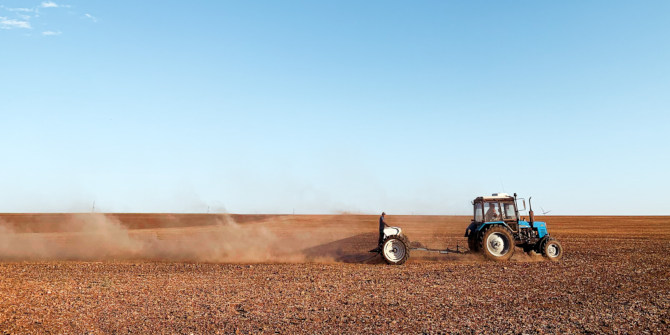