This spring is a busy and important period for Finnish political parties. Elections to the Eduskunta, the unicameral national legislature, are scheduled for 14 April, with the European Parliament elections following in late May. Unfortunately, this also means that the European elections will definitely be ‘second-order elections’, with the political parties and the media investing their resources in the Eduskunta elections and in the government formation talks that will follow them.

Government formation normally takes around 1-2 months in Finland, meaning that the new cabinet could be entering office around the date of the European Parliament elections. The negotiations over the cabinet programme and portfolio allocation are typically quite intense, with the media keeping a close eye on the bargaining. Because of the importance of the programme in structuring the work of the incoming cabinet, the parties involved in the talks must take them very seriously. Hence party leaders of the new coalition are strongly preoccupied with the negotiations.

Twenty years ago, Finland was in a roughly similar situation: Eduskunta elections were held in April 1999, with EP elections following two months later. The parties’ main focus was on the national elections, with party leaders leaving campaigning in European elections to individual candidates. Turnout was 31.4%, the lowest recorded in Finnish EP elections so far. Here, parties also have a strategic incentive. Many of them are internally divided over the EU, and hence parties try to field candidates with diverse views over European integration.

Finnish voters choose between individual candidates from non-ordered party lists, and thus stronger intra-party rivalry should facilitate electoral success. The whole country operates as a single constituency, with 14 MEPs to be elected in the May elections. Apart from trying to recruit candidates that are ideologically representative of their supporters, parties are also desperate to find candidates that could have genuine nation-wide name recognition. And so far, it is not looking particularly good. The candidate lists must be finalised by late April, and thus essentially all parties will probably wait first for the Eduskunta election results before announcing their last candidates.

In terms of campaigning, most of the individual candidates have already started on the campaign trail, travelling across the country and gradually advertising in the media. Yet it is guaranteed that the political parties will not engage in specific EP election campaigning before the Eduskunta elections are over. So far, no particular ‘European’ topic has attained media attention, as all eyes are on the national elections.

If the ‘second-order model’ theory holds, then the results of the European elections should essentially follow the vote distribution in the preceding Eduskunta elections. The Finnish party system is very fragmented, with the largest party normally getting at most 20-25% of the votes. The latest poll, conducted by the leading daily newspaper Helsingin Sanomat from 14 January to 14 February, puts the Social Democrats (SDP) in first place with 20.8% of the vote. If the SDP holds onto this lead then it would be the first time since 1999 that the Social Democrats would be the biggest party in parliament – and hence also the first time that Finland would have a centre-left prime minister since 2003.

Table: Opinion polling ahead of the 2019 Finnish parliamentary election 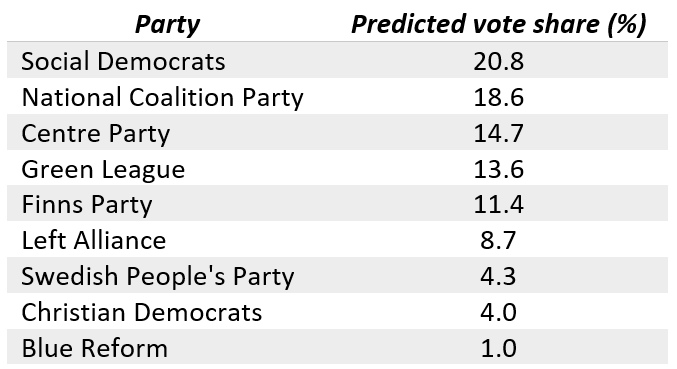 Social Democrats have heavily criticised a contested project to reorganise social and health services, not least on account of the reform providing a bigger role for the private sector in delivering such services. However, for the most part, SDP and the other opposition leaders have basically been content to sit back and let the government make its own mistakes. One of the two MEPs of the party, Miapetra Kumpula-Natri, is seeking re-election while previous party leader and an influential figure inside the party, Eero Heinäluoma, is the other main candidate. In any case, it is probable that the Social Democrats will gain at least one seat in the European Parliament.

The governing coalition has indeed had its hands full with the reorganisation of social and health services – its main project. It is essentially a deal between the Centre Party and the National Coalition, with the former getting directly-elected regional councils (the Centre wins most of its votes in the rural areas of the country) and the latter in turn ensuring a larger role for the private sector in delivering social and health services. However, the process with all its twists and turns has dragged on, and it is becoming increasingly clear that all the required legislation cannot be passed before the April elections.

In fact, the whole package may fail, especially as there is stronger criticism from within the governing parties, with several of their MPs already indicating that they will vote against the laws in the Eduskunta. Recently there has also emerged a wave of scandals concerning nursing homes and other facilities operated by private companies: public authorities have reprimanded these companies for inadequate staffing and overall poor treatment of the occupants, and the timing could not have been worse for the cabinet.

The Centre Party is thus in serious trouble, with the Helsingin Sanomat poll predicting 14.7% of the vote. This would be major loss for the party and in line with the setback experienced in the 2011 elections. Back then the Centre had held the position of Prime Minister for eight years, and like then, the burden of governing now seems to be taking its toll. The market-friendly policies of Prime Minister Juha Sipilä have clearly also alienated parts of the party’s electorate, many of whom lean more towards cooperation with the Social Democrats. Two of the three Centre MEPs (Elsi Katainen and Mirja Vehkaperä) are seeking re-election, with Mauri Pekkarinen, a central party figure with long experience from serving in the government, the other most notable candidate appointed so far.

The National Coalition came second in the poll with 18.6% of the vote. Luckily for the party, its three MEPs – Sirpa Pietikäinen, Petri Sarvamaa, and Henna Virkkunen – are all in the race. The National Coalition has normally performed well in EP elections, and most likely the party will at least hold on to its current seat share. The third cabinet party is the Blue Reform, formed after a split inside the Finns Party in the summer of 2017. The party has found it difficult to establish an identity somewhere between the hard-line anti-immigration views of the Finns and the mainstream centre-right parties, and according to the Helsingin Sanomat poll its support was only 1%. The party is yet to appoint any candidates for the EP elections.

Support for the Finns Party has been on the rise, with the recent poll giving it 11.4% of the vote. Party chair Jussi Halla-aho, himself an MEP, is surely trying to make immigration the main topic in both the Eduskunta and the European Parliament elections. Here the party may benefit from recent multiple abuse cases involving immigrants, with the victims including under-age girls. Halla-aho is seeking a return to the Eduskunta in the April elections, and whether the party can gain seats (it currently has two) in the EP will depend largely on its final pool of candidates.

Of the other opposition parties, the Green League appointed Pekka Haavisto, a senior party figure with long experience from both national politics and international organisations, as its interim leader in November when Touko Aalto was forced to resign as party chair due to health issues. Haavisto intends to step down in June when the Greens have their next party congress. Under Haavisto, the Greens have improved their ratings, with the Helsingin Sanomat poll indicating 13.6% of the vote. Greens have also normally performed well in EP elections, and they have a realistic chance of winning two seats, not least because previous party chair Ville Niinistö is among the candidates. Their sole MEP, Heidi Hautala, is seeking another term.

The Left Alliance currently has one MEP, Mirja Kyllönen, who is again on the party list. In the Helsingin Sanomat poll the party’s support was at 8.7%. Also, the Swedish People’s Party has one seat and Nils Torvalds is seeking re-election. While the recent poll gave the party only 4.3% of the vote, the Swedish People’s Party has benefitted from the low turnout and it is again perfectly possible that the party manages to get a single seat. The Christian Democrats have had an MEP in 1999-2003 and in 2009-2014, but the party will most likely again fail to win a seat. According to the Helsingin Sanomat poll the party received 4% of the vote.

Note: This article gives the views of the author, not the position of EUROPP – European Politics and Policy or the London School of Economics. Featured image credit: Timo Gufler (CC BY-NC-ND 2.0)

Tapio Raunio – Tampere University
Tapio Raunio is a Professor of Political Science at Tampere University. His research interests include the role of national legislatures and parties in European integration and foreign policy, the European Parliament and Europarties, semi-presidentialism and the Finnish political system. 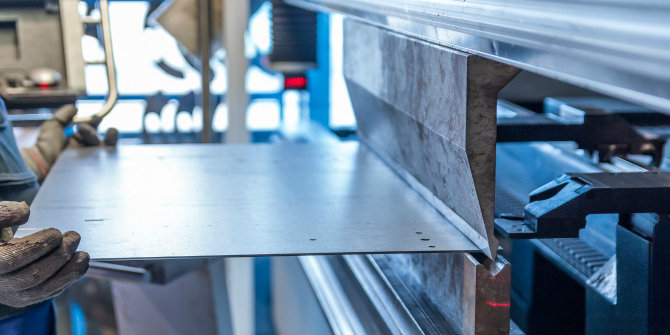