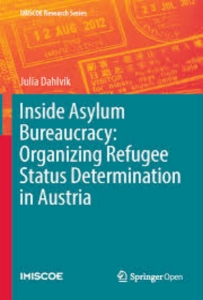 Asylum and immigration are two of the biggest topics in the European Union, with migration playing a decisive role in recent political elections throughout Western and Central Europe. While scholars of voluntary and forced migration have for some time been researching and analysing EU policies, the receipt of asylum seekers and immigrants and the ‘externalisation’ of European borders, surprisingly little attention has been paid to the specific ways in which bureaucrats and other decision-makers adjudicate asylum cases and the extent to which their decision-making aligns with top-down policies and regulations. Sociologist Julia Dahlvik fills this exact void in her book Inside Asylum Bureaucracy: Organizing Refugee Status Determination in Austria – available to download here – based on her doctoral research, which won both the Dissertation Prize of the Austrian Sociological Association and the Dissertation Prize for Migration Research of the Austrian Academy of Science.

In Inside Asylum Bureaucracy, Dahlvik conducts an in-depth case study of Austria’s former Federal Asylum Office (FAO) in order to examine ‘the circumstances under which decision makers work at the Asylum Office and how those circumstances can be explained’; analyse how decision-makers deal with the structural dilemmas they encounter; and, finally, discuss some of the possible consequences of decision-makers’ social practices (4). Combining the theoretical frameworks of organisational sociology – which emphasise structural, institutional, organisational and legal elements – and broader social theories that emphasise agency (5), she finds that decision-makers ‘develop individual strategies and approaches, highlighting the role of the subjective dimension’; construct facts, artefacts and incredibility; make extensive use of categorisation; and ‘show different practices in dissociating and delegating responsibility’ (7).

Dahlvik argues that the four key dilemmas that decision-makers at FAO face produce a system that is inconsistent and unequal in its treatment of asylum seekers. These dilemmas are regulation versus room for manoeuvre, emphasising officials’ balancing of legal rules with their own interpretations (120-22); definitiveness versus uncertainty, whereby the combination of information from a variety of sources, such as experts, doctors and country specialists, still leaves an inherent ‘lack of evidence’ in the procedure (134); the human individual versus the faceless case, which refers to the challenge of considering asylum claimants as individuals while enforcing certain standards evenly (153-56); and responsibility versus dissociation, highlighting the emotional and moral aspects of the job (173-74). As a result, Dahlvik concludes that there needs to be ‘a stronger focus on procedural justice and decision-makers’ ethical competence’ (7).

One of the major insights that Inside Asylum Bureaucracy offers is the notion that government asylum bureaus and their staff are confronted with similar challenges as any other organisation. The FAO operates similarly to a corporation in that it has managers who supervise caseworkers who process asylum claims (63). Caseworkers, as a result, are under constant time pressure to complete as many cases as possible while finding ways to improve the quality of their decisions (65, 68).

Secondly, there is the issue of communication, as caseworkers rely on interpreters when they interview claimants. Through Dahlvik’s discussion of ‘good’ and ‘bad’ interpreters (104-10), it becomes quite clear that the introduction of interpreters into the procedure can lead to certain biases, particularly because many of the interpreters originally came to Austria as refugees from the same countries of origin as the asylum claimants (101). Thirdly, Dahlvik describes a tension between formal and informal norms:

By reaffirming the daily grind of the bureaucratic apparatus, officials risk losing sight of the procedure’s original purpose, namely, to grant protection to individuals on the basis of their experiences (60).

Finally, Dalhvik’s findings that claimants’ ‘performance’ throughout the asylum procedure matters (93), and that claimants with knowledge of their rights can have an advantage over those who are less informed (95-99), expose important imbalances in the procedure and provide concrete examples of the ways in which it can work to disadvantage certain individuals. Scholars have cautioned that the international refugee regime’s determinations of who qualifies for refugee status is highly problematic, with James C. Hathaway, for instance, examining whether individuals experiencing large-scale famines should also qualify for refugee status even though the United Nations’ 1951 definition of refugees focuses strictly on persecution. Yet, Dahlvik shows the roles that personal ideology, language, networks and legal knowledge can play in allowing some individuals to better stake their claim to asylum than others in a system that is supposed to give an equal chance to all.

One limitation of the book, however, is that it insufficiently references and explores connections to other relevant literature. Dahlvik’s previously mentioned discussion of formal versus informal norms and the normalisation of problematic bureaucratic tendencies, for example, would significantly benefit from incorporating Michael Barnett and Martha Finnemore’s research on ‘The Politics, Power, and Pathologies of International Organisations’ (1999), which examines how the rational-legal authority of international organisations makes them not only powerful but also ‘unresponsive to their environments, obsessed with their own rules at the expense of primary missions, and ultimately lead[s] to inefficient self-defeating behaviour’ (699-700). Even though the FAO is not an international organisation, Barnett and Finnemore’s research applies because caseworkers are so split between different organisational goals that ensuring the protection of asylum-seekers – the ‘primary mission’ – cannot always be placed on top.

Additionally, in a discussion of what Dahlvik refers to as an ‘atypical interview’, she describes how a caseworker told a claimant that economic reasons of flight ‘are not a reason [for protection] under asylum procedure’ (87). This point could be linked to broader on-going debates as to how the term ‘refugee’ should be defined, with some defending the narrow definition that focuses solely on persecution, and others advocating for a broader definition that encompasses environmental disasters and economic factors as valid reasons for flight (see Price 2006; Simone 2016; and Haddad 2004).

Thirdly, one of the most significant findings that Dahlvik could emphasise more is the fact that claimants with knowledge of their rights can have an advantage over claimants who do not. This finding would have benefited from a more extensive discussion of other recent works that highlight inequality and power imbalances among refugees, including Simon Turner’s study ‘Negotiating Authority between UNHCR and the People’ (2006), which shows how individuals with certain skills can assume positions of power even in refugee camps, and R. Charli Carpenter’s work ‘Women and Children First: Gender, Norms, and Humanitarian Evacuation in the Balkans 1991-1995’ (2003), which analyses how aid workers decided which parts of the population should receive protection first in the former Yugoslavia. These studies bolster the idea that there are certain ways in which asylum seekers can leverage the connections and knowledge they have in order to better their position, and emphasise bottom-up processes that can seep into the asylum procedure, thereby complimenting Dahlvik’s research.

In conclusion, Inside Asylum Bureaucracy offers a perspective on asylum that has hitherto been scarcely explored: namely, how do those who determine the outcome of asylum cases reach their conclusions? Dahlvik’s findings suggest that caseworkers at the FAO face similar challenges as bureaucrats in other settings, and that asylum seekers’ performance in the procedure matters. These conclusions are insightful and can lead to tangible policy changes that policymakers and refugee activists can lobby to implement, such as reducing caseworkers’ time pressure, emphasising the quality of asylum decisions, enforcing strict interpretation training and rules and informing all asylum claimants of their rights at the onset of the procedure.

Victoria de Keizer
Victoria de Keizer is a recent political science graduate from McGill University (MA) and New York University Abu Dhabi (BA) from the Netherlands and Ethiopia. She currently works at a SaaS company in Montreal and continues to be actively engaged in migration-related research.