The last European Parliament elections in 2014 took place during a period of significant tension over the Greek debt crisis. As Zoe Alipranti explains, this time around, the European Parliament elections in Greece are unlikely to feature such a high level of polarisation over Europe. Syriza has drifted away from its radical Euroscepticism, and although substantial dissatisfaction persists among many Greek citizens, a majority are likely to back a continuation of the country’s current course on Europe.

Despite being integral to understanding the European political landscape in a significant number of European countries such as France, Germany, Spain and the Netherlands, fragmentation is not a trend evident in Greek politics. Two mainstream parties are predicted to get 16 out of 21 seats. Greeks’ negative perceptions of the EU remain strong, but are weakening and these elections will not give a mandate for extensive change at the European level as they previously did.

The importance of bipartisanship in Greece

Syriza leader Alexis Tsipras proved effective in mobilising simmering frustration and tapping into public grievances against austerity; his party, which belongs to the European United Left Group (GUE/NGL), garnered 27% of the vote and six seats. This laid the groundwork for his eventual victory in the January 2015 national elections. After the European elections, Tsipras said the outcome of the vote robbed the government of any “political or moral legitimacy to continue with austerity policies.” 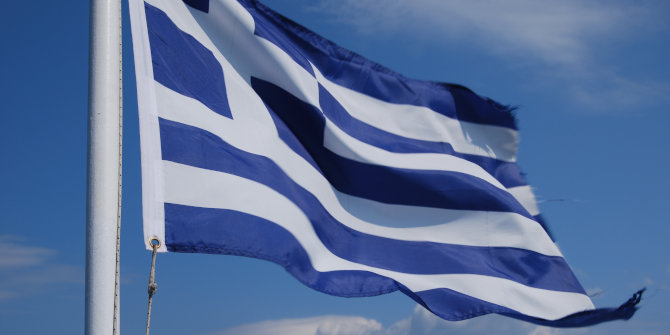 Fast forwarding to 2019, Greece is now confronted with a highly different political landscape. The centre-right party New Democracy, which belongs to the European People’s Party (EPP) is forecasted to double its seats from five to ten in the European Parliament and win close to 37% of the vote. This will confirm the trend of the incumbent government being punished in European elections. Indeed, New Democracy is investing heavily in the European elections for domestic reasons. Syriza is trailing behind in the polls, but is predicted to keep its six seats.

Syriza was recently thrust into the European public spotlight because of the Prespes Agreement, solving a three-decades-long dispute over the name of what is now ‘North Macedonia’. This gave rise to a flurry of articles across the European press, hailing the transformation of Syriza into a mainstream party. Syriza has dropped its radical European agenda and rhetoric on Europe is discernibly closer to that of a social democratic party.

However, domestically, it remains far from the social democratic path. Minister of Labour, Effi Achtsioglou recently said “we do not want to become social democrats, we will remain a party of the radical left.” Despite internal contradictions in Syriza, its European profile means that a majority of Greeks this time will be voting for parties that are openly in favour of Greek membership of the European Union and do not seek to embark on a radically disruptive path.

The four remaining seats are likely to be divided between the centre-left KINAL and far right Golden Dawn. This will mark a reversal of the trend of fragmentation that was pronounced in 2014, with the centrist party Potami and conservative Independent Greeks forecasted to lose their seats this time. Bipartisanship will thus be solidified in these elections.

KINAL is a party born from PASOK that ushered in many Greek reforms in the 1980s. It was replaced by Syriza during the economic crisis and is still struggling to make inroads since it has been squeezed like many other social democratic parties who struggle to articulate a successful electoral strategy in a changing political environment that is not solely defined by the right and left divide. Results in European elections reflect their domestic electoral woes.

Meanwhile Golden Dawn is predicted to lose one of its three seats in the European Parliament. Its electoral success is mainly understood as the economic crisis proving fertile ground for the party to inflame nationalist sentiment. The Communist Party will also gain one seat: support for it has been stable since the Greek transition to democracy. Thus, Greece is likely to have three MEPs representing two extremes of the political spectrum that are fundamentally opposed to the EU.

After teetering on the brink of exiting the Eurozone in 2015, the financial bailout of Greece officially ended in August last year. However, it must still implement policy commitments, such as reducing public sector jobs and liberalising labour markets, and it will remain under close surveillance from the IMF and the EU.

Attitudes towards the EU indicate increasing EU appreciation, but are largely negative compared to the European average. According to a recent poll, only 52% of Greeks identify as European citizens, placing them penultimate in a list of all member states with Bulgaria being the only country below Greece – the European average is 71%. When gauging change, it is important to note a decrease in Greeks’ negative image of the EU compared to recent years from 43% to 35%. Yet, Greece is the European country with the lowest percentage of citizens holding a positive image of the EU at only 25%.

In terms of issues they are most concerned with, Greeks, as with many other Southern and Eastern European countries, are more concerned about emigration than immigration. A majority of the public favours restricting the number of people who can leave the country for sustained periods of time. Greece is also among the nations with the lowest percentage of citizens being comfortable with having social relations with immigrants – only one in two people believes the integration of immigrants has been successful.

Waning hostility toward the EU, but high levels of dissatisfaction remain

Two broad trends across Europe will have little expression in the Greek elections. First, bipartisanship remains strong, making Greece an outlier in the broader array of European nations that are grappling with intense fragmentation. Secondly, the rise of Eurosceptic parties and new liberal parties is also not a trend present in Greek politics. Liberal alternatives similar to the Green Party in Germany or La République En Marche in France are non-existent in Greece, with these voters coalescing around New Democracy or KINAL.

Greece is no longer reeling from divisions over Europe, but swathes of the population hit by austerity are still largely dissatisfied with many angles of the European project. However, Syriza has shunned its radical Euroscepticism and steered toward a more centrist course in terms of its European campaign. The waning hostility towards the EU should be noted and a majority of Greek voters will be voting for a largely status quo path on Europe, even though high levels of overall dissatisfaction persist compared to the overwhelming majority of other European countries.