Twitter has become a major political campaigning tool, but what determines the style of tweets used by politicians to build support? Margherita de Candia and Claudio Bellei present evidence from a study of the strategies used by four Italian politicians: Matteo Renzi, Silvio Berlusconi, Matteo Salvini, and Luigi Di Maio. They explain that although certain politicians, such as Berlusconi, appear to be more likely to attempt to elicit ‘fear’ rather than ‘joy’ with their tweets, the emotions politicians evoke depend to a large extent on the electoral cycle and their status in power or opposition.

In an era where a wrongly phrased social media post may determine the crossing of the fine line between fame and infamy, and where popularity is positively related to the number of ‘Likes’ and ‘Retweets’, it is no wonder that politicians spend loads of money on their online communication. In such an era, sympathy with voters may reward more than expertise; ephemeral emotional proximity may pay off more than thought-out policy-making.

Recent events point to the prominent role of ‘guts’ and ‘hearts’ in contemporary politics. Think of the electoral campaign for the UK referendum on EU membership, which demonstrated how voters’ emotions – and the ability of political agents to play with them – may help determine victory and defeat.

The question then is: if feelings (of hatred, joy, etc.) matter in the political realm, do politicians differ in the emotions voiced on their online profiles? To answer this question, we considered the online communications of four prominent Italian politicians. Two of them, Silvio Berlusconi and Matteo Renzi, until not so long ago used to hold the country’s reins. The former – whose CV features almost ten years (on and off) as Prime Minister – is the founder of Forza Italia, which was Italy’s main centre-right party from the 1990s until very recently. The latter was elected leader of the main centre-left party – the Partito Democratico (PD) – in 2013, and served as Prime Minister from 2014 to 2016. Notwithstanding their over the top styles (one reason why some observers have labelled them as populist), both Berlusconi and Renzi may be considered mainstream politicians.

The other two party leaders considered in this analysis are Matteo Salvini and Luigi Di Maio, who joined government forces in June 2018. Since December 2013 when he became the party’s leader, Salvini has thoroughly rebranded the Lega (formerly known as Lega Nord), transforming it from a secessionist party supported by a geographically circumscribed electoral constituency, to a nationalist party popular throughout the country. Di Maio is the leader of the Movimento 5 Stelle (M5S), the other successful story of the last decade in Italian politics. Both Salvini and Di Maio pride themselves on being anti-establishment, non-mainstream politicians, and have started to welcome the epithet of populists. Do these differences reflect a different use of Twitter by the four leaders?

Fear, joy, and the electoral cycle

We address the above question through an emotion analysis of tweets using machine learning techniques. The analysis unfolded in three phases. First, we retrieved the tweets through the Twitter API and the Python library python-twitter (retweets are not considered in the analysis). Second, we translated the tweets from Italian into English using the Google Cloud API and the Python library google-cloud-translate (we have found the translation to be rather accurate even for complicated sentences). Third, given all the translated tweets, we performed an emotion recognition analysis. This shows that there are two main emotions communicated via the tweets: fear and joy. This study thus focuses solely on these two sentiments.

Figure 1 displays the aggregate percentage of tweets posted between February 2018 and February 2019. The difference is not particularly pronounced. Overall, the four leaders communicate joy and fear to a similar extent. Yet one aspect is worth stressing: Berlusconi is the politician who more frequently expresses fear with his tweets. Starting off as a singer in nightclubs and cruise ships, Berlusconi has traditionally been renowned for his smile and jokes. Not long ago, at the peak of the Eurozone crisis, he minimised the gravity of economic hardship by pointing at the country’s restaurants being packed. It is thus interesting to see how this master of optimism is now conspicuously voicing fear on his Twitter profile.

More insight comes from disaggregating the total number of tweets to capture variation over time. We focus on Renzi and Di Maio only, as the tweets that are available for them span more than three years, compared to only one year for Salvini and Berlusconi. Figure 2 portrays a time series of the percentage of Renzi’s and Di Maio’s tweets expressing joy; Figure 3 does the same for fear. Each data point represents results aggregated on a weekly basis, to which a 13-week symmetrical weighted moving average is applied.

The horizontal bars at the bottom of the graphs represent each period in which Renzi, Paolo Gentiloni (PD), and Giuseppe Conte were in charge (the latter is the PM of the M5S-League coalition government). Clearly, there is considerable intrapersonal and interpersonal variability. The two lines roughly mirror each other, suggesting that the two leaders react differently to the same contextual circumstances in Italian politics.

During his premiership, Renzi posted a considerably higher percentage of positively framed tweets than his challenger. This trend starts to reverse after the political handover to his party colleague, Gentiloni, following Renzi’s defeat on the 2016 constitutional referendum. Concurrently, there is a steep increase in the fraction of Di Maio’s tweets conveying a sentiment of joy. This undergoes a temporary setback during the campaign period for the 2018 general elections – in a specular fashion with Renzi’s online communication – to then rear up again.

Figure 2: Time series of the percentage of tweets conveying a sentiment of joy that have been published by Luigi Di Maio and Matteo Renzi over the course of three years 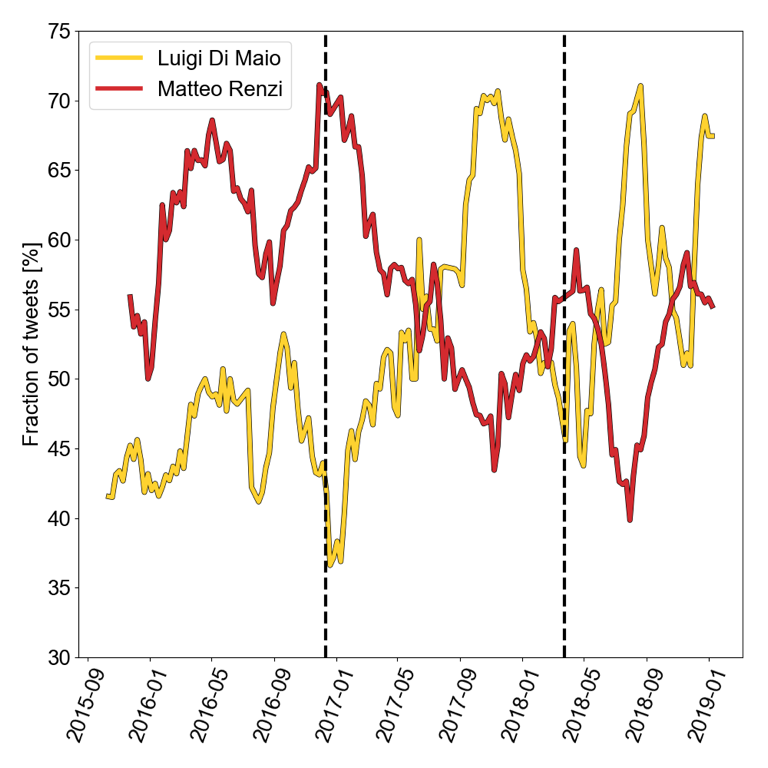 Figure 3: Time series of the percentage of tweets conveying a sentiment of fear published by Luigi Di Maio and Matteo Renzi over the course of three years 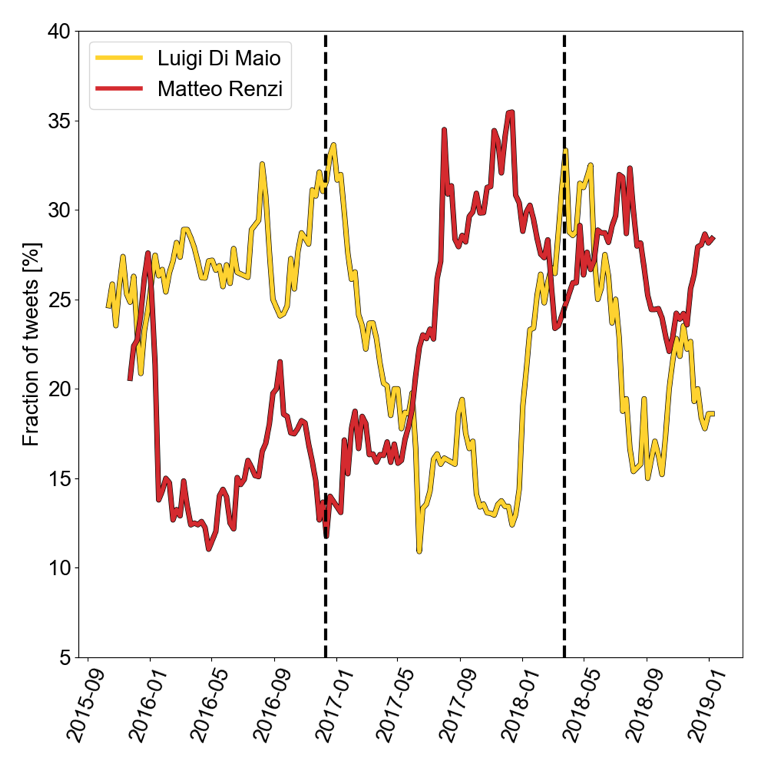 Whilst our data do not allow us to demonstrate any possible causality for these changes, the gathered evidence hints at the existence of a relationship between the position party leaders occupy in the party system – whether they are in government or in opposition – and the type of emotions voiced via their tweets. Notably the tweeting of positively framed tweets seems associated with government office; conversely, fear is most often voiced when in opposition. Furthermore, there is evidence that the two party leaders adopted a different communication style during the 2018 elections. As shown in Figure 3, the percentage of Di Maio’s fear-tweets increased around that period, contrary to that of his opponent. This resonates with recent scholarly findings pointing to the prevalence of fear messages in the electoral campaigns of so-called populists.

Hence, while limited in scope, this analysis adds to our understanding of the role of emotions in the internet era by showing that the emotions politicians convey online – populists included – are not fixed in time. As Figures 2 and 3 demonstrate, once elected, even populists abandon their fear-language in favour of a more positively framed online communication; a turnaround well grasped by Di Maio’s recent and much discussed comment, “We invest on the happiness of Italians!”.

Still, while conveying similar emotions when in government or opposition, the two leaders have approached critical junctures – such as power turnover and elections – differently. This is possibly linked to the diverse nature and electorate of the two parties – a speculation worth exploring further. Moreover, considering the different political fate of Renzi and Di Maio, our analysis drops clues as to the existence of an association between politicians’ online communication strategies and their popularity – another hypothesis worthy of deeper investigation.

Margherita de Candia – University of Reading
Margherita de Candia is a Teaching Fellow in Politics and IR at the University of Reading. She completed a PhD in European Studies at King’s College London in August 2018, focusing on multilevel party politics in the European Union. Her latest publication, co-authored with Edoardo Bressanelli, is available in the Italian Political Science Review.

Claudio Bellei – Elliptic
Claudio Bellei holds a PhD in Plasma Physics from Imperial College London. He is currently a data scientist at Elliptic, where he works on detecting and preventing criminal activity in cryptocurrencies. Previously, he worked on nuclear fusion at the Lawrence Livermore National Laboratory in the United States and was a recipient of a Marie Curie International Incoming Fellowship. 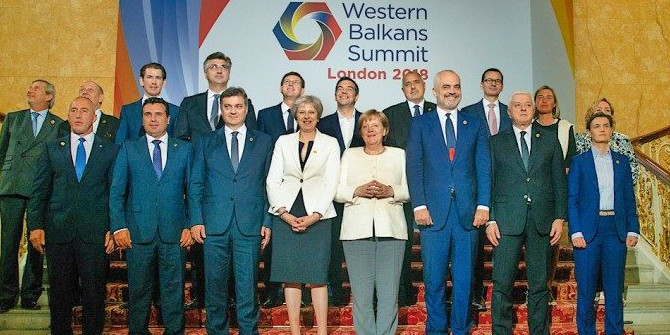 Five minutes with Sir Robert Cooper: “The Brussels Agreement between Serbia and Kosovo was based on conversation, not EU pressure”

Despite a difficult 2014 for the French economy, France is still far from being the ‘sick man of Europe’