The Spanish general election held on 28 April saw the Spanish Socialists, led by Pedro Sánchez, win the largest share of the vote. Yet as Javier Astudillo Ruiz explains, developments on the right of the political spectrum captured many of the headlines. He writes that the results offered a lesson for European centre-right parties of how not to fight an election, rather than a roadmap for social democratic parties eager to recover the support of voters.

On 28 April, Spain went to the polls for the third time in the last four years. The result of the elections generated international attention, mainly due to the emergence of the far-right party Vox and the recovery of the Spanish Socialists. Still, these elections can be considered just the first round. Key issues such as which party is going to lead the opposition to the Socialists, or which party will be their coalition partner, if any, are still undecided. They will be resolved after the second round, the European, regional and local elections on 26 May.

Nevertheless, the elections already reflected some important changes to a fluid Spanish political picture. First, the emergence for the first time since the early 80s of a far-right party, Vox (voice in Latin), seems to suggest the country is not immune to the nationalistic, anti-immigration, and Islamophobic movements on the rise across the rest of Europe. But without denying the importance of its emergence – mainly the attraction that some of its discourse and agenda may have for the Spanish centre-right parties – its rise should be qualified. Two and a half million Spaniards have not suddenly moved to the far right.

To start with, Vox has added almost no new voters to the right-wing side of the Spanish political spectrum. While in the elections, turnout increased by more than 2.2 million people, the sum of the Spanish right-wing parties only increased by around 100,000 new voters. By contrast, the PSOE itself obtained around 1.2 million (while recovering another 800,000 voters from the leftist coalition Unidas Podemos). The rest of the parties (mainly regionalist and regional-nationalist parties) also increased by around 900,000 votes.

In addition, and in contrast with the situation in some other European countries, working-class neighbourhoods in Spain do not seem to be a fertile ground for Vox. Focusing on its result in the city of Madrid, which represents around a fifth of the party’s total national share, we can see that Vox performs better in richer districts than in poor ones (see Figure 1). The percentage of foreigners is however a much worse predictor of its support (see Figure 2), though this unexpected relationship may just be an effect of the rent (the richest districts also have a lower foreign population). 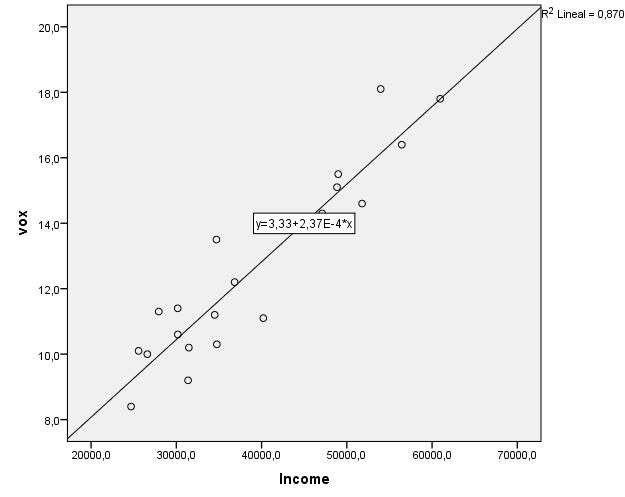 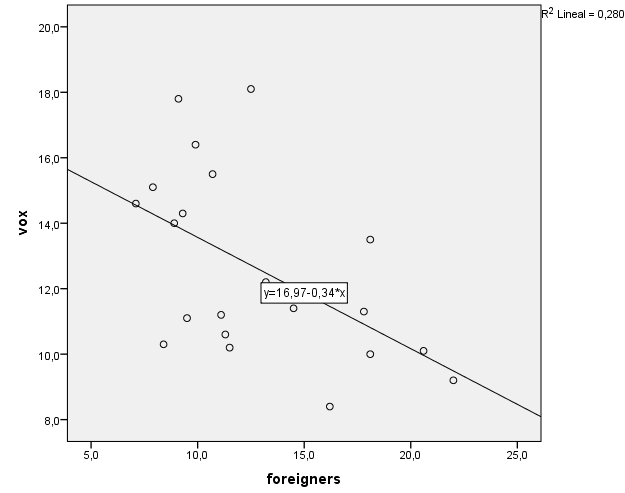 Vox success has come at the expense of Spain’s traditional right, the PP (Popular Party). Figure 3 shows the close relationship between the Vox vote share and the decline of the Conservatives in the districts of Madrid. 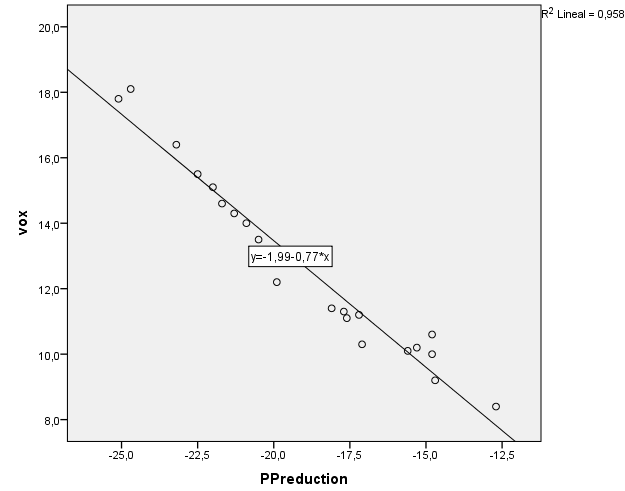 Most of the far-right supporters, that until now had voted for the PP because it was the only electorally-viable right-wing party, seem to have abandoned it to a large extent. The Spanish conservatives have lost around 2.5 million voters to Vox and another million to the centre-right party Ciudadanos. Its vote share dropped from 33% in June 2016 to 16.7% in this year’s elections.

No doubt the way the Spanish conservative government reacted to the corruption scandals, or the independence challenge in Catalonia, was an important factor for the emergence of Vox, as well as the growth of the centre-right Ciudadanos. But recent strategic mistakes made by the PP’s novice leader, Pablo Casado, have furthered its decline.

Perhaps the most important one was his acceptance of Vox support to oust the Socialist party from the regional government of Andalucía in December 2018, and, later during the electoral campaign, to repeat the operation and count on them to form a coalition government in Madrid. For those on the far-right who may have supported the PP, it became clear that backing Vox was not a wasted vote, but an instrument to have a right-wing coalition government closer to their ideological preferences. True, the fact that the leader of Ciudadanos never explicitly rejected this possibility made a possible coalition of the three parties even more credible.

In electoral campaigns it is vital to mobilise your supporters and not to galvanise the support of your main rivals. Casado’s willingness to govern with the support of Vox – and Ciudadanos’ silence about it – not only fostered the abandonment of his party by the far-right, but also encouraged support for the PSOE as many were afraid of a party with Francoist connotations. In fact, the elections saw one of the highest vote increases for the PSOE and the Catalan and Basque nationalists in recent decades.

It cannot be denied that some bold strategic moves by the PSOE leader, Pedro Sánchez, were also a key element in the electoral recovery of the Spanish socialists. First, his recapture of the leadership of the party after being ousted by its old guard made clear that the renovation of the Socialists was real. Second, his ability to mount a successful motion of no confidence starting with a parliamentary base of 84 out of 350 let him recover the national government for the Socialists.

Implementing or promising to implement some social and symbolic policies offered political capital for the Socialists to recover some of its progressive credentials, which were lost in the last years of the Zapatero government (2008-2011). This facilitated the coordination of voters afraid of a right-wing government with Vox included around the Socialist party, and not the leftist rival Unidas Podemos (which lost around a third of its seats).

The results of the Spanish elections therefore offered more of a lesson for European centre-right parties of what not to do, rather than a roadmap for social democrats to recover the support of voters.

Note: This article gives the views of the author, not the position of EUROPP – European Politics and Policy or the London School of Economics. Featured image credit: European People’s Party (CC BY 2.0) 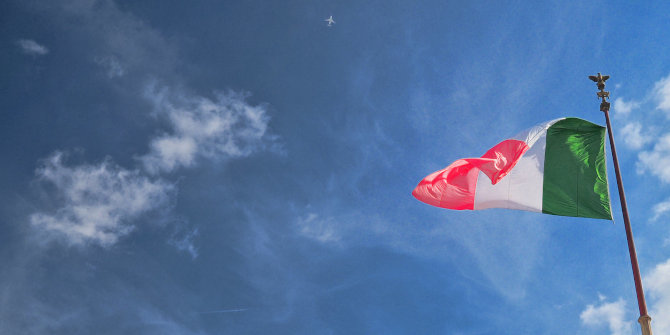