Brexit is not a major issue for people voting in the European Parliament elections in the rest of the EU. But Britain’s struggle to leave the EU may make staying in the bloc more attractive, says Sara Hagemann. Nonetheless, given the uncertainty surrounding the UK’s departure, Eurosceptic parties may be able to exploit hopes that a favourable exit deal is still possible.

When voters go to the ballot box in the EU27 countries on 23-26 May, Brexit will not be an issue that directly affects how they choose to cast their votes. The domestic political context and perceptions of the EU’s value to their respective countries will determine their political choices on the day. This will particularly be the case for issues such as how the economy is doing, whether immigration is a problem and whether the EU is seen as a solution or part of the problem when it comes to the challenges confronting their country.

But while Brexit is unlikely to be a key determinant of people’s vote choice we can still expect it to influence the outcome in two ways. First, the Brexit process has played a part in moderating public debates and led (most) governments and mainstream parties to take an explicitly pro-EU stance. Brexit has made it clear that leaving the Union comes with significant economic and political costs.

As a consequence, at a time where the EU collectively and its member states individually are faced with a whole battery of significant political and economic challenges, Brexit has moderated the position of political representatives in the remaining member states. The case for staying in the Union is compelling in the light of Brexit, particularly when Europeans face a number of pressing challenges, including looming global trade wars, climate change, security threats,
illiberal politics, energy policy disputes, Eurozone woes and migration pressures.

Image from the Spitzenkandidaten debate on 15 May at the European Parliament, Credit: CC BY 4.0: © European Union 2019 – Source: EP

We should bear in mind, however, that Brexit hasn’t actually happened yet, and the final outcome is far from clear even now. This may cause difficulties for mainstream parties, and representatives from governing parties in particular: Eurosceptic candidates and parties across Europe are still keeping a close eye on the Brexit process to see if there are any benefits from the negotiations which they may wish to follow. In particular, what will be the UK’s policy on migration from within and outside the EU, and which kind of arrangement – if any – will the UK have with the EU’s single market in the end? As the answers to these questions are not yet clear, Eurosceptic parties may have some traction with arguments that alternatives to EU membership are still possible, and unlikely to result in the immediate doomsday scenarios predicted by pro-EU representatives. Governments will worry about how these debates might influence domestic political opinion, particularly in countries where local elections are held at the same time (Ireland, Spain and Greece) or where regional or general elections are within sight (Poland, Finland, Portugal, Belgium, Denmark, Bulgaria, Latvia and Greece all have elections in 2019).

The second way that Brexit will affect the elections in EU27 is the way in which it will impact the European Parliament as a political and legislative institution going forward. The newly elected UK MEPs may only be taking up office temporarily, which means that coalition building between the party groups could end up taking place in the shadow of Brexit. This matters to the EU27 for the obvious reason that the European Parliament is an important body in the European political landscape: it is on equal footing with the EU governments in deciding most EU policies, and has a say on the EU budget and in the appointment of the EU Commission. But it will also matter as the overall power balance in the EU is changing: there have been important changes in government in a number of key member states in the last two years (including recently in Spain), and France and Germany sought to revive their leadership in Europe through announcements of common plans and visions for the EU (but questions remain for the policies to go with them).

The European Parliament has played an important role in policy making during this time and will continue to do so, but often finds itself marginalised when it comes to big political topics and crisis situations. In the EU27 there will be a worry that a more fragmented European Parliament, including a number of (temporary) British MEPs elected on pro- and anti-Brexit platforms, will find it more difficult to act as a co-legislator to the governments and enact its parliamentary role in the EU system.

The EU27 have a lot at stake in the European elections and will be concerned about the results and their impact on their own domestic politics and the overall power balance in the EU. It is in this context that Brexit plays a part in considerations of what comes next, and in particular what is ahead for the European Parliament during its next five-year term. But it is also clear to governments, parliaments and voters in the EU27 that Brexit is only one part of a changing European political landscape.

Note: This article is an extract from The European Elections and Brexit report by UK in a Changing Europe, and also appeared at E!Sharp and LSE Brexit. It gives the views of the author, not the position of EUROPP – European Politics and Policy or the London School of Economics. 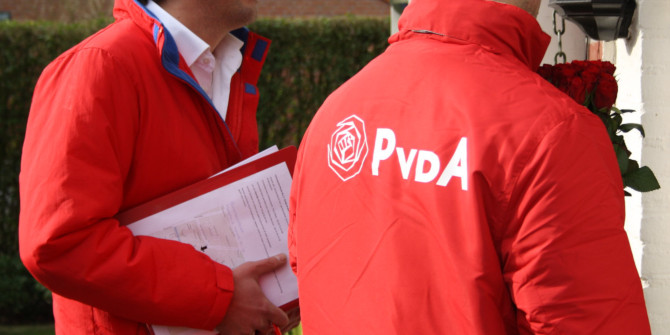 What happened to the Dutch left?