A crucial strategic choice in political lobbying is whether to go it alone or join forces with others. Drawing on new research from five European countries, Wiebke Marie Junk assesses whether and for whom this cooperation pays off. She shows that cooperation constitutes an alternative influence currency to leveraging individual resources and is especially to the benefit of less resourceful advocates.

Political advocates, such as non-governmental organisations (NGOs), trade unions, or corporate actors, are not lone wolves. On the contrary, they often work together in ‘packs’ to reach their goals and affect public policy. A number of studies on lobbying in the United States and Europe have shown that coalition formation is a common strategy used by groups trying to affect political decision-making. Yet, whether the actual benefits of cooperation exceed its costs has long remained an open question.

In a recent study, I look at the effects of active cooperation between political advocates on their perceived influence in affecting concrete policy outcomes, such as regulation of electricity prices, the retirement age or levels of development aid. I argue that when lobbying actors cooperate by sharing information with each other, coordinating strategies or implementing policy campaigns in cohesive coalitions, they build up information and support resources, which can boost their lobbying success similarly to spending economic resources on lobbying on the issue individually. Further, I reason that the benefits and costs of active cooperation are likely to be distributed unequally between partners, and depend on the individual resources the actor spends on the issue. Active cooperation should especially help weaker advocates by compensating for low economic resources, whereas I expect that resourceful actors bear higher costs but benefit less from resource pooling themselves.

I provide support for this theory by analysing lobbying on a diverse set of 50 policy issues in five European countries (Denmark, Germany, the Netherlands, Sweden and the United Kingdom). The results show that cooperation with other advocates increases lobbying success, but that this effect is strongest for actors who have lower levels of economic resources on the issue themselves.

Figure 1: Coefficent plot showing the effect of cooperation and resources on perceived influence 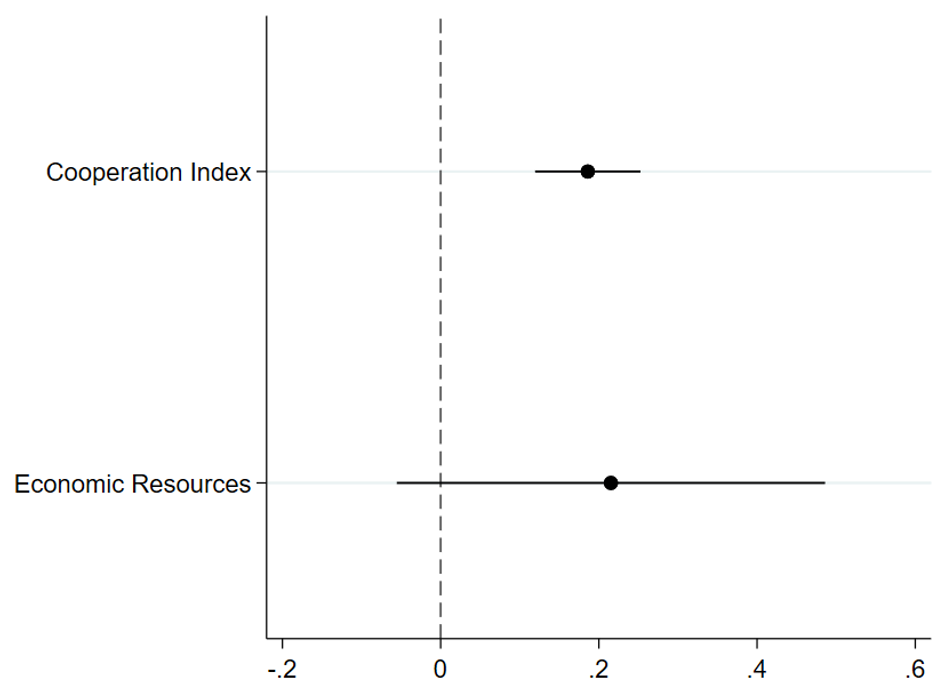 Note: Plot based on Model 2, with confidence intervals (CIs) at the 95 percent level. For more information, see the author’s accompanying journal article.

Note: Both panels with 95 CIs based on Model 4. Thin bars indicate the share of observations. For more information, see the author’s accompanying journal article.

These findings have both practical and normative implications. The resource exchanges that take place between cooperating advocates are relevant for both scholars and practitioners, because lobbying success, and by extension policy outcomes, seem to be measurably affected by such collaborative dynamics. For advocacy organisations, concerted lobbying can pay off, but its benefits depend on the resource endowments of the organisation (and its partners).

Normatively, the findings may ease the fears of elitist forces in lobbying, because they show that resource-poorer advocates have their unique way to increase their lobbying success, namely by joining forces. It seems that cooperation can effectively function as ‘a weapon of the weak’ allowing less advantaged interests to exert more influence on policy.

An open question remains, however, as to why a large share of relatively more resourceful groups decide to join coalitions, even though they benefit relatively less from this cooperation. Reasons for this strategy might revolve around reputational stakes, if powerful players can improve their public image by working with less advantaged organisations. Moreover, cooperating actors may, in fact, exchange resources on many issues in the political system at the same time, and benefits may equal out over time. Generally, such truly collaborative dynamics in lobbying are highly relevant for further enhancing our understanding of policy influence in the future.

Note: This article gives the views of the author, not the position of EUROPP – European Politics and Policy or the London School of Economics. Featured image credit: © European Union – European Parliament (CC BY-SA-ND-NC 3.0)

Wiebke Marie Junk – University of Copenhagen
Wiebke Marie Junk is a Postdoctoral Researcher at the University of Copenhagen (KU) and a member of the GovLis project on government responsiveness to public opinion and interest groups. Her research interests lie in the fields of public policy, European Union (EU) and global governance, and revolve especially around the involvement of non-state actors.