Christine Lagarde, the former Managing Director of the International Monetary Fund, is expected to take over from Mario Draghi as the next President of the European Central Bank. David Hollanders argues that although Lagarde has been viewed by some observers as a progressive choice, there is little reason to believe she will produce a meaningful shift in the ECB’s approach.

Mario Draghi has received a mildly positive press in neo-Keynesian circles. He arguably saved the euro with his ‘whatever it takes‘ speech and he pushed through Quantitative Easing. His successor, Christine Lagarde, might even be seen as progressive, or so at least Lagarde suggests herself by pledging she will ‘paint the ECB green’. The progressive mantel of Lagarde, however, does not stand up to scrutiny, just as Draghi is nowhere near Keynesian. On Draghi’s and Lagarde’s watch, the ECB and the IMF favoured private banks wherever, whenever and as much as they could. As such, the left should not expect anything from Lagarde. But first the track record of Draghi, the man Lagarde will replace.

Draghi was appointed in 2011. At that time, high yields on Greek, Italian, Portuguese and Spanish bonds called into question the existence of the euro. His speech at the Global Investment Conference on 26 July 2012 put an end to that. He stated that the ECB was “ready to do whatever it takes to preserve the euro.” This ‘whatever’ sounded bold, but it came down to the Outright Monetary Programme (OMT), in which the ECB would buy an unlimited amount of bonds on the secondary market if the country in question had requested support from the European Stability Mechanism (ESM).

The latter implied that the country had to sign a Memorandum of Understanding (MoU) with the Troika (ECB, IMF, European Commission). And what that meant, became clear in Greece. Greece had to decrease spending on pensions, wages, health-care and education. It had to hand over control of the tax department. And it had to privatise public assets, which meant selling them at fire sale prices to (foreign) investors. In return, the ESM loaned money to Greece that was earmarked to (i) repay private creditors and (ii) recapitalise Greek banks. To avoid the risk of (future) Greek parliaments changing their mind, a MoU prescribed that “no unilateral (..) actions will be taken (..) which would undermine the liquidity, solvency or future viability of the banks”.

The Troika acted as a debt-collector, taking over the debt of private banks and strong-arming generations of Greek workers to pay. If Draghi saved the euro, he did so by promising to combine it with a full assault on democratic welfare states. Of course, the OMT programme was never activated, but that does not mean the threat was not real, as the actions of the ECB in Greece showed.

In 2015, the ECB implemented Quantitative Easing (QE). As the ECB could not decrease the near zero short-term interest-rate it charged to private banks, it decreased long-term interest rates by buying up bonds. Greece was excluded from the programme, even though it needed it most and even though the risks of QE were shifted to National Central Banks. On the other hand, tax-evading and/or polluting firms like Shell and Volkswagen were included.

Quantitative Easing served banks and multinationals. This was the aim, for if the ECB had really wanted to stimulate investments, it could have provided loans directly (or via an ESM-like vehicle) to public projects at the zero interest-rate it has been “charging” banks over the last decade. These were not the only two ECB-actions favouring banks in the Draghi-period; another example was revealed by the Financial Times.

Will Lagarde steer the ECB in a different direction? At least she didn’t work for Goldman Sachs; in 2007-2011 she was the French Minister of Finance and since 2011 she has headed the IMF. She was thus not involved in the IMF-decision in 2010 to lend public money to an insolvent Greece to make private creditors whole. Lagarde even argued against it, stating in early 2010 that IMF-financing for Greece would be as “odd” as financing California on behalf of the United States.

To be fair, since 2011 the IMF has increasingly played the role of good cop in the Troika debt-collectors consortium. It even published a study that came to be known as the IMF’s mea culpa. The summary indeed states that “fiscal multipliers were substantially higher than implicitly assumed by forecasters”. The IMF acknowledged that the economic abyss in which working and retired Greeks found themselves after the enforced austerity was not (publicly) predicted by them. This, however, did not alter the stance of the IMF one bit. The IMF had, as former IMF-employee Ashoka Mody states, “a moral obligation” to restructure the Greek debt “if for no other reason than to make amends for its complicity in the tragedy”.

Lagarde, however, would have none of it and stuck to the script, stating that: “A debt is a debt, and it is a contract”. That was disingenuous, since all banks, including French banks on her watch as Minister of Finance, did not have to honour their debts, instead being bailed out by taxpayers and by the interest rate decreases and asset-purchase programmes of the ECB. Both the IMF and the ECB bled Greece dry on behalf of private banks. While the rhetoric of the IMF has become somewhat remorseful, its actions remain as merciless as the ECB’s.

Perhaps Lagarde could not have changed the IMF’s course even if she wanted to. But in that case, she will also be unable to change the ECB’s course and there is no point therefore in lauding her appointment. What it all adds up to is that there is no substitute for a democratic overhaul of the ECB, which doesn’t answer to any parliament, national or European, and which will stop at nothing to aid and abet private banks. No wonder then that the ECB did not protest the appointment of their new President. The ECB knows perfectly well that she will likely stick to the creditors-script, and the weak will suffer what they must. 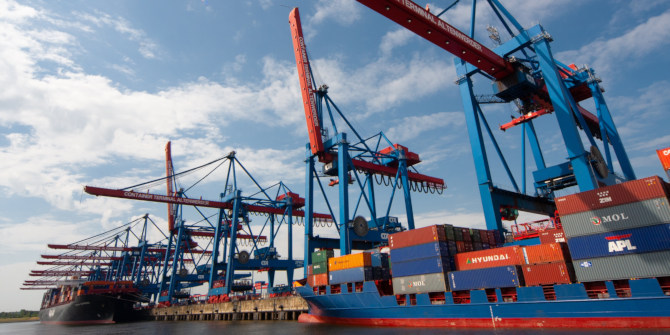 New trends in trade and sustainable development: A revolution in the making?