Academics and political commentators frequently cite responses to globalisation as an explanation for some of the recent changes that have occurred in European politics. But how do citizens actually make sense of the concept of globalisation? Drawing on a new study, Matthias Mader, Nils Steiner and Harald Schoen provide evidence that German citizens hold meaningful attitudes toward globalisation, and that these attitudes shape their electoral preferences.

The politicisation of immigration and European integration has transformed western European politics over the last few decades. Previous research has sought to explain these developments by suggesting that politics is now shaped by a new conflict over globalisation and the issues associated with it, a conflict between ‘integration’ and ‘demarcation’. This notion of a globalisation divide has gained attention in the broader public debate as well. Journalists and pundits have pointed to a growing political rift between the winners and losers of globalisation in relation to Brexit, the election of Donald Trump, and the electoral gains of right-wing populist parties in several European states.

Against this backdrop, it seems like a glaring omission that public opinion researchers have paid little specific attention to citizens’ stances toward globalisation. When asked about ‘globalisation’, do citizens respond meaningfully and do their stances matter for party preferences? In other words, is there a genuine globalisation divide in the public mind?

On the one hand, it is a well-established finding in public opinion research that many citizens have difficulties handling abstract concepts and display little interest in the complexities of large-scale social change. From this perspective, it seems questionable that citizens have meaningful views on an abstract concept like globalisation. Public opinion on ‘globalisation’, as measured in opinion surveys, may be little more than fleeting responses that are irrelevant for citizens’ political behaviour.

On the other hand, the term ‘globalisation’ has entered the standard vocabulary of political discourse, and at least since the 1990s there has been recurring and visible public protest against it. Parties of both the left and right also rely on the term to communicate their political agendas. Western Europe’s far left parties, for example, criticise ‘globalised capitalism’ as part of their broader anti-capitalist ideology and critique the European Union for promoting it. The radical right attacks globalisation, often explicitly, in particular because of its implications for immigration. As political elites invoke the concept of globalisation, perhaps as part of ‘communitarian’ or ‘cosmopolitan’ ideologies, citizens might have developed a sense of the concept and hold meaningful, crystallised attitudes toward it, that are, in turn, relevant for their evaluations of political parties.

In a recent study, we explore these issues with an in-depth analysis of German public attitudes toward globalisation. The German case is particularly instructive: The new globalisation issues, in particular European integration and above all immigration, have only recently led to a change in the German party system, namely the rise of the radical-right party Alternative für Deutschland (AfD). In contrast, other western European countries have been experiencing a pronounced political conflict over new policy issues associated with globalisation for decades now, with parties openly attacking ‘globalisation’. If we find German mass belief systems to be characterised by a globalisation divide, these findings are likely to carry over to countries in which (radical-right) parties have promoted an explicit anti-globalisation ideology for years.

To analyse public attitudes toward globalisation, we turned to the campaign panel survey conducted on behalf of the German Longitudinal Election Study in the context of the German federal election of September 2017. Over the course of eleven months, this survey repeatedly asked the same sample of respondents about their agreement with the statement that ‘globalisation is a good thing’ and registered responses on a five-point scale running from ’Disagree completely’ to ‘Agree completely’. Our analysis reveals a remarkable stability in individuals’ responses. Comparing pairs of responses given at different points in time, roughly 55 per cent of respondents gave exactly the same answer, with another 35 per cent changing their response by only one scale point. By way of comparison, globalisation attitudes are as steady as the perceived duty to vote, which research shows to be very stable over time and highly relevant for electoral behaviour. This suggests that German citizens’ attitudes on globalisation are real and not merely fleeting, top-of-the-head-responses.

Note: Correlations of latent variables from exploratory structural equation modelling. Only correlations larger |.2| are shown. For more information, see the authors’ accompanying paper in the Journal of European Public Policy.

But does it actually matter how citizens evaluate globalisation? When it comes to voting behaviour, we found that it does. Our statistical models reveal that globalisation attitudes help to explain vote choices in the 2017 German election. Importantly, this holds even if we account for attitudes toward the specific issues related to globalisation. This suggests that ‘globalisation’ carries a symbolic value, and that attitudes toward this object amount to more than the sum of attitudes toward more concrete issues. We illustrate the effects on voting in Figure 2, which reports the predicted probability of voting for the Christian-democrats (CDU/CSU), the liberal FDP, the far-left Die Linke (The Left) and the radical-right AfD. The predicted probability of voting for the CDU/CSU is only 9% among respondents most critical of globalisation but 30% among globalisation’s strongest supporters. The results for AfD choice are a mirror image, with 20% probability among radical critics and 9% among enthusiasts. 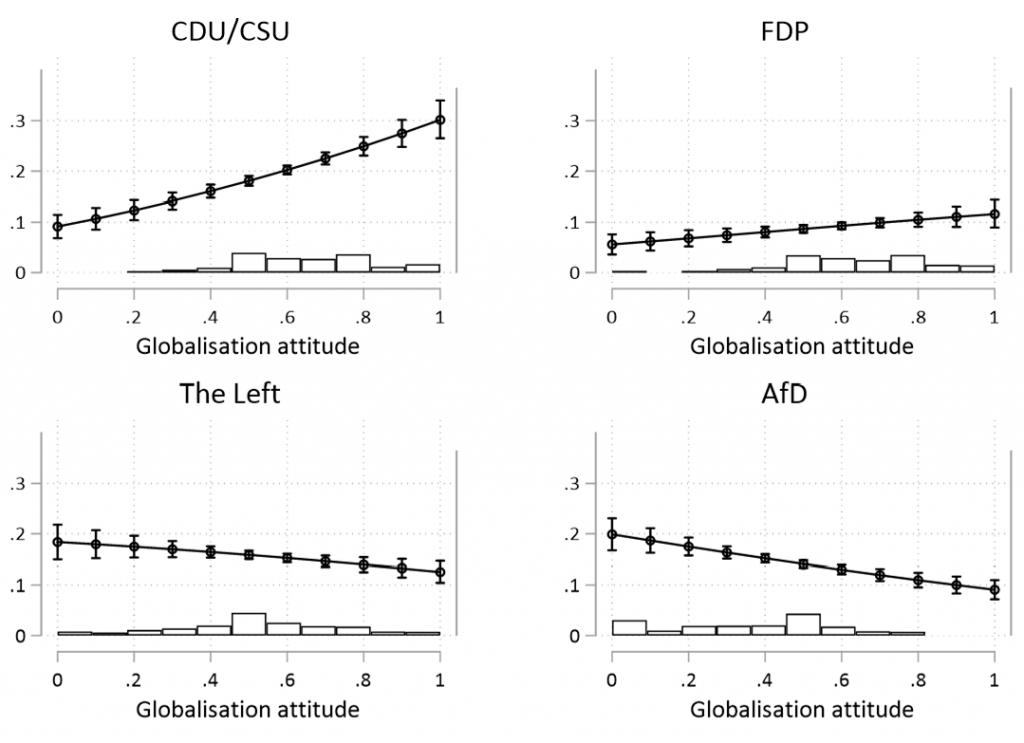 In sum, these results indicate that globalisation and associated issues represent a consequential divide at the public level in Germany. What are the larger implications of these findings for the politics of globalisation? Perhaps most importantly, public statements about ‘globalisation’ may have electoral consequences. As public attitudes toward the concept are real, parties may attract and alienate voters by making positive and negative statements about globalisation without referencing specific issues. This might be even more the case outside of Germany where the earlier emergence of a successful ‘demarcationist’ challenger party that explicitly ties all facets of globalisation together in a consistent narrative might have caused attitudes toward globalisation to be even more symbolically charged.