The amount of legislation a political system produces is an important indicator of its performance. Yet as Dimiter Toshkov explains, when it comes to the adoption of new legislation, the last European Parliament and Commission were among the least productive in recent history. He argues that a less political and more pragmatic Commission may be more successful in finding the scope for new agreements.

As November is drawing to a close, the new European Commission is still waiting for the approval of the new European Parliament (EP) to start its work. This prolonged interregnum provides a good opportunity to look back and assess the record of the previous 8th EP, which held its last session in April 2019, and the outgoing Commission led by Jean-Claude Juncker, which entered office more than five years ago in November 2014.

One important indicator of the performance of any political system is its legislative output, or the amount of legislative acts it adopts over time. A focus on legislative output is especially relevant since the EU has no big army or large budget to exercise its influence, and must instead rely on the force of its laws and regulations. Hence, by looking at legislative output we can examine the health and prospects of the EU integration project more generally.

On this metric, the 8th EP and the Juncker Commission do not fare very well. In fact, the numbers show that these have been some of the least productive EPs and Commissions in recent history, ever since the introduction of co-decision in 1993 with the Treaty of Maastricht. 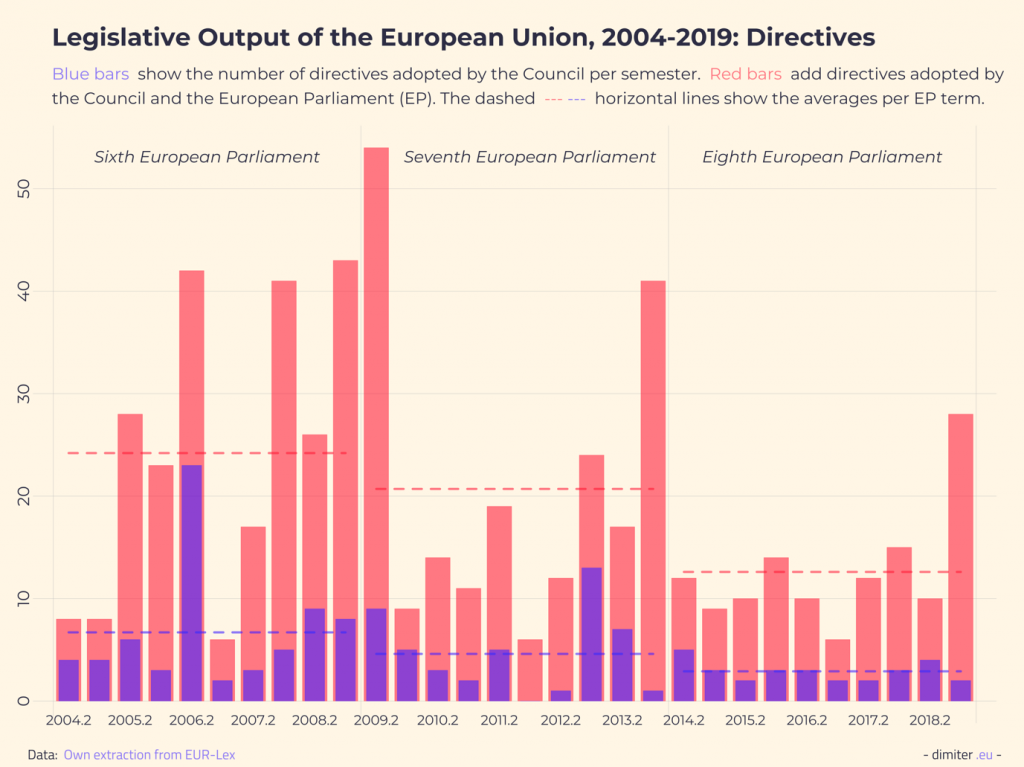 Part of the decline in the number of adopted directives can be explained by a switch to regulations as a favoured legal form for important new legislation. For example, the notorious General Data Protection Regulation (GDPR) – one of the few recent EU legal acts you might have head of – is, as the name indicates, a regulation rather than a directive. This is an important shift, because directives provide the EU member states with more flexibility about how exactly to implement the EU rules. 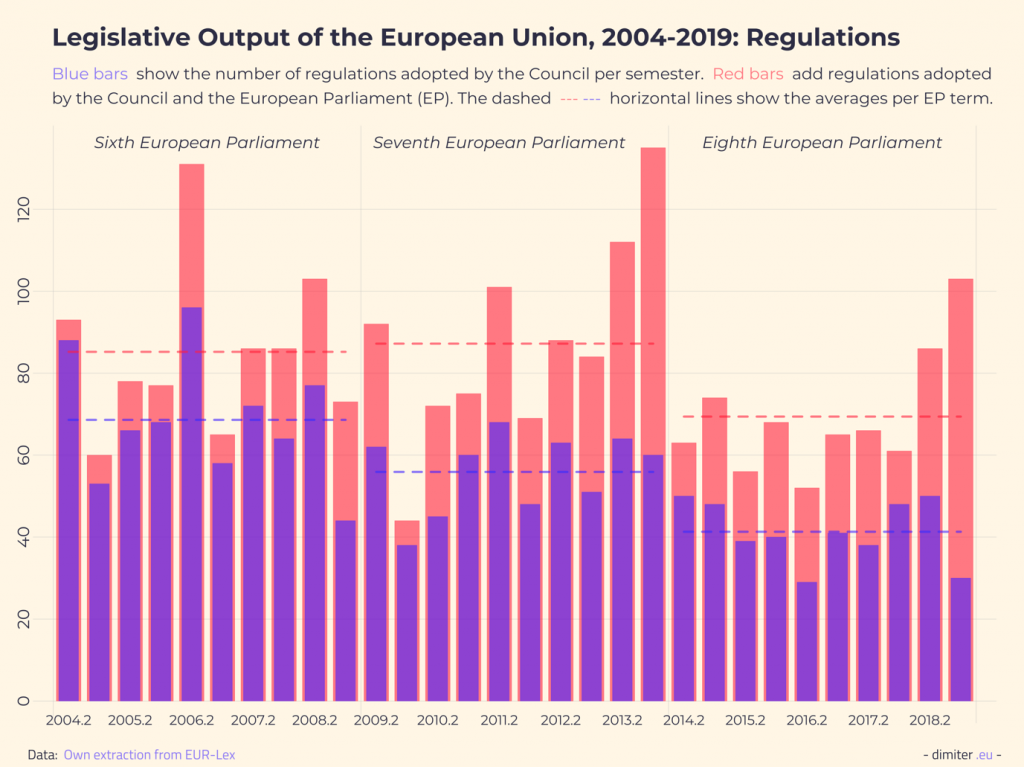 The pattern is more complex when it comes to decisions, which comprise a very diverse set of legal instruments under the same label – some have general applicability and others have a specific addressee, many are limited in their duration, and a large part concern matters of rather narrow interest, such as the appointment of heads of EU agencies and the like. 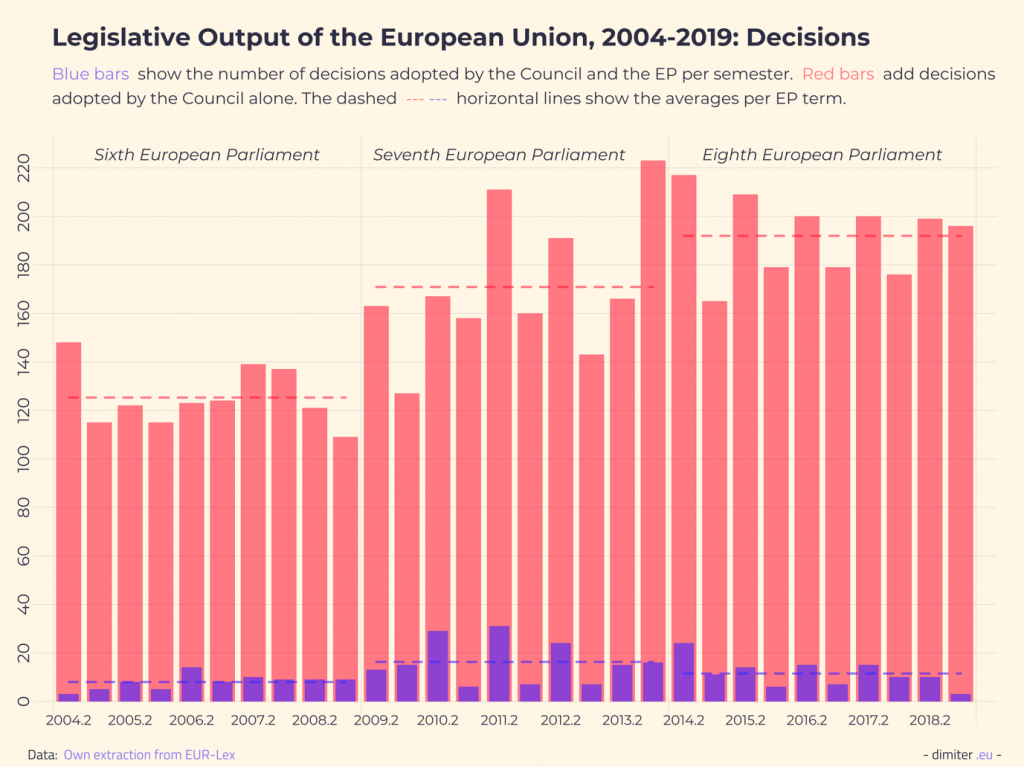 All in all, the 8th EP has completed the adoption of 493 legal acts, a significant 23% decline from the 637 adopted by the 7th EP. This makes for less than two acts per plenary sitting1 and for less than one legal act per MEP over a period of five years! Of course, passing legislation is not all the EP does: it also adopts resolutions, negotiates the budget, asks written and oral questions (a total of 46,496 during its last term), and more. Still, legislating remains the most important task of a legislature, and the last EP has not done a lot of that.

It is especially striking that in the past five years the EP has adopted only 59 new, rather than amending, directives and regulations (for 2009-2014, the number is 95). A new legal act indicates that the EU is legislating in a new area, while amending legislation only modifies rules in areas where the EU already has established its presence. In other words, the vast majority of legislative activity in the past five years has gone into maintaining and updating existing legislation rather than expanding the reach of the EU into new areas and issues. 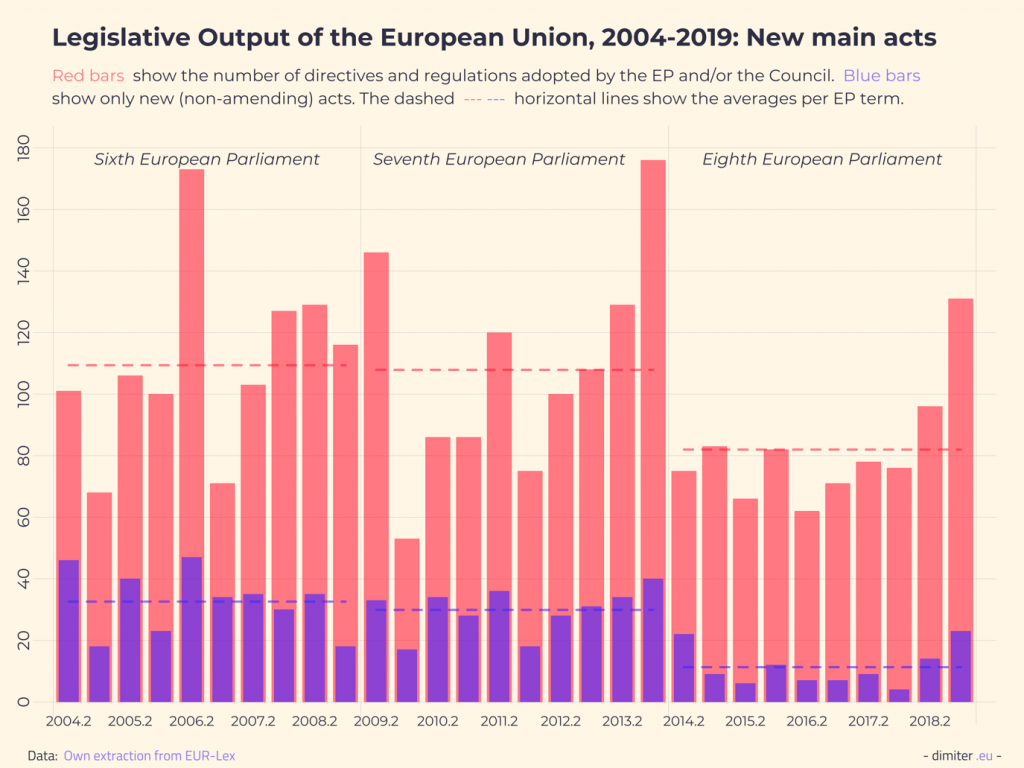 In sum, the directive is almost disappearing from the legislative output of the EU, the numbers of regulations and EP decisions are also down, and there have been very few new, rather than amending, legal acts adopted over the past five years.

The perils of a more ‘political’ Commission

The important question is, of course, why. There are multiple possible answers, and none that are fully satisfactory. First, the Juncker Commission focused its activities on ten priority areas, not all of which required legislative action. Second, the decline in legislative output can be related to the Better Regulation programme of the European Commission, which aims to reduce the regulatory burden and simplify legislation. However, the number of legislative proposals that have been scrapped as a direct result of the programme is very small, and even these might have been blocked for political reasons before being abandoned in the name of better regulation. Moreover, regulatory simplification often demands legislative action in order to amend existing acts or adopt new legislation. And some critics see the Better Regulation initiative as a justification for the EU’s failure to maintain and expand its regulatory reach rather than the reason for its declining legislative productivity.

It is unlikely that falling legislative productivity is a direct result of the Eastern enlargement of the EU: the decline is more recent and there is no systematic data that member states from Eastern Europe have been the ones putting the brakes on the EU legislative process. But increasing diversity of preferences and interests in the EU – between countries, but also between political parties and electorates – certainly plays some role in accounting for the decline in legislative output.

The 8th EP featured more Eurosceptic, nationalist and populist parties and MEPs than before, though not in numbers that could have blocked, on their own, a large share of the EU’s legislative activities. Yet, in combination with the increasing presence of Eurosceptic, nationalist and populist parties in government at the national level (and by extension in the Council of Ministers in Brussels), they do limit the range and scope of new laws that can gain approval in the complex decision-making procedures of the EU.

During the past five years, the Juncker Commission has not shied away from political conflicts with some member states, most notably in the field of migration. The Commission deliberately pushed proposals forward in the presence of strong, vocal and committed opposition in order to make political points, by exposing certain member states, such as Hungary, for the views that they hold. No matter whether we consider this to be a good political strategy from the Commission, it is certainly not a very good way of getting things done.

In other cases, the Commission seems to have lost its ability to anticipate the reactions of the member states and the strength of their resistance. Instead of going for minimal changes to the status quo that would have been feasible and made small but tangible progress, it has overplayed its hand by pushing for more radical changes that never made it into law (at least within the limits of its term). The mobility (road transport) package that is still stuck in the EP or the failed regulation of lobbying activities at the EU institutions are two cases in point. The lack of anticipation, adjustment and lost political capital in fruitless negotiations all contribute to the rising share of failed legislative proposals. Ultimately, the declining legislative productivity of the EU can be seen as a result of the more ‘political’ Commission that Jean-Claude Juncker promoted.

What does the future hold for the legislative output of the EU? The new, 9th EP will have to accommodate an even larger number of Eurosceptic members, though in absolute terms they are still not numerous enough to block the legislative process in the EP. But they, and Eurosceptic ministers sitting in the Council, do limit what it is possible to achieve and the areas where European integration can move forward. At the same time, there is urgent action needed in many policy areas – from asylum and climate to transport and welfare. A less political and more pragmatic Commission might be more successful in finding the scope for new agreements. Instead of antagonising member states with bold but ultimately doomed policy initiatives, the Commission might focus on what it used to do best: finding common ground in the face of diverse interests to push European integration slowly and gradually, but forward nonetheless.

1. The 8th EP held 279 plenary sittings during 86 sessions for a total of 2,411 hours and 25 minutes. This averages to around 5 hours per legislative act in the plenary. But, in fact, the EP spent only 319 hours on legislative debates during its plenary sessions (13% from the total session time, which goes up to 27% when we include the time for votes and explanations of votes). This makes, on average, around 40 minutes of legislative debate in the plenary per legal act.

2. According to a recent study by the EP’s research service, the Juncker Commission made 512 proposals related to its ten priorities (from 547 foreseen). Of these, 70% (361) have been adopted, which leaves 30% (151) that had not been finalised by the end of the EP’s term. Even if the new EP decides to continue to work on some of these files, the share of non-completed proposals still remains rather large. See also the Legislative Train for an overview of ‘derailed’ proposals. 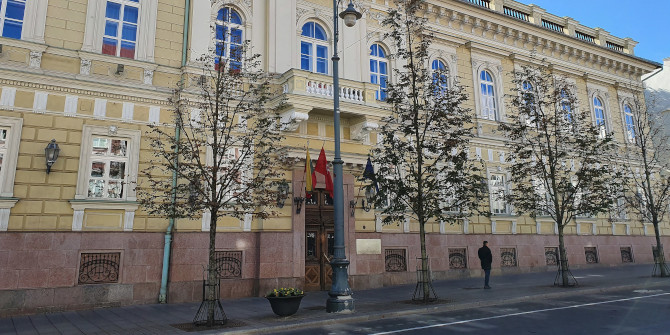