The election of liberal politician Thomas Kemmerich as regional governor of the German state of Thuringia has shaken up German politics. Julian Göpffarth writes that the surprise vote shows far-right ideas in Germany not only resonate with the economically left-behind, but also with an educated bourgeoisie.

Wednesday, 5 February 2020 is likely to enter German post war history as a political earthquake. Against all expectations, the incumbent left-wing regional governor Bodo Ramelow, who has been in office since 2014 and presided over a coalition between Die Linke, the SPD and the Greens, was not confirmed in office by the Thuringian parliament. Instead, the so far largely unknown liberal democrat (FDP) politician Thomas Kemmerich was elected regional governor of the East German state by the centre-right CDU, the liberals and the far right AfD.

This outcome is not only surprising because Ramelow was widely expected to be re-elected, but also because the FDP had barely made it into parliament in last October’s regional elections. Some reports suggest that the surprising support for Kemmerich was not spontaneous, but an option developed beforehand by networks across Thuringia’s FDP, CDU and AfD supporters.

The vote has been widely condemned by most parties at the federal level and stirred up fears that Germany may witness a coalition of the centre and radical right, similar to the one that brought Hitler into power in the 1930s. The handshake between Kemmerich and the AfD’s co-leader in Thuringia, Björn Höcke, has been taken as a symbol of a renewed coalition among bourgeois conservatives, ultra-nationalists, far-right populists and even fascists.

Several party leaders, including the CDU’s leader, Annegret Kramp-Karrenbauer, have called for snap elections, chancellor Merkel has urged her party to “reverse the results” – calls that both the local CDU and FDP rejected at first. But under the increasing pressure, Kemmerich finally gave in and stepped down. The AfD, on the other hand, has celebrated the outcome as a “political revolution”, the victory of “reason” and of a “bourgeois bloc” over a “leftist front”. It sees the election of Kemmerich as proof of the bourgeois character of the AfD and evidence that it is a party of the centre-right rather than the far-right margins.

In German public and political debates, the repeated attempts by the AfD to brand itself as bourgeois have been met with outrage. The idea of a bourgeois far-right coalition not only stirs dark memories from the past, it also goes against the general portrayal of far-right parties as populist and thus anti-bourgeois and anti-intellectual. The educated bourgeoisie is commonly held to be a bulwark against the populist far-right. Yet, what if the AfD is right? What if the AfD, its reactionary politics, historical revisionism and cultural racism resonate not only with the uneducated left-behind, but also with an educated bourgeoisie?

Intellectual support for the far-right

In a new study, I have drawn on ethnographic fieldwork in Dresden to examine how nostalgia and memories of the socialist past drive and legitimate intellectual support for the populist far right. My research shows that educated bourgeois circles in East Germany, including such internationally known writers as Uwe Tellkamp, can facilitate support for the populist far-right rather than being a bulwark against it.

My observations contradict the widely shared view that far-right populism is only driven by the nostalgia of marginalised, uneducated, backward-looking, economically left-behind voters. Rather, nostalgia drives educated bourgeois intellectuals to support the populist far-right AfD and social movements such as Pegida. Instead of simply being backward-looking, nostalgia is for them a forward-looking, constructive and mobilising force that is infused with an “anxious hope” to still be able to avert a multicultural Germany. It feeds into an educated bourgeois activism for a white nationalist future.

The nostalgia driving this support is multidirectional in that it draws on a “positive nostalgia” and a “negative nostalgia”. The “positive nostalgia” aims to replace an alleged holocaust-centred national identity based on guilt with a celebratory memory of national pride. It is a political memory that has been characteristic of the post-War West German far-right. Yet, it has never managed to gain larger support. Today, in the post-socialist context of East Germany in Dresden, this “positive nostalgia” converges with a “negative nostalgia” characterised not by a celebration of socialism, but a conservative educated bourgeois resistance to it. It draws on individual and social memories of educated bourgeois dissidence to the socialist GDR in the 1980s and transposes them onto the context of today to mobilise for the far-right’s white nationalist future.

This is facilitated by the fact that the memory regime of the GDR aimed at framing the socialist state as proudly anti-fascist. Largely silencing the Nazi past, it nurtured a culture based on national pride, local traditions and Heimat (homeland) and linked it to socialist ideals. Drawing on these cultural repertoires and memories, intellectuals and parts of the educated bourgeois milieus in Dresden make a far-right political memory resonate with the concrete local context. They not only help to provide the cultural opportunity structures for the AfD’s electoral success, but also use the memories of the socialist past to legitimate the far-right’s political project of a white nationalist future – a move that was widely used by the AfD in last year’s East German regional elections.

Converging with a far-right cultural racism, the memories of an anti-socialist resistance become a central element of a distinctly white national identity that is today mobilised to resist against immigration and an alleged Islamisation of Europe. Intellectuals here style themselves as defenders of a civilised culture that is under threat by a renewed far-left totalitarianism from within and the immigration of “uncivilised” others from without.

As several studies have shown, education is not an obstacle to the nativist, racist and anti-Muslim resentments represented by the AfD and other far-right parties in Europe. My findings support the view that, alongside notions of civilised superiority, educated bourgeois culture and intellectualism in Germany and beyond fit well with the cultural racism promoted by the far-right. In West Germany, this symbiosis is less represented by the AfD, but by the so called Werte Union, a small but vocal group inside the centre-right CDU. While the group is eager to distance itself from the AfD, both share the view of a bourgeois resistance to immigration and Islamisation.

In recent years, these far-right circles inside the CDU and the AfD, alongside sympathisers from the FDP, have formed loose common networks that allow for the mainstreaming of the radical-right and a radicalisation of the centre-right. Categorically denying the bourgeois character of the AfD means denying the political dimension in the AfD’s rise by turning it into a problem that can be solved economically. What is needed instead is a political answer to the fact that far-right ideas resonate with voters beyond the margins and that intellectualism complements rather than contradicts the cultural racism the far-right propagates.

Julian Göpffarth – LSE
Julian Göpffarth is a PhD candidate at the LSE’s European Institute and a doctoral fellow at the Centre for the Analysis of the Radical Right. His work focuses on intellectual support for the populist far right in East Germany, the ideological transformations informing it and the role intellectuals play in the far right. 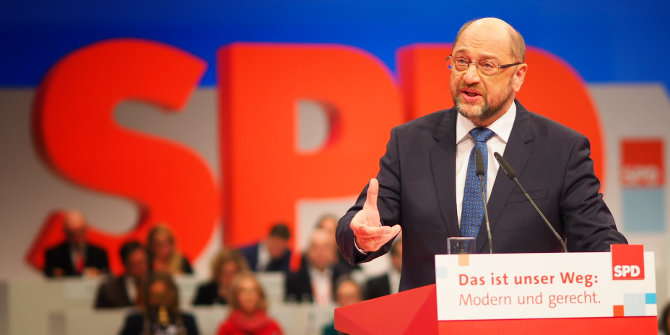