Irish voters head to the ballot box today. According to recent national opinion polls, we are on the cusp of a seismic shift, with the outgoing Fine Gael led minority coalition bound for defeat and the dominant two parties, Fine Gael and Fianna Fáil, on course for their lowest combined vote share ever. Meanwhile, Sinn Féin, a party historically associated with the violent conflict in Northern Ireland, look set to gain its largest share of votes and seats in an election in the Republic. These expectations have been driven primarily by relentless mining of the opinion polls, which imply that since Taoiseach (Prime Minister) Leo Varadkar called the election on 14 January, the government’s support has slipped back considerably, with a corresponding surge in support for Sinn Féin.

These opinion polls form the basis for many publicised forecasts of the election, some scientific and others not. Serious election forecasting aims to present information about the future behaviour of voters, with the sine qua non of being available at a nontrivial distance from the election itself. Projections based on opinion poll vote intention a few days before the election offer little substantive interpretation of the outcome, and can sometimes in themselves fall quite wide of the mark, for example the pre-election poll misses in Australia in 2019 and Britain in 2015. In this contribution, we take an alternative tack by exploring another means of forecasting elections in Ireland. We provide the first test of a well-established political economy model based on advance measures of electoral fundamentals, indicators that eschew vote intention surveys.

Our political economy model rests on the intuition that general elections are referendums on an outgoing government’s performance. The equation assumes that incumbent support is a function of political and economic variables, measured some way out from polling day. The models build on the economic voting literature of reward and punishment for economic performance. To cover the handling of political issues, these models generally incorporate an indicator tapping the popularity of the administration, along with some measure to account for the inevitable cost of ruling, in this case longevity of the party in office. Thus, the model could be summarised as:

Considerable research demonstrates that such structural models perform well in a variety of industrial democracies, including the United States, Britain, France and, more recently, in the Netherlands, Belgium, Japan and Spain.

But what about Ireland? Drawing on the political economy notion, we focus on predicting the seat share of the outgoing government. We develop a simple model that explains the seat share by means of three pre-election gauges, namely: 1) the extent of GDP growth two quarters before the election; 2) the government approval six months before the election; and 3) the number of days the largest party in the government (i.e., the party with the biggest seat share in the coalition) has been in continuous office. We estimate an ordinary least squares regression equation for the 12 Irish Dáil elections from 1977 and 2016. One might fear such a simple, ex-ante effort was doomed to fall short. However, regarding accuracy, the fit statistics for this model are encouraging, with a high explanatory power (an R2 of 0.92), and a reasonable root mean square error of 3.5 percentage points.

In Figure 1, we compare model predictions of the number of seats forecast for successive incumbent governments with the actual number of seats obtained (black) in the said election. This shows the model performs well overall in offering a reasonable prediction of how incumbent Irish governments fare in elections. The average prediction error of seats is 4 seats across all the elections. Nonetheless, we acknowledge that the model performs better for some elections (e.g., 1977, 1982.2) and, most recently in 2016 (where the forecast error was just two seats); whereas for other elections the performance is less impressive (e.g., 2002 and 2007, with an error of seven seats, respectively). 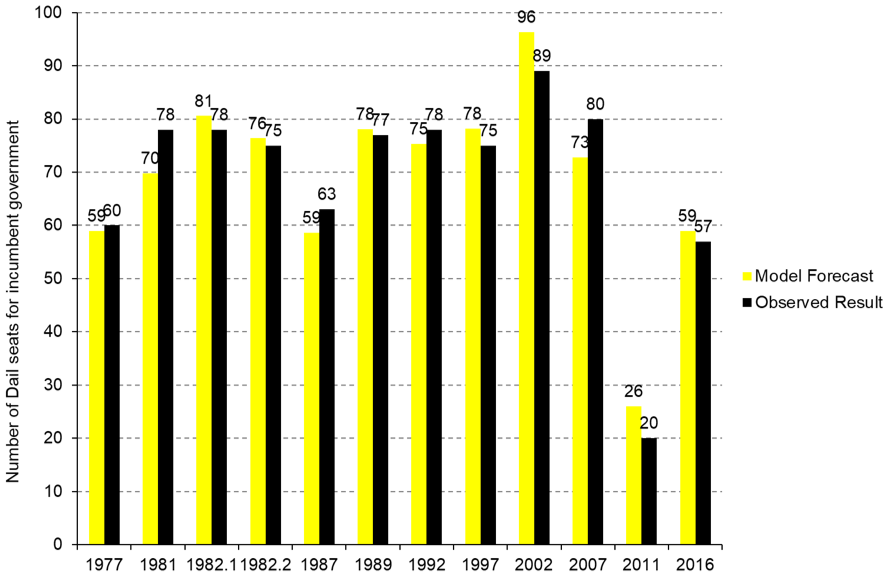 If applied to the 2020 election outcome, what does this preliminary Irish political economy model suggest? Plugging in the available numbers for our three indicators of government support (approval, growth and longevity), the equation yields a seat share for the outgoing government (Fine Gael and the Independent Alliance combined) of 33.7 percent, which translates to 54 seats in the new Dáil (of 160). This estimated loss would represent a drop of two seats on the combined number of seats won by the incumbent government in 2016, a loss, albeit a small one. Given that the incumbent coalition was a minority, with only 36 percent of seats to begin with, its continuance following the 2020 election might be regarded as improbable.

Nonetheless, despite the fact the model indicates the government will fall back, we recognise it contrasts with current campaign opinion polls, which imply more severe losses. It begs the question of which approach (opinion polls versus the political economy model) is likely to yield better estimates? For some advanced democracies, research has shown that election forecasts based on vote intention polls are not infrequently bested by alternative approaches, including political economy models. Additionally, there is evidence (forthcoming paper by Jennings et al.) that polls ‘too close’ to the election may offer no significant improvement and, on occasion, be less satisfactory than a structural model with more distance.

On the other hand, the political economy model applied here represents only a first application in Ireland and may require further tinkering. Moreover, since structural models are based on early measures of fundamental conditions, some are concerned that they may not pick up later campaign dynamics. Indeed, the approval of the Fine Gael/Independent Alliance government has fallen as polling day has approached and this may explain why the fortunes of the government look much less rosier in the opinion polls. Nevertheless, there is evidence to suggest that structural models have generally managed a low error rate despite their early lead time.

Despite these caveats, for the forecasting enterprise to have value, it must state its case in advance, preferably with a theoretical framework. For instance, a structural model can offer a sense of how a government might assess its chances heading into a campaign. Applied to the Irish case, it suggests an explanation for why the Varadkar government decided to go to the people earlier than many had anticipated.

Our model offers merely a first-cut structural projection of the 2020 Irish election, a model that has proved fruitful in accounting for the seat share of previous incumbents. It provides an additional prism through which to forecast Irish elections, via the application of a well-established and internationally applicable model, in the process bringing forward the study of the fascinating case of Ireland. Inevitably more ink will be spilled over rival approaches to election forecasting after the 2020 election result registers itself.

Note: This article first appeared on our sister site, Democratic Audit. It gives the views of the authors, not the position of EUROPP – European Politics and Policy or the London School of Economics. Featured image credit: European People’s Party (CC BY 2.0) 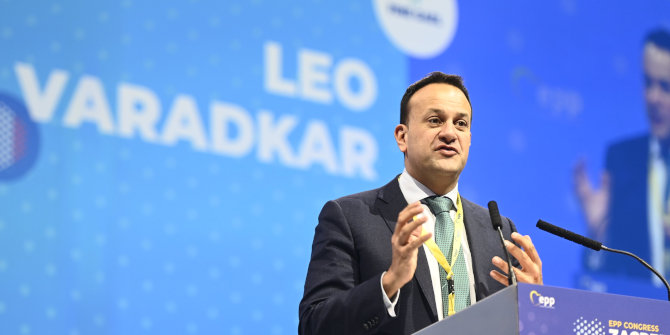