A battle of ideas dominated the academic debate on the Eurozone crisis. One view stressed the importance of fiscal discipline, while the other highlighted the systemic roots of financial turmoil. Drawing on a new study based on a quantitative text analysis of ECB Executive Board members’ speeches, Federico Maria Ferrara shows how the ECB progressively moved from a fiscal to systemic narrative of the Eurozone crisis. The findings indicate that this shift anticipated and accompanied ECB President Mario Draghi’s “whatever it takes” pledge in summer 2012, and that the ECB’s ideational turn was incremental and driven by policy learning dynamics.

Economic and financial crises have always captured the attention of scholars interested in the role that economic ideas and narratives play in policymaking. During crisis episodes, conventional instruments are often ineffective, old certainties are overthrown, and new opportunities for innovation arise. Hence, crises provide a space for new policy ideas to be adopted.

The European sovereign debt crisis, which peaked in the 2010-12 period, is no exception. Two competing narratives dominated the economic debate on the causes of the crisis: one interpretation stressed crisis-stricken countries’ fiscal laxity, whereas the other highlighted the systemic roots of financial turmoil.

The former view identified the cause of the crisis in the deterioration of crisis-stricken countries’ economic fundamentals (e.g., here, here, here and here), and prescribed fiscal discipline as an effective tool to cope with financial stress. Some also argued that fiscal adjustments – most notably, those based on spending cuts – are an effective tool to tackle the crisis scenario, as they may quickly reduce public debt without having negative effects on GDP growth (e.g., here, here and here). Hence, this economic narrative can be termed the fiscal discipline view.

The latter view underscored the presence of structural weaknesses in euro area governance, and pointed to the high correlation between sovereign risk and banking sector fragilities in the euro area – often referred to as the “sovereign-bank vicious circle” – as the root cause of the crisis. Systemic risk was seen as the main driver of negative self-fulfilling market sentiments, which were disconnected from underlying increases in government debt and budget deficits. Moreover, proponents of this view argued that austerity is a self-defeating strategy to restore investor confidence, and strongly advocated that the ECB should act as a lender of last resort. This economic narrative may be named the systemic risk perspective.

Both narratives informed crisis management policies carried out at the national and European level. However, they were given different relative weights at different stages of the crisis. How has the communication of the most decisive and powerful supranational actor in the euro crisis – namely, the European Central Bank (ECB) – reflected these two different views?

In a recent study, I resort to quantitative text analysis tools to study whether there has been variation in the way the ECB has portrayed the issues underlying the Eurozone crisis. I consider public speeches delivered by members of the ECB Executive Board between 2009 and 2017, focusing on the way they talk about fiscal policy and sovereign debt in euro area member states. To do so, I adopt the following procedure.

First, I draw text data from the ECB website, which provides complete coverage of all the inter-meeting speeches (i.e., public speeches given outside of the ECB Governing Council meetings) of ECB Executive Board members. My initial text corpus consists of 1,619 documents. The first challenge is to separate the communication on fiscal policy and sovereign debt issues from any other topic. I proceed as follows. When parsing text data from the ECB website, I maintain the same paragraph structure as raw HTM documents. Speech subdivision into short paragraphs is useful. While single sentences might miss out relevant information, full speeches typically encompass multiple themes and are not well suited for analyses focused on a single dimension. Hence, paragraphs make it possible to maximise the likelihood of selecting all relevant passages while minimising the overlap with non-relevant topics. This yields a text corpus of 72,224 paragraphs. 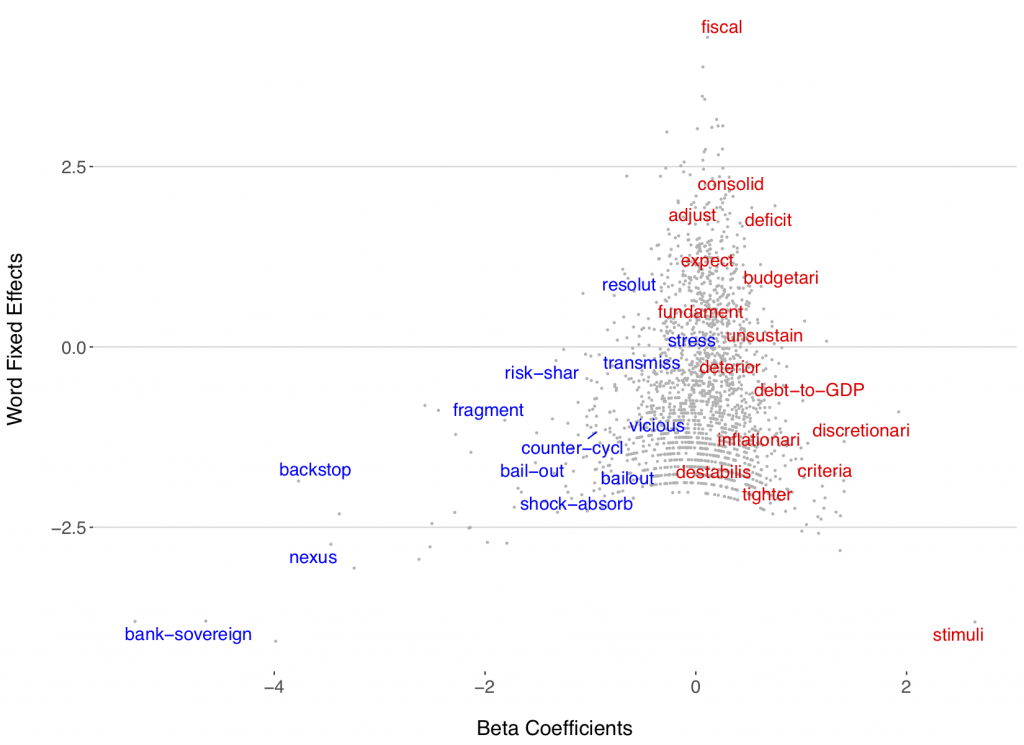 Third, after standard text pre-processing procedures (i.e., stemming and removal of stopwords), I apply the Wordfish scaling model from Jonathan Slapin and Sven-Oliver Proksch to the new corpus of fiscal paragraphs. Wordfish is an unsupervised method that measures the underlying policy dimension of a text corpus and provides estimates of policy positions by time or speaker unit. The underlying policy dimension identified in the ECB Executive Board members’ fiscal communication is shown in Figure 1, which plots word beta coefficients and fixed effects. High-beta words (i.e., those at the extremes of the x-axis) are associated with greater weights in the computation of the estimates shown in the next section.

In Figure 1, terms on the left-hand side of the spectrum underscore problems of systemic risk and financial contagion stemming from the “vicious circle” between sovereign debt and banks’ balance sheets. Some of the words with highest discriminative power clearly refer to the “sovereign-bank nexus” and “bailouts” of banks under financial stress, as well as to the need for more “risk-sharing” to tackle financial “fragmentation” in the euro area. Instead, words at the other end point to the importance of fiscal discipline, as they underscore the negative consequences that “deterioration” in fiscal “fundamentals” and “unsustainable” measures of fiscal “stimulus” have on investor “expectations”. Furthermore, they resonate with calls for fiscal “consolidation” and to respect the Maastricht “criteria”. The most frequent and median term is “fiscal”, which contributes to validating the automated procedure of corpus selection.

Figure 1 thus shows that the two economic narratives outlined above are present in the ECB’s fiscal communication. What has been the relative weight they have received since the outset of the crisis?

Figure 2 presents Wordfish estimates of ECB Executive Board members’ fiscal communication aggregated by quarter. Estimates are distributed along the latent dimension identified in Figure 1. Higher (lower) values indicate more communication related to fiscal discipline (systemic risk). The graph suggests the presence of significant ideational variation occurring within the ECB Executive Board during the crisis. The narrative on sovereign debt issues has changed from being focused on the importance of fiscal consolidation to highlighting issues of systemic risk and financial fragmentation in the euro area. Starting from high levels of austerity-focused communication, and after an additional surge during 2009, there is a declining trend in the weight attributed to fiscal discipline. This change occurs entirely between the end of 2009 and the end of 2012, with central bankers’ framing of fiscal issues remaining broadly stable since 2013. 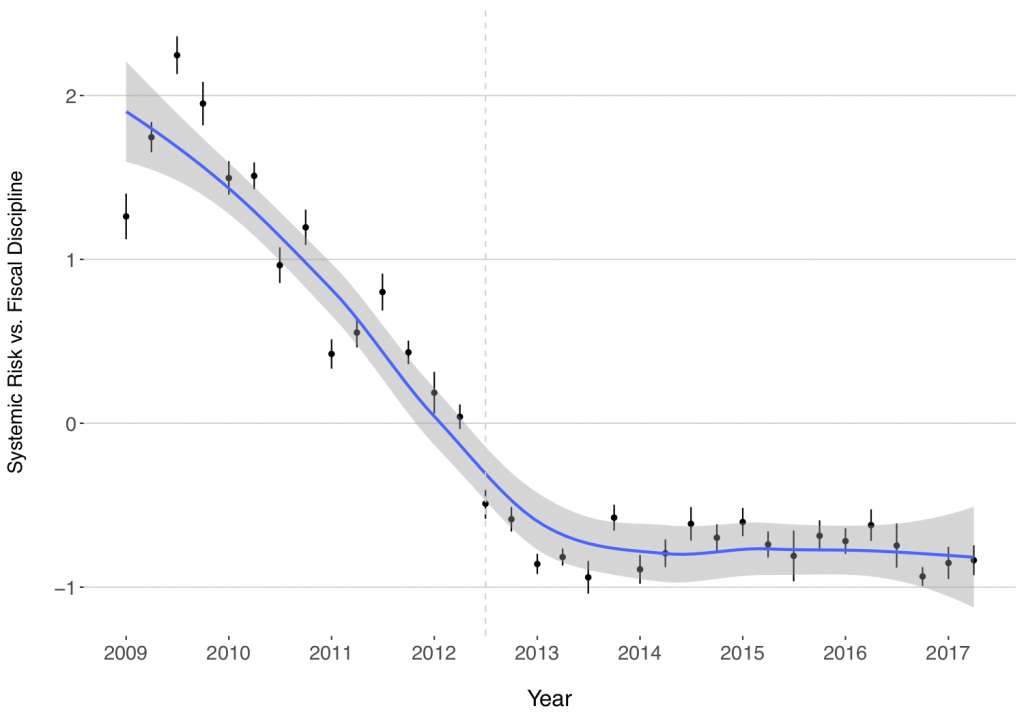 Figure 3 shows Wordfish estimates by board member. Interestingly, the relative position of each member along the identified dimension does not follow national lines. The difference in the relative importance attributed to systemic risk is very high between Jean-Claude Trichet and Benoit Coeuré, as well as between Jürgen Stark and Jörg Asmussen. Positioning does not appear to be influenced by a North-South divide either, as Southern European members Lucas Papademos, José Manuel González-Páramo, and Lorenzo Bini Smaghi talked more about fiscal discipline than Northern European members Asmussen, Sabine Lautenschläger, Yves Mersch and Peter Praet. Rather, the distribution of relative positions is characterised by a divide between old and new members of the ECB Executive Board. This is consistent with the variation over time shown in Figure 2. 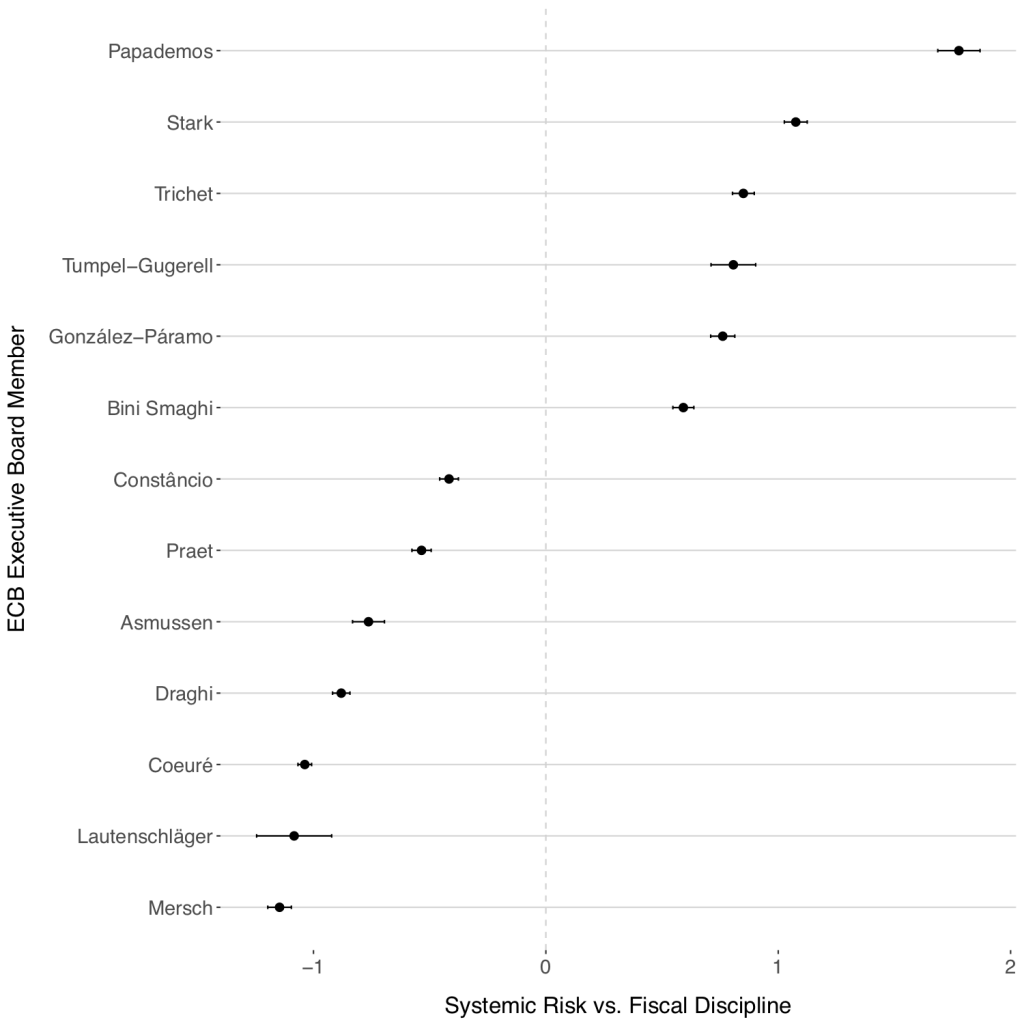 Finally, to obtain a more fine-grained view, Figure 4 presents estimates by ECB Executive Board member and quarter, thereby showing the relative position of each member over time. The evidence suggests this ideational turn was incremental and driven by policy learning dynamics, as there is a common trend towards systemic risk and no major structural break corresponding to board member replacements. 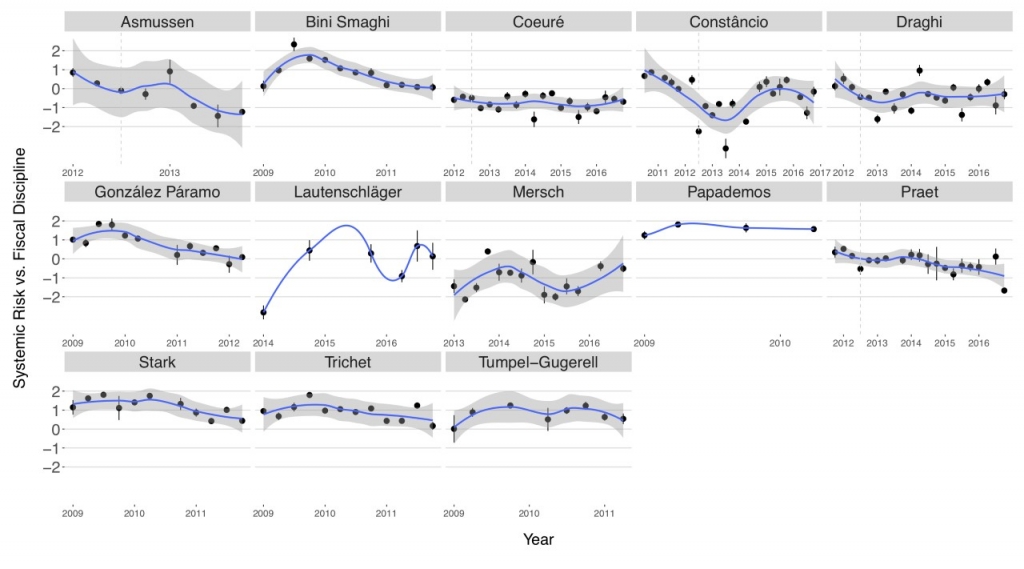 In sum, this analysis shows that the ECB has become more open to economic ideas that stress the systemic nature of the Eurozone crisis, while downplaying the importance of euro area member states’ fiscal misconduct. After an initial level of high support for the fiscal discipline view, the communication of ECB Executive Board members gradually shifted towards the systemic risk perspective. Crucially, this ideational turn anticipated and went hand in hand with the Outright Monetary Transactions programme, which was anticipated by ECB President Draghi’s oft-cited “whatever it takes” pledge and proved decisive in ending the Eurozone crisis.

These findings speak to a wider debate on the role of economic ideas in European policymaking. In particular, they make two contributions. First, most of the constructivist literature on the Eurozone crisis has focused on the role of neoliberal and ordoliberal ideas. Instead, this study highlights the importance of systemic risk narratives in European crisis management. Second, academics and commentators have often regarded the ECB as a stubborn defendant of austerity policies. In contrast, these results paint a more nuanced picture of economic beliefs inside the institution.

Federico Maria Ferrara – University of Geneva and European Central Bank
Federico Maria Ferrara is a PhD candidate at the University of Geneva and a Communications Specialist at the European Central Bank. He has also carried out research on the relationship between politics and financial markets, the economic origins of cultural backlash, and the effects of macroeconomic narratives on public opinion. He tweets @FedFerrara 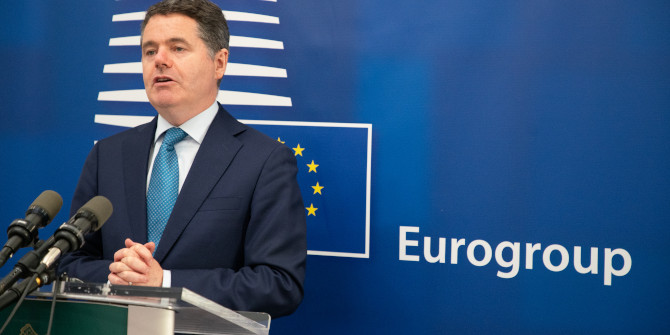