How do citizens respond to terrorist events? Drawing on a recent study, Steven M. Van Hauwaert and Robert A. Huber find that citizens do not necessarily respond in the way we might expect. Citizens do not increase hostility toward ‘out-groups’ as a direct response to terrorism, rather they increase solidarity within their ‘in-group’ and come together following an exogenous shock.

While most scholarship highlights the effect of terrorism on attitudes towards incumbents, leadership evaluations and electoral behaviour, terrorism also affects the public’s commitment to democratic ideals and the social foundations of liberal democracy. Recent studies in this regard focus on electoral implications, policy positions and, more specifically, out-group perceptions. While insightful, much of this evidence often remains topical, as well as observational. In a recent study, we complement this extant scholarship by first, designing a two-dimensional analytical framework that simultaneously examines solidarity amongst citizens (in-group) and the opinions of and interactions with communal “others” (out-group), and second, by leveraging a regression discontinuity design that provides more quasi-experimental insights.

Most terrorism literature generalises from post-9/11 findings, while European cases receive much less attention. This is unfortunate, as suggestive accounts of American exceptionalism and the specificities of 9/11 indicate that other contexts merit separate attention. We therefore shift our geographic focus to France and examine to what extent the emblematic November 2015 events in Paris and Saint Denis affected citizens. We rely on a unique opinion barometer by the Direction de la recherche, des études, de l’évaluation et des statistiques (DREES) that was in the field at the time of the events to examine how exactly citizens responded to them. We formulate two sets of expectations.

We argue citizens generally respond to non-domestic terrorist events by challenging some of the social foundations of liberal democracy, most notably by increasing out-group hostilities in the immediate aftermath of terrorism. Collective threats can easily be translated into negative perceptions of foreign elements and increasing hostility towards minority groups. In this regard, terrorist events amplify negative sentiments towards specific out-groups, particularly those perceived to be linked to the perpetrators. Recent evidence shows this was the case after the 2004 Madrid bombing and the 2015 Paris events. We therefore anticipated a spike in the issue salience of immigration, as well as an increase in anti-immigrant sentiments. In light of recent studies on Israel and Turkey, we simultaneously expected that citizens directly affected by terrorism would be more prone to polarise and identify with the political extremes.

Yet, terrorist events do not merely challenge liberal democracy. They also provide very specific routes to consolidate its social foundations and strengthen in-group solidarity. When confronted by collective threats, citizens in liberal democracies typically express a growing desire for social unity. They frequently reinforce their in-group reflections and evaluations of the political community in the immediate aftermath of non-domestic terrorism. Evidence following 9/11 and the 2004 Madrid bombing suggests that, after terrorist events, citizens also identify more with their country, as well as government institutions, political leaders and law enforcement. That is, terrorist events have the potential to mobilise citizens (e.g. by increasing participation) and bring a population together (e.g. through a rally effect). We therefore expected social cohesion amongst citizens, feelings of in-group integration and trust in the country’s political institutions to increase following terrorist events.

The results of our study were somewhat surprising. Figure 1 visualises our findings for citizens’ out-group hostilities. The left panel highlights that anti-immigration opinions are quite dispersed across France (Figure 1.A), while the middle panel shows that a majority of French citizens find immigration to be quite important (Figure 1.B). More importantly, neither panel provides conclusive evidence of clear changes after the terrorist events. Perhaps surprisingly, this suggests that, despite the framing of the terrorist events in terms of security and immigration, citizens did not necessarily respond to (this) terrorist threat through the lens of immigration. Even more, in line with a recent study by Bruno Castanho Silva, anti-immigrant opinions and the salience of immigration appear largely unwavering.

Figure 1: The evolution of out-group variables

Note: The cut-off point (dashed line) is 14 November 2015, as the terrorist events occurred in the night of 13 November. No respondents were interviewed the day after the events (Sunday, 15 November). The spline represents a locally weighted regression line (loess).

The right panel (Figure 1.C) assesses political polarisation and illustrates the lack of centrifugal movement of citizens in ideological or political terms. The public does not move towards the political extremes, and citizens do not distance themselves further from their ideological counterparts following the terrorist events. Altogether, while we expected the terrorist events to challenge some of the social foundations of liberal democracy, the different indicators in Figure 1 suggest little to no relevant changes in out-group hostility as a direct reaction to the terrorist events.

Figure 2 shows our findings for citizens’ in-group solidarity. The left panel (Figure 2.A) indicates the perceived social cohesion amongst French citizens is rather low, whereas the middle panel (Figure 2.B) highlights the societal integration levels are higher. Regardless of the absolute levels, we also observe a sizeable shift towards higher perceived cohesion and integration after the terrorist events. In line with then-president Hollande’s infamously low approval ratings, as well as equally low public satisfaction with then-prime minister Valls, the right panel (Figure 2.C) indicates limited trust in the central government’s abilities before the terrorist events. We do, however, observe a significant post-terror shift towards more trust in government.

Figure 2: The evolution of in-group solidarity

Note: The cut-off point (dashed line) is 14 November 2015, as the terrorist events occurred in the night of 13 November. No respondents were interviewed the day after the events (Sunday, 15 November). The spline represents a locally weighted regression line (loess).

Figure 2 thereby suggests the public responds to terrorist events with increased in-group solidarity. At least in the immediate aftermath, citizens come together and express trust in their leaders following collective threats. While such rally effects are not an uncommon finding in the terrorism literature, they are nonetheless remarkable in times where the representative character of liberal democracy is under tremendous pressure. Particularly, in a centralised and elitist country like France, this suggests citizens are not necessarily rejecting politics as such but might be dissatisfied with the implementation of representation by their elites.

The combined findings confirm the democratic resilience we know citizens to have. Our study shows that, much like an undeserved World Cup semi-final victory (e.g. France – Belgium in 2018), critical events can bring a country together and unite its citizens – even if only for a moment. While we do not necessarily want to argue that terrorism contributes to democratic consolidation, we do highlight that instant threats to democracy do not necessarily undermine citizens’ responsiveness and their support for some of the central pillars of liberal and representative democracy. Even more, we show that terrorist events can improve what has long been perceived as an eroding component of liberal democracy, namely in-group solidarity. Terrorist events can strengthen the popular legitimacy of political regimes and instigate rally effects around political institutions.

For more information, see the authors’ accompanying paper in the European Journal of Political Research 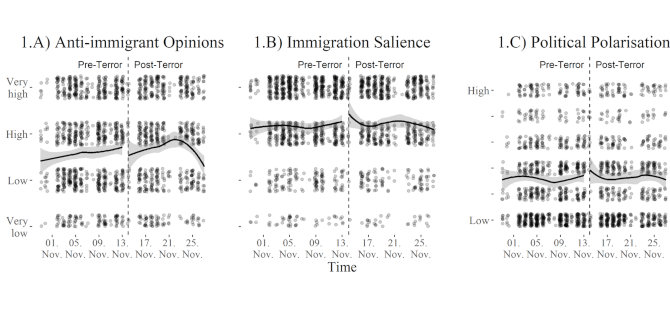