The populist radical right party Vox has emerged as a major force in Spanish politics, but what characterises the party and its voters? Drawing on a new study, José Rama, Stuart J. Turnbull-Dugarte and Andrés Santana present a comprehensive assessment of the party’s ideological makeup and the key features of its electoral base.

Since the emergence of Vox in the December 2018 Andalusian elections, at least two questions have been crucial for those interested in political parties and electoral behaviour in Spain, namely: who are Vox, and who are their voters? In a recent publication, we try to shed some light on these relevant questions by clarifying where Vox falls within the Spanish party system, and which sociodemographic, political, economic and attitudinal characteristics have led some citizens to vote for it.

To start from the very beginning, it is clear that Vox belongs to the radical right, this being self-evident in its programmatic platform. Economically, the party adopts a somewhat conventional conservative agenda that promotes market liberalism, reduced state intervention and cutbacks to the social welfare state. This is at odds with the welfare-chauvinism advocated by other members of the same party family, like France’s Rassemblement National (formerly Front National). Additionally, the party clearly advocates a defence of traditional Spanish values and of the Spanish nation vis à vis internal and external threats (secessionists and immigrants, respectively).

In this sense, nativism is clearly the main ideology of Vox. However, discursively it employs a populist rhetoric that, with allusions to pre-democratic Spain, depicts Spanish society as divided into two homogeneous and antagonistic groups: the morally just and virtuous La España viva (Spain alive) and the morally corrupt La Anti-España (Anti-Spain), which the virtuous Spain must fight against. There is little doubt that Vox perceives itself as the purest representative of the former, with the party portraying itself as the sole protector of ordinary Spanish people’s interests, the primary defender against what it terms la dictadura progre (progressive dictatorship) and the only party that promises, à la Trump, to “make Spain great again”.

Relying on expert survey data from the Global Party Survey ran by Pippa Norris, we mapped Vox’s political offering with the wider Spanish party system. As shown in Figure 1 below, it is clear that the policy supply promoted by Vox is notably distinct from that of the other four main Spanish parties: the conservative Partido Popular (Popular Party – PP), the liberal Ciudadanos (Citizens – Cs), the social-democratic Partido Socialista Obrero Español (Spanish Socialist Workers’ Party – PSOE), and the radical left Unidas Podemos (We can – UP). Across both the conventional left-right economic axis, as well as the socio-cultural (GAL-TAN) axis, the party seeks to fill the ideological space that is closest to the polar ends on the economic right-wing and conservative space. 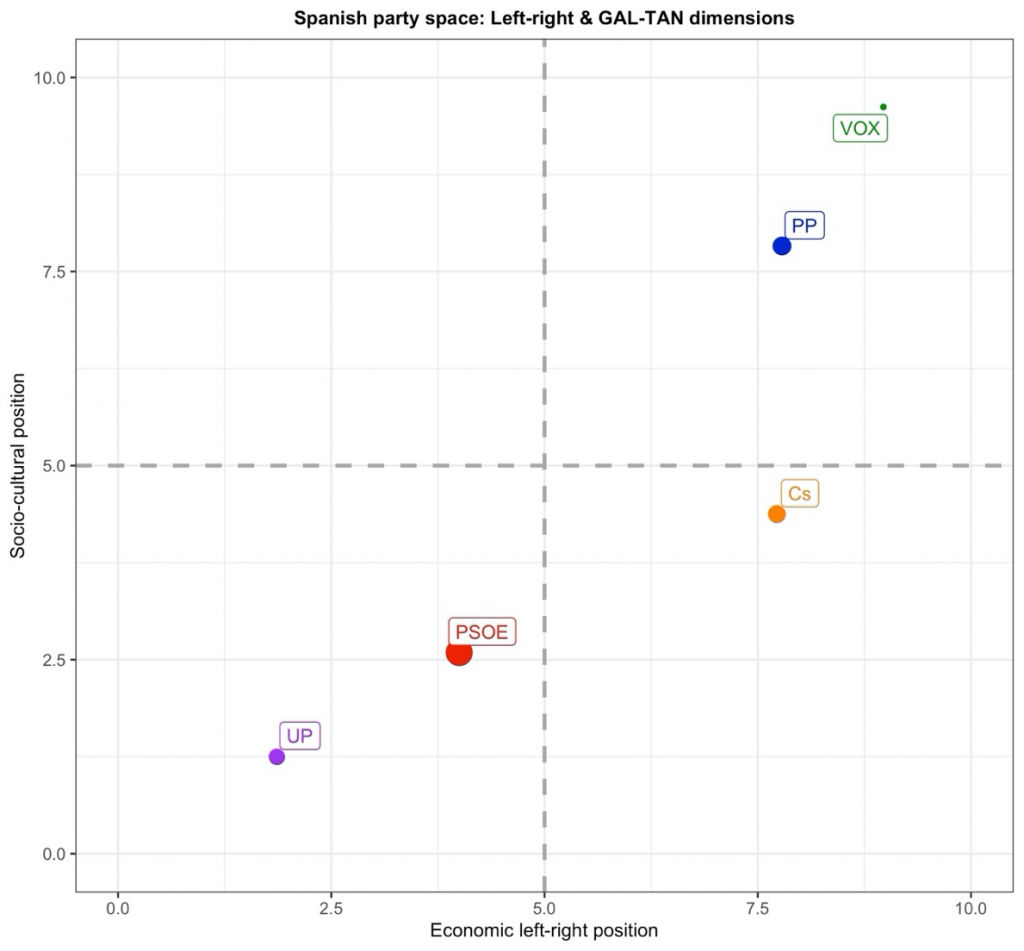 In addition to the substantive spatial gap between Vox and the other Spanish parties in the multidimensional axes of party competition, the expert respondents of the Global Party Survey also highlight the significance of populist rhetoric for the party (Figure 2). Not only is Vox more reliant on populist rhetoric than the party’s contemporaries within the Spanish party system (including Spain’s left-wing populist Unidas Podemos), but populism is also identified as a core and salient aspect for the party.

But what of VOX’s electorate? In our study, we use national level post-electoral survey data to establish what the motivations are behind voting for Vox. Our results are summarised in the table below.

Table: Factors and voting for Vox 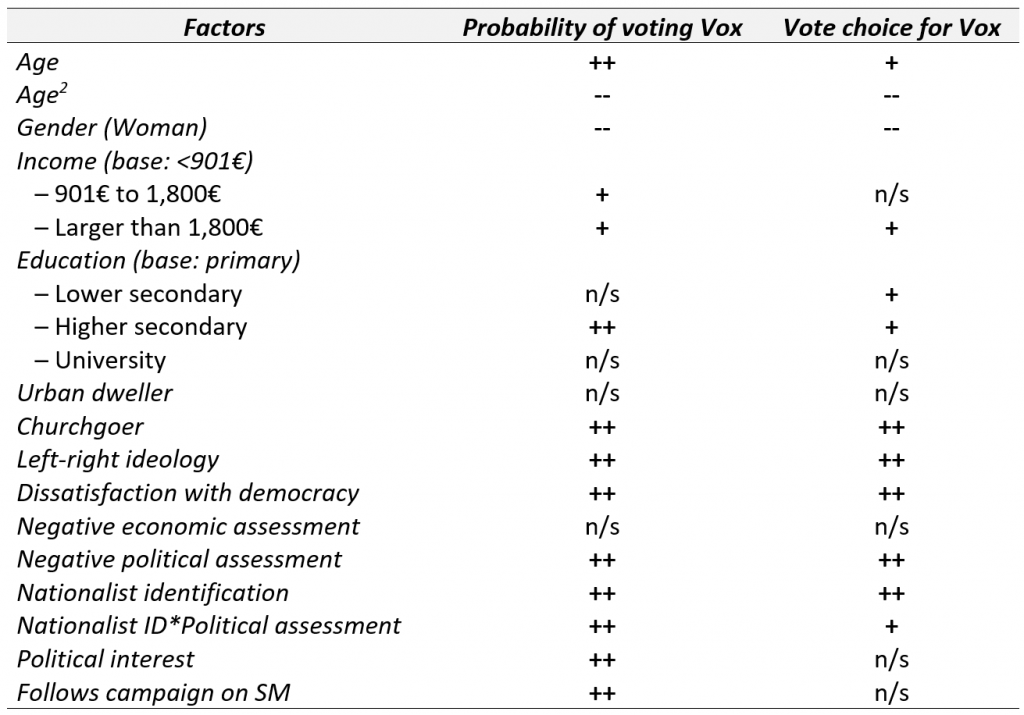 In short, our analyses find evidence that electoral support for VOX may not necessarily be reflective of the conventional support for populist radical-right wing parties observed elsewhere in Europe. Like their contemporaries in other states, Vox’s voters tend to be males who identify with the right and are unhappy with the functioning of democracy. At odds with findings amongst Spain’s neighbours, however, we find little evidence of VOX support being driven by the economically “left behind” or the “disenchanted” working class. Vox’s voters tend to come from the higher end of the income distribution, have above-average levels of education and are also relatively young.

One of the strongest predictors is an individual’s sense of national attachment with the Spanish state. In other words, those who identify strongly as Spanish are significantly more likely to vote for Vox. However, nationalist feeling is conditioned by voters’ assessments of the political situation: the significant positive association in the probability of voting for Vox is only observed amongst those who hold negative evaluations of the political situation (Figure 3). The effect is also very large (7.5 percentage-points) among those with negative evaluations, whilst for the rest of the voters the effect is indistinguishable from zero. 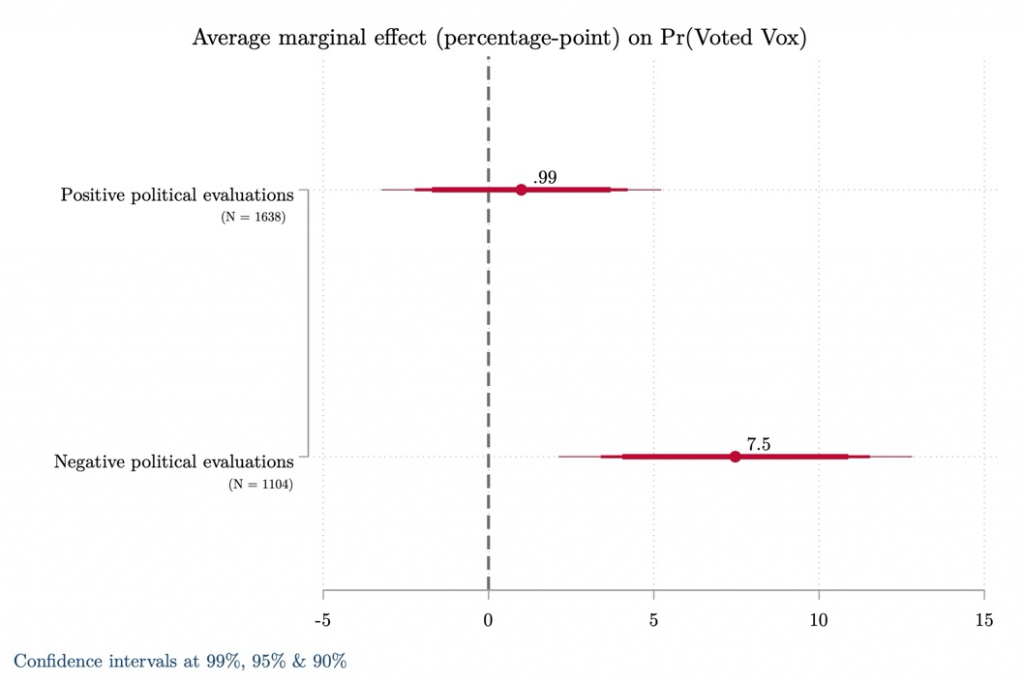 When it comes to voters casting their ballot for Vox, we find, in addition to other important predictors like increased income, education, gender (male) and ideological placement, that nationalism prevails. Vox has been able to mobilise supporters against threats to the nation by targeting the (perceived) internal threat of Catalan secessionism and the (alleged) external threat of immigration. These attempts appear to have proven fruitful: those that are both unhappy with Spain’s political direction and identify strongly with Spanish national identity make up the bulk of Vox’s electoral base.

José Rama, Stuart J. Turnbull-Dugarte and Andrés Santana (along with Lisa Zanotti) are the authors of an upcoming book, ‘VOX: The Rise of the Spanish radical right’, which will be published as part of the Routledge series on Extremism and Democracy 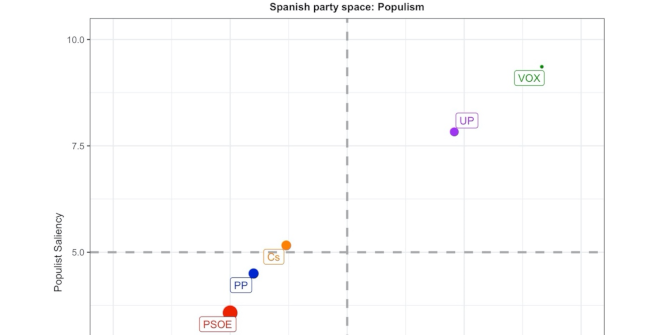 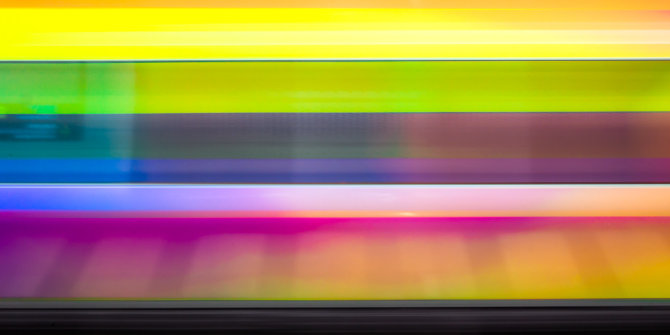