In the aftermath of the sovereign debt crisis, trade unions in the Eurozone periphery suffered heavy defeats in policy-making, as governments implemented liberalising reforms against their opposition. Some scholars saw this as indicative of a chasm in the fortunes and interests of organised labour between the Eurozone’s northern core and southern periphery. However, as Philip Rathgeb and Arianna Tassinari explain, trade unions in core countries are not insulated from the risk of marginalisation. This, they argue, underscores the necessity for labour cooperation across the Eurozone rather than a reinforcement of North-South divides.

The financial crisis of 2008 and the ensuing sovereign debt crisis that engulfed the Eurozone were asymmetric shocks with uneven consequences. Unlike the creditor countries of the northern core, peripheral Eurozone countries such as Italy, Spain, Portugal and Greece were subject to various forms of policy conditionality, mandating the implementation of deep liberalising reforms in exchange for the receipt of financial assistance from the Troika or the European Central Bank. As a result, trade unions in the periphery suffered heavy defeats when governments implemented unprecedented liberalising reforms of labour market and welfare state institutions. The uneven impacts of the Euro crisis governance reinforced a common narrative highlighting the core-periphery cleavage between the ‘North’ and ‘South’. These divisions have resurfaced acrimoniously in the recent negotiation of the EU response to the unfolding Covid-19 crisis.

Yet, in a new study, we show that the class power implications of the EU economic governance regime cut across the core-periphery divide. We develop this argument through an analysis of comparative quantitative indicators of labour market liberalisation and qualitative process-tracing of trade union influence on policymaking in three core Eurozone countries: Germany, France and Finland. Our findings show that, especially from 2015 onwards, unions of core Eurozone countries, such as France and Finland, have also lost influence over the trajectory of labour market policy when these countries experienced a deterioration of their relative competitiveness standing vis-à-vis Germany.

We attribute the demise of union influence in policy-making across the core-periphery divide to the demands posed by the Eurozone’s institutional framework to stimulate the economy through a downwards adjustment of wages and thus prices. By reinforcing the emphasis on cost competitiveness via strong wage and fiscal surveillance, the EU ‘new economic governance’ introduced in response to the Eurozone crisis puts national governments under enhanced pressure to compete against each other on wage and labour market flexibility – a process known as competitive internal devaluation.

This dynamic reinforces governments’ preferences and employers’ demands for the liberalisation of labour market institutions. Our findings demonstrate indeed that, although not exclusive to the Eurozone, the enhanced reliance on internal devaluation since the global financial crisis in 2008 has been particularly pronounced therein. By way of illustration, figures 1 and 2 show how the liberalisation of labour market policy institutions – both in employment protection legislation (EPL) and collective bargaining – has been more pronounced in the Eurozone countries when compared to other groups of advanced capitalist economies.

Figure 1: Liberalisation scores across policy areas in the Eurozone-11 and in comparator country groups 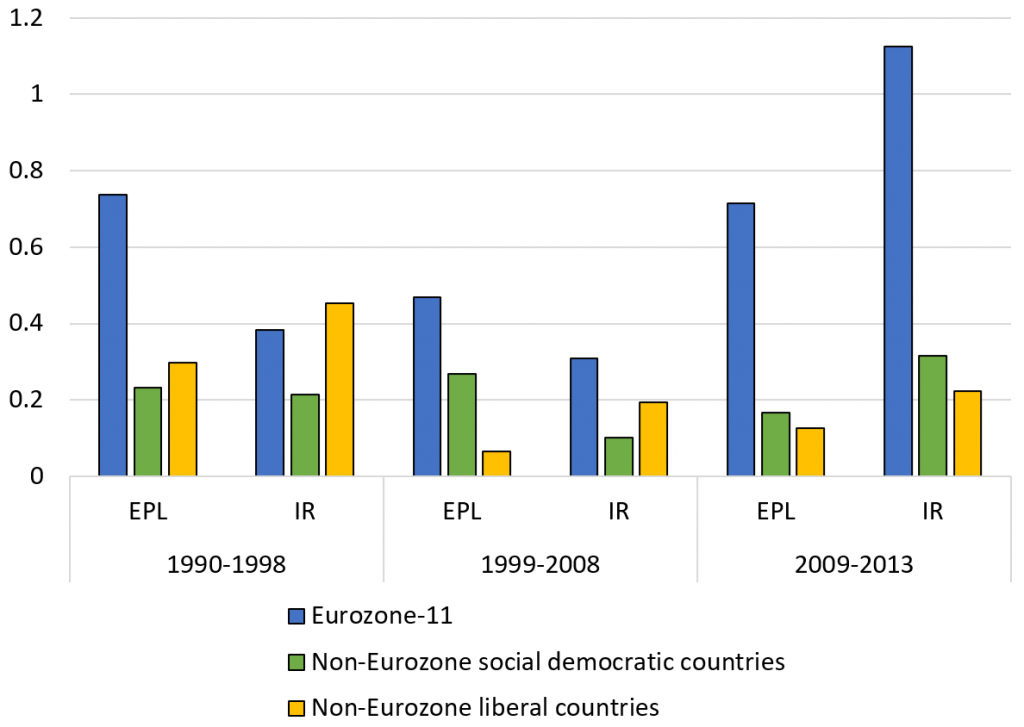 Figure 2: Determinant level of wage bargaining in the Eurozone core and periphery and in comparator country groups 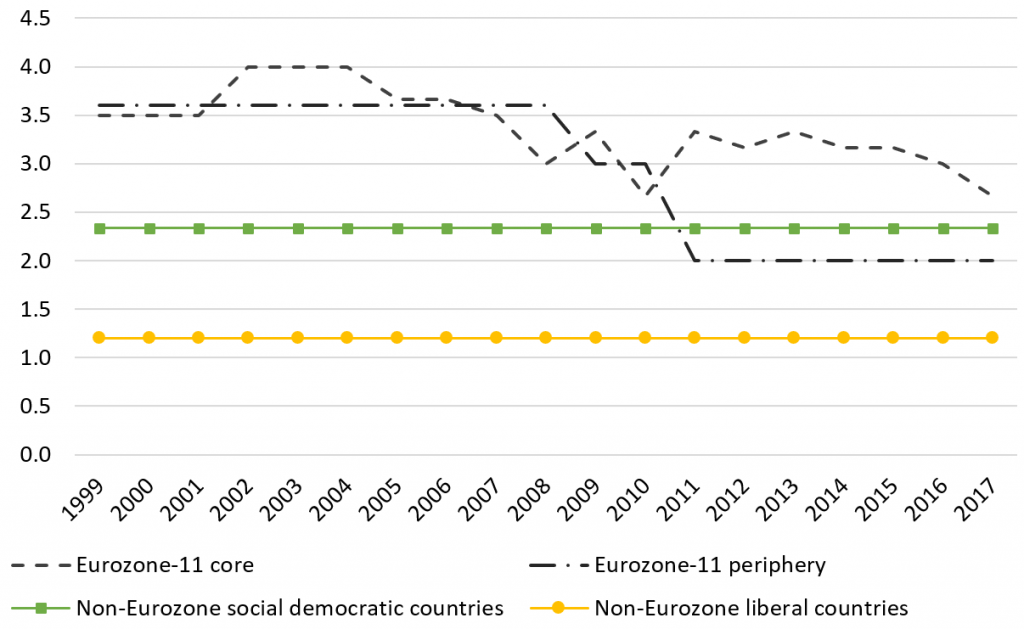 The relative standing of the German economy has been central in driving this dynamic. Given its dominant position in intra-European trade and its outstanding competitiveness standing in the wake of two decades of aggressive wage restraint, German labour costs have become the benchmark for the Eurozone’s wage surveillance mechanisms and domestic collective bargaining. Germany’s favourable competitiveness position allowed its unions to extract significant policy concessions after the Eurozone crisis (e.g. minimum wage, re-regulation of temporary contracts). However, fiscal rules and wage surveillance mechanisms in a common currency union created pressures for other countries to close down the cost competitiveness gap to Germany.

Finland is a case in point. Despite high levels of union power and corporatist traditions, it experienced reform dynamics similar to those of peripheral Eurozone countries when its macroeconomic position deteriorated in the aftermath of the Euro crisis. From 2012, flagging export performance related to the decline of the ICT and forestry sectors contributed to a deteriorating current account balance and decline in productivity growth. The recommendations issued by the European Commission framed Finland’s economic woes as a problem of competitiveness to be addressed through internal devaluation. While the cross-bloc Katainen government called the social partners to restrain wage growth relative to its main competitor countries (Germany, Sweden), the centre-right Sipilä government pursued an aggressive reduction of unit labour costs (ULCs) by threatening unilateral legislative intervention. Sustained union protests – including the first general strike in 20 years – were not sufficient to defuse this threat.

Eventually, the Finnish union confederation subscribed to a macro-concessionary bargaining agreement, the 2016 Competitiveness Pact, which involved a wage freeze, working time extensions, a shift in the liability for social security contributions from employers to employees, and a commitment to accept collective bargaining decentralisation, without any concrete policy concession in return. The words of the then Minister of Economic Affairs Olli Rehn underscore the similarities between the Finnish experience of labour defeats and that of Eurozone peripheral countries in years prior: “…Finland [is] a case in point of a Northern Eurozone country that is going through an internal devaluation in the era of a common currency – and pursuing economic reforms in the spirit of Commission’s recommendations from the years 2010– 2014”.

Keeping in mind their different starting points, the scale and depth of internal devaluation implemented in the core countries is not comparable, in absolute terms, to that which took place in the periphery. However, within their country context, what these cases have in common is that trade unions consistently lost out as a result of the competitiveness pressures politicised by the European ‘new economic governance’ framework.

In sum, our findings show that fiscal rules and wage surveillance mechanisms have adverse implications in terms of labour class power across the core-periphery divide. Core countries, which benefited in the past from current account surpluses, can also come under pressures for internal devaluation similar to those experienced by the South if their growth rates slow down and competitive advantages exhaust – and unions lose out accordingly. The French and Finnish experiences, for example, illustrate how the Eurozone interconnected the fortunes of trade unions across the core-periphery divide.

Politically, this implies that the fortunes of labour movements in Europe rest to a growing extent on their transnational cooperation against an economic governance framework that contributes to competitive internal devaluation. In a context where North-South divisions within the Eurozone are re-emerging in relation to the Covid-19 pandemic, unions would do well to recognise their common cause across the boundaries of the core and the periphery, and work together to prevent the costs of the current crisis being shifted once again onto working people. The alternative, it seems, is a Eurozone-like race to the bottom.