The Covid-19 pandemic has resulted in sweeping changes across European societies. But what has it meant for the most vulnerable? Cecilia Bruzelius and Nora Ratzmann present an assessment on the impact on marginalised groups of migrants in Germany and identify some potential long-term trends that may result from the crisis.

The Covid-19 pandemic has radically exposed inequalities, evidenced for example in differentiated access to (quality) health care, conditions for mobility and greater volatility of jobs in certain labour market segments. Moreover, the instinctive return to the ‘national’, whereby individual state governments became principal actors in fighting the virus’ spread on their national territories and resurrected hard borders, has highlighted transnational inequalities and territorially bounded solidarities. At the same time, public narratives of ‘we are all in this together’ that emerged during the height of the pandemic suggest a strengthened sense of community and perhaps also solidarities, at least within countries.

What have these contrasting responses meant for some of our societies’ least privileged groups? And how have existing social inequalities been exacerbated or appeased? In the context of an ongoing research project, we spoke to social workers and migrant counsellors in publicly funded welfare organisations (e.g. from AWO and Caritas) and local NGOs in the course of the spring and summer. The first findings from this research suggest a double dynamic. On the one hand, we have, as expected, witnessed the vulnerability of legally precarious groups increase. On the other hand, we have observed inclusive measures that extend solidarity to otherwise largely excluded groups, at least temporarily. Nevertheless, this second trend of more inclusive emergency politics appears already to be waning. 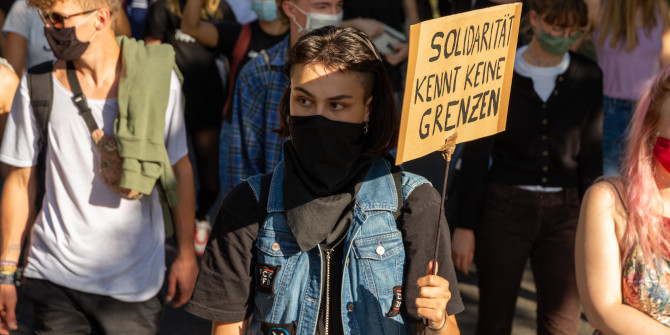 To begin with, the double dynamic has been evident in the homeless-care sector. Sleeping rough puts homeless populations at higher risk of infection and transmission, especially since some temporary accommodations, sanitary facilities and soup kitchens were temporarily closed. The latter also aggravated other problems, e.g. leaving rough sleepers with no food. Social distancing and stay-at-home orders were additionally very difficult to comply with for these groups. As the lockdown restrictions began to ease, some of these initiatives could reopen, and since then report increasing demands compared to pre-Covid times – one soup kitchen saw the number of clients double.

At the same time, Covid-19 policy responses included shifts toward universal treatment based on need rather than legal status. While migrant EU citizens with no or uncertain residence rights are often treated as second-class clients and given access to shelter only when homeless national citizens have been served, Berlin-based social workers reported that homeless migrant groups were offered temporary shelter for several weeks at a time – often in conjunction with medical care. The Senate of Berlin transformed hostels and hotels into temporary homeless shelters to increase capacity, and local initiatives started delivering donation-financed food packages to these institutions. NGOs that normally often revert to local social courts to enforce homeless EU citizens’ entitlement to housing reported much less difficulty in accessing shelter for EU clients. An increased preparedness of individuals to donate to social projects was also reported.

Similar developments have occurred with respect to accessing basic social subsistence benefits. The German government eased access to social-assistance type benefits administered by local job centres. From March to September, applicants were neither subjected to a means-test, nor were accommodation subsidies capped, with full rents covered by the state. As a result, migrant counsellors noted easier communication and cooperation with job centre officials and a shift to more lenient granting of benefits irrespective of individual circumstances. Pre-crisis, job centre caseworkers tended to question mobile EU citizens’ rightful benefit entitlement because of the nature of their work (often limited hours, flexible), which was not recognised as genuine employment. However, whether relaxed leniency made any great difference is uncertain, as the accumulated volume of claims has generated severe delays in the processing of benefit applications.

Whilst access was made easier for those in the ‘grey zone’, other categories remained categorically excluded from social assistance. The situation has not changed for those migrant EU citizens who have not been employed for at least six months in Germany or resided legally for less than five years. This raises problems for the many employed in atypical or short-term jobs who will have lost their jobs in the last months. Migrant counsellors have also noted new practices by employers, who push precarious workers into accepting redundancy payments, which makes them illegible for state unemployment benefits during the first three months.

Access to healthcare has been more worrying and there has been little indication of a move toward greater inclusion. Reports from social workers suggested a trend toward categorically containing access for vulnerable migrant groups because of overall strained resources. During lockdown, migrant populations without health insurance encountered even greater barriers to emergency health care access than before the pandemic. This includes instances of requesting documentation from the Foreign Office to get access to healthcare and passing on responsibilities from one state bureaucracy to another.

More generally, civil society organisations pointed to increased barriers to access basic social protection for the most vulnerable migrant groups. Regular outreach work by street teams was impossible during lockdown and migrant counsellors could only be contacted via telephone and email. Direct communication with local bureaucracies was similarly difficult during the shutdown. The inability to physically seek support and to bring a translator made matters even more difficult, as the few bureaucrats reachable over phone tend to communicate only in German.

Looking ahead, what will happen to these groups in the long-term? The observed shifts in practice and policy toward greater inclusion appear to be temporary responses. The ‘emergency solidarity’ responses in spring that also included marginalised groups are already being phased out. For example, a return to previous less inclusive rules for access to shelter for the homeless at the local level was reported as soon as national borders started opening up again. This would seem to suggest that the underlying policy rationales are those of public order and middle-class security, rather than humanitarian concerns of dignity and need.

Nonetheless, NGOs have pointed to a potential window of opportunity as inequalities are exposed and accentuated. Migrant workers are over-represented in sectors that are now viewed as critical to society, such as cleaning, logistics, delivery, agriculture, nursing and elderly care. Social movements like Campact have increased their lobbying efforts to revalue these professions. In fact, the German government has been discussing changes to the wage structure in the care sector, but so far only in the form of a one-off payment – which is yet to be realised.

What the crisis has shown is that there is an alternative to the political discourse focused on those who ‘deserve’ and ‘do not deserve’ support, as well as the fiscal burdens that accompany the exclusion of migrants from welfare. The temporary shift toward greater inclusiveness may have only been provisional, but it does offer a chance to reflect on the need to reform existing social systems and shows that this is possible with sufficient political will.

Note: This article gives the views of the authors, not the position of EUROPP – European Politics and Policy or the London School of Economics. Featured image credit: Sophie Seydel (CC BY 2.0)

Cecilia Bruzelius is a Junior Professor of European Public Policy at the University of Tübingen. She holds a DPhil in Social Policy from the University of Oxford. Her research focuses on social policy, migration and the EU.

Nora Ratzmann is a Research Associate at the Centre for Analysis for Social Exclusion, LSE. She recently completed her PhD at the LSE’s Department for Social Policy. She holds an MSc in Social Policy and Development from the LSE, and an MSc in Global Governance and Diplomacy from the University of Oxford.