How meaningful, reliable and useful are the comparisons being made by the media and politicians of the impact of Covid-19 on different EU member states? Linda Hantrais examines how the value of comparisons for policymaking within the EU can be improved. She argues that analysis of information about the numbers of Covid-19 cases, deaths and policy measures should take account of the reasons for variations in national and regional policy responses, and their outcomes.

The media and politicians at EU and national levels use information about the numbers of cases and deaths from Covid-19 to construct league tables and to identify best policy practice in curbing the spread and severity of the pandemic. We know that variations in reported Covid-19 death rates may be attributable to differences in surveillance systems, in the capacity to test for the virus and the reliability of tests, in medical protocols, coding practices and death certification processes. It has proved difficult to identify and record the cause of death in patients with underlying life-threatening conditions. The settings in which deaths occur – hospitals, residential care homes or the community − can also affect data availability, reliability and comparability.

In combination, under-reporting, under-diagnosis and missing cases create serious limitations for statisticians and data users. They question the value of comparisons that do not make reference to the diversity of socio-demographic, economic and political contexts within the EU, in the knowledge that there can be no one-size-fits-all EU-wide approach to policy, and that the solutions adopted in one member state may not work in another.

Public health is an area of policy where national governments have retained responsibility for making and implementing decisions. But heads of state and government are also involved in determining EU-level policy. Since the 1992 Maastricht Treaty (Article 129), the EU has had a public health mandate. EU institutions are charged with ensuring a high level of human health protection, with coordinating action between member states and cooperating with them to prevent diseases and combat cross-border threats to health.

Maastricht made explicit the EU’s remit to promote research into the causes and transmission of ‘major health scourges’. The 2007 Lisbon Treaty (Article 168) conceded that ‘Union action shall respect the responsibilities of the Member States for the definition of their health policy and for the organisation and delivery of health services and medical care’. Both Treaties deliberately excluded any harmonisation of the laws and regulations of EU member states in this area of social policy.

The EU has made many attempts over the years to achieve closer social union, but major differences persist both in the organisation and financing of national public health systems and in methods of delivery and performance. The distribution and partial sharing of competences in the area of public health have proven to be problematic in managing the Covid-19 pandemic.

National governments did not wait for directions from Europe before assuming responsibility for introducing their own more or less restrictive measures to contain the spread of the disease. They consistently flouted EU rules on state aid, free movement of goods and people across borders, public procurement, and debt limits. Progressively, the European Commission was galvanised into easing restrictive legislation. It has deployed its public health remit to monitor and coordinate the actions taken by individual member states and has sought to encourage cooperation.

By regularly collecting and collating extensive national data on public health indicators designed to inform policymaking, Eurostat, the EU’s statistical office, assists the European Commission in tracking and mapping the social situation across the EU. Although countries receive instructions for compiling information according to common definitions and standards, national statistical offices and other administrative bodies are not always able or willing to observe these requirements. They may not have access to complete datasets. Data sources and methods of collection, case definitions, recording and reporting practices vary both within and between countries. Where self-reporting is used in surveys, extra caution is required since subjective assessments are known to be influenced by socio-cultural factors.

In addition, the value of public health indicators in assessing the preparedness of member states to contain the spread of the disease and treat severe cases is compromised by the time taken by Eurostat to gather and publish harmonised datasets for all EU member states. Existing data may provide some indication of the challenges facing governments, but they are of limited value in measuring the capacity of individual countries to deal with a major health scourge.

Rather than gathering statistics about the progression of the pandemic in EU member states as a public health issue, in April Eurostat produced practical guidance for national statistical offices on the methodological issues triggered by Covid-19. Academic institutions were left to collate and publish the daily worldwide updates on Covid-19 cases, deaths and tests that are being used extensively to compare and contrast the performances of EU member states. In turn, experts from across the world are called upon to advise policymakers on the basis of their analysis of the best scientific evidence available.

As Europe rapidly became the epicentre of the pandemic, the media opportunistically ‘named and shamed’ the member states displaying the largest number of Covid-19 infections and deaths. Politicians were interested in comparing and contrasting the effectiveness of different policy measures in containing the outbreak. They wanted to know when the peak is reached, and the curve begins to flatten, before deciding whether to tighten or ease lockdown measures.

Most of these comparisons focus on absolute numbers of cases and deaths without reference to the great diversity of social and cultural environments within the EU. The resulting misrepresentation of the situation is illustrated when information about some of the key demographic characteristics (population size and density, and old-age dependency ratios) of EU member states is considered (Figure 1). Six countries count between 38 (Poland) and 83 (Germany) million inhabitants, and fifteen between 0.5 (Malta) and 9.8 (Hungary) million. Population density ranges from 18 (Finland) to over 1,500 (Malta) inhabitants per km2. Old-age dependency ratios vary between 20.7 (Luxembourg) and 35.7 (Italy).

When the cumulative numbers of Covid-19 cases and deaths reached on a given date are considered in relation to population size using Eurostat data for 2019, the expectation might be that Germany, the largest country, should display the highest figures, followed by France, the UK, Italy and Spain. Despite their smaller population size, Belgium (11.5 million) and the Netherlands (17.3 million) might be expected to register relatively large numbers of cases and deaths due to their high population density (504 and 375 inhabitants per km2 respectively). Covid-19 infections are known to be more likely to result in death among older people across the EU, particularly if they are suffering from underlying health conditions. The implication is that countries with relatively high old-age dependency ratios (Italy and Finland) would record higher rates than countries with much lower old-age dependency (Ireland and Luxembourg). 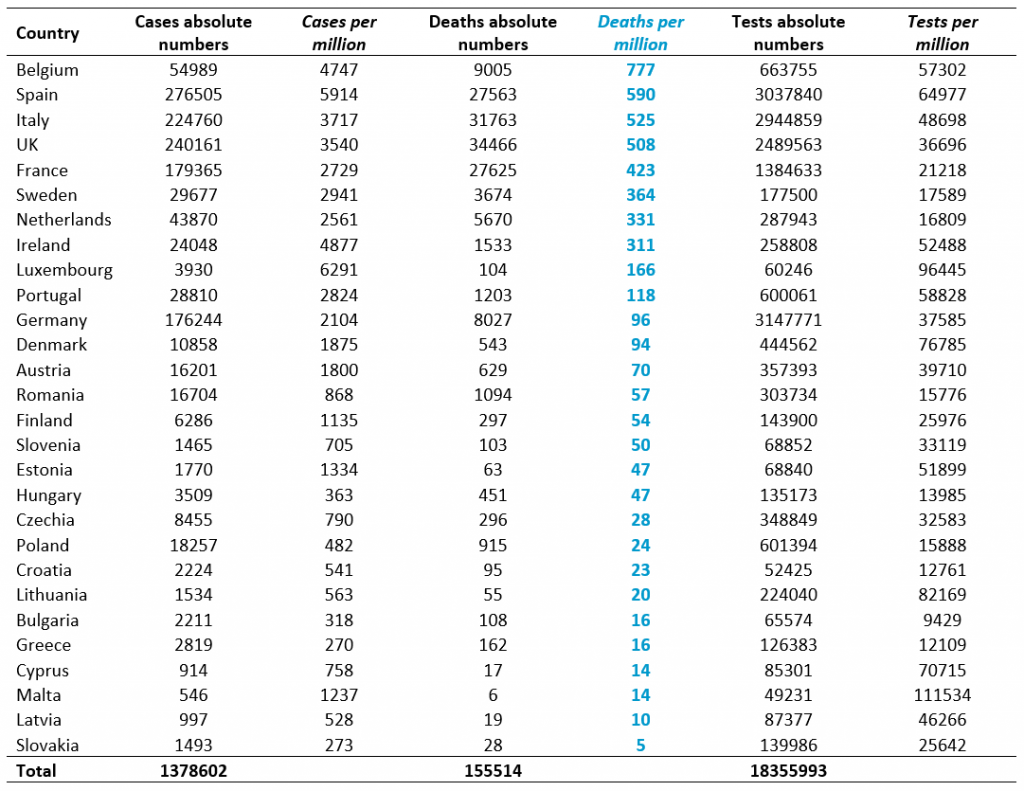 Belgium’s position at the top of the list is disproportionately high for its population density. Sweden and Ireland both display much higher Covid-19 death rates than expected for their population size and density.

Both the number of cases and deaths reported per million inhabitants are dependent on the capacity of countries to test for the virus (Table 1). None of the member states reporting relatively large numbers of deaths appears among the countries carrying out the largest numbers of tests, suggesting that many Covid-19 deaths are not being accurately attributed to the disease, and questioning the reliability of the tests.

None of these figures takes into consideration the excess deaths caused directly by Covid-19, and statisticians can only speculate about the collateral damage of the lockdown and the economic recession on the total number of deaths caused by the pandemic.

All member states are facing similar challenges. Their varied reactions to Covid-19 highlight the complexities of the task assigned to EU institutions of coordinating national public health policy responses and formulating policy recommendations that will be acceptable to all member states. The observations above challenge the validity of cross-national comparisons based on absolute figures and without reference to socio-demographic characteristics.

They do not imply that governments should stop testing for the virus. Testing is only one of the many tools available for tracking the spread of the pandemic and informing policy decisions about tightening or easing lockdown measures. Nor do they mean that comparisons and information exchange are unimportant in building the evidence base.

Comparisons are most valuable when situated not only in relation to key demographic indicators, but also to the many characteristics of national health systems: funding arrangements, levels of expenditure, provision of hospital and institutional care beds, interventions to prevent diseases and preparedness to deal with public health emergencies. Knowledge about the policy environments where governments have successfully introduced a range of measures to contain Covid-19 and devised exit strategies is essential in evaluating the transferability of public health policies, which is a primary justification for international comparisons, not least in the EU.

Linda Hantrais – Loughborough University / LSE
Linda Hantrais FAcSS is Emeritus Professor in European Social Policy in the Department of Politics and International Studies at Loughborough University; Visiting Professor at the India Observatory (STICERD) of the London School of Economics; and Chair of the UK Academy of Social Sciences’ International Advisory Group. Her publications include International Comparative Research: theory, methods and practice (Palgrave Macmillan, 2019), and What Brexit means for EU and UK Social Policy (Policy Press, 2019).