In The Case for Scottish Independence: A History of Nationalist Political Thought in Modern Scotland, Ben Jackson offers a new history of the political and theoretical debates that have provided the intellectual foundations for Scottish nationalism as a social and political movement. This is a hugely important contribution to British political history and a work that will doubtlessly become part of the canon on Scottish politics, writes Jennifer Thomson. 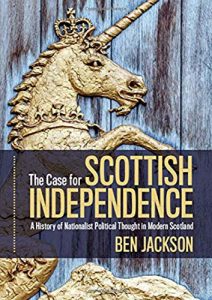 The COVID-19 pandemic has brought devolution to the forefront of British politics. The different policies that the four separate nations of the United Kingdom have adopted to fight the virus (and the differing results), and the various policy problems that it has thrown up, have acted as an almost daily reminder of the multi-level, and often competing, nature of governance across the UK. Indeed, there is a growing suggestion that the pandemic may be contributing to a strengthening of support for Scottish independence. On top of Brexit, and a ruling Conservative government at Westminster which enjoys very little support in Scotland, a global pandemic may be the final straw for the Union.

In the light of this, Ben Jackson’s The Case for Scottish Independence: A History of Nationalist Political Thought in Modern Scotland is particularly timely. It provides much-needed contextualisation to the still very recent political phenomenon that is Scottish nationalism. His book is an intellectual history of the ‘conception and theorisation’ (8) of the ideas behind Scottish nationalism. As such, this is a consciously elite study (focusing almost exclusively, as Jackson acknowledges, on the writings of men (10-11)) and speaks less to the lived reality of nationalism and its politics for ordinary Scots. As Jackson writes in the introduction, this focus is warranted given that the intellectual underpinnings of Scottish nationalism have not been given sustained academic consideration and that ‘existing accounts of Scottish nationalism have ascribed too little weight to the political ideas used by politicians, intellectuals and activists’ (6). The Case for Scottish Independence thus fills a key hole in the literature on Scottish nationalism by taking seriously the political and theoretical debates which provide the intellectual foundations for it as a social and political movement. As such, it represents a hugely important contribution to British political history, and it is a work which will doubtlessly become part of the canon on Scottish politics.

The book follows a loosely chronological structure, with the first chapter considering nationalist thinking prior to the 1960s, but the majority of the book focuses on the period from the 1960s onwards, when Scottish nationalism stepped into the political spotlight. The main structuring of the book is, however, along thematic lines, with each chapter focusing on one element of the debate around Scottish independence.

Following the introduction, the second chapter addresses the work of philosopher George Davie and arguments around the distinctive nature of the Scottish university system. Davie argued that Scottish higher education had focused on a more generalist and humanist model, as opposed to an English system which emphasised a more specific and narrow mode of study. As Jackson writes, such characterisations of Scottish intellectual and educational life as unique (and implicitly superior) to its southern counterpart ‘were only indirectly presented as arguments for Scottish independence’ (55), but nonetheless helped to create a sense that a particular and highly important aspect of Scottish culture was being eroded through the Union.

The successive chapters turn to consider imperialism and nationalism’s place on the left-right political spectrum respectively. Jackson addresses the work of political theorist Tom Nairn to survey the impact that the gradual loss of the British Empire following the Second World War, and the respective weakening of British identity, had in the nationalist imagination. He argues that there has been little serious place in nationalist thought for the idea that Scotland was ever in a ‘colonial relationship’ with England, ‘at least in the most common sense of that term’, but that the ‘loss of political autonomy after 1707 also led to some loss of cultural autonomy’ (88), leading to what Nairn referred to as ‘self-colonisation’.

The following chapter illustrates how this perceived difference has been enunciated with regards to political economy. As it outlines, the positioning of the Scottish National Party (SNP) to the left of Scottish Labour is a relatively recent phenomenon. The chapter focuses largely on the work of the ’79 group, a collective of longstanding supporters of independence, including future First Minister Alex Salmond, which was formed in the aftermath of the 1979 failed referendum on devolution. It illustrates how the development of economic policy in nationalist thinking has fluctuated in recent decades, moving from a Scandinavian model of high tax and spend to an Irish model of low corporation tax comforted through the protective cushioning of European Union (EU) membership. Jackson paints a picture of an economic policy which is distinctly less radical than the manner in which much mainstream UK coverage of Scottish politics tends to discuss Scotland’s political economy, and which sounds distinctly risky in light of the 2008 financial crisis.

The final chapter considers the issue of sovereignty and nationalism’s evolving understanding of it. Jackson addresses this largely in relation to the Constitutional Convention of the 1980s and the UK’s membership of the EU. The SNP’s strong support for the EU in recent decades sometimes appears to fly in the face of its support for independence from the other Union of which it is a member. As Jackson points out though, this pluralist approach reflects a ‘realpolitik’ – ‘as a small country, Scotland would need to find a place within international relations’ (146) and the EU would be a key part of this. As discussed above, the EU grew to represent a welcoming home in the understanding of a future independent Scotland, a community for small states which reflected a growing interest by nationalists in ‘Ireland’s successful transformation into a vibrant European economy’ (158).

Jackson’s work is an important reminder that Scottish nationalism remains a political phenomenon that has only really emerged at the forefront of the public imagination in recent decades. As such, it remains a particularly interesting development for historians and social scientists to attempt to explain. Implicit in the varied sources and thinkers that Jackson draws upon is the fact that there is no obvious enemy of the Scottish nation – no great, grand narrative of historical oppression to be told, as in the vein of Ireland. There is not even a distinctively separate identity as in the linguistic and cultural nationalism of Quebec or Catalonia (or, closer to home, Wales). As Jackson outlines, the history of nationalist thought in Scotland has been diffuse, and has at times fluctuated quite dramatically across the political spectrum, particularly with regards to its economic policy: ‘its character has been a contingent one, its rationale shifting in response to wider intellectual and social trends’ (175). The main glue for nationalist sentiment was, and remains, anger at the fundamental and profoundly negative legacy that Thatcherism had on the economy, institutions and people of Scotland.

Jackson ends on a note of caution for the SNP, pointing out that much of the debate he analyses in the book has happened outside of the confines of the party and that ‘even in the devolutionary era, Scottish nationalists remained reluctant to engage each other in spirited public debate about their political objectives’ (176). Such an admonishment seems important, especially in the context of the upcoming Holyrood elections in the spring of 2021 which, should they return a clear SNP majority, may provide the impetus for the party to argue for a second referendum from Westminster. Without a clear understanding of what the goals of independence are, and without an acknowledgement of multiple glaring failings that the party have presided over whilst in government (recent school exam results being just one), the party may fail to appeal outside of their core base. As Jackson appears to argue in closing, Scotland deserves a bigger and better debate about what it is and where it is going. A key part of this is understanding where it came from and how it has arrived at this particular point as a country –Jackson’s book is an essential component of that.

Note: This article first appeared at our sister site, LSE Review of Books. It gives the views of the authors, not the position of EUROPP – European Politics and Policy or the London School of Economics. Featured image credit: Alasdair Mckenzie (CC BY 2.0)

Jennifer Thomson is a Lecturer in Comparative Politics at the University of Bath. You can read more about her research here: https://researchportal.bath.ac.uk/en/persons/jennifer-thomson

Germany’s new anti-euro party is unlikely to be a key player in September’s Federal Elections.