The 2016 referendum that led to the UK’s exit from the European Union raised concerns that other countries may follow suit. In a recent two-wave survey experiment, Nikoleta Yordanova, Mariyana Angelova, Roni Lehrer, Moritz Osnabrügge and Sander Renes investigated what arguments could sway citizens’ support for EU membership in a hypothetical EU-exit referendum in Germany. Reminding respondents that their country may be outvoted in EU decision-making significantly increased support for leaving the EU, while other arguments had little impact. These sovereignty concerns were particularly prominent among disengaged voters, as well as those who knew little about the EU or were already predisposed against it.

The days when member state governments had their citizens’ implicit consent to act freely in Brussels are long gone. Scientific research has taught us a great deal about the individual and contextual factors that explain variation in EU support. Still, the outcome of the Brexit referendum came as a surprise to many. What can trigger the majority of a member state’s citizens to withdraw support for EU membership? Are there arguments powerful enough to sway citizens to support leaving or remaining in the EU and, if so, what are these arguments?

Politicians can choose what information to present to voters and how to do so. They can attempt to persuade voters with new information or make existing information more salient or accessible in their minds, a mechanism called framing. We expect the effect of persuasion and framing attempts to be stronger for informational messages that are not dominant in a political context, i.e. messages to which voters are less likely to have been (recently) exposed.

In a recent article on the Brexit referendum, Matthew Goodwin, Simon Hix and Mark Pickup found evidence that supports this expectation. They showed that relatively uncommon positive campaign messages about the EU had a greater potential to affect voters’ choice in the referendum than more common negative messages – this implies that the victory of the Leave side could partially be explained by the failure of the Remain side to offer an effective campaign. The opposite can be expected in Germany, where voters have mostly been exposed to positive information about European integration during the country’s long history of EU approval. German voters might therefore be more susceptible to persuasion and framing with negative rather than positive arguments about the EU.

To test this hypothesis, we set up a two-wave survey experiment within the framework of the German Internet Panel (GIP) using a representative sample of the German population of 3,000 respondents aged between 16 and 75. In the first wave in July 2016, we asked respondents to indicate how they would vote in an EU exit referendum if it took place the following Sunday. We then asked the same question again in March 2017 after having divided respondents randomly into 9 groups and exposed 8 of these groups to a single argument each, either for or against EU membership; the ninth group served as a control.

Figure 1 summarises how the share of remainers, leavers, and undecided respondents changed in all groups between the two waves. The changes in the control group, where the share of remainers increased from 81.7% to 85.4% over time, revealed a trend toward increased support for staying. Against this trend, in the group that received a negative political sovereignty argument (reminding respondents that their country can be outvoted in the EU), the share of remainers decreased from 85.4% to 81.0%. Hence, the overall effect of the negative political argument was equal to an 8.1 percentage point decrease in support for remaining in the EU.

Figure 1: Changes in the share of remainers, leavers and unsure voters between the two survey waves across treatment and control groups 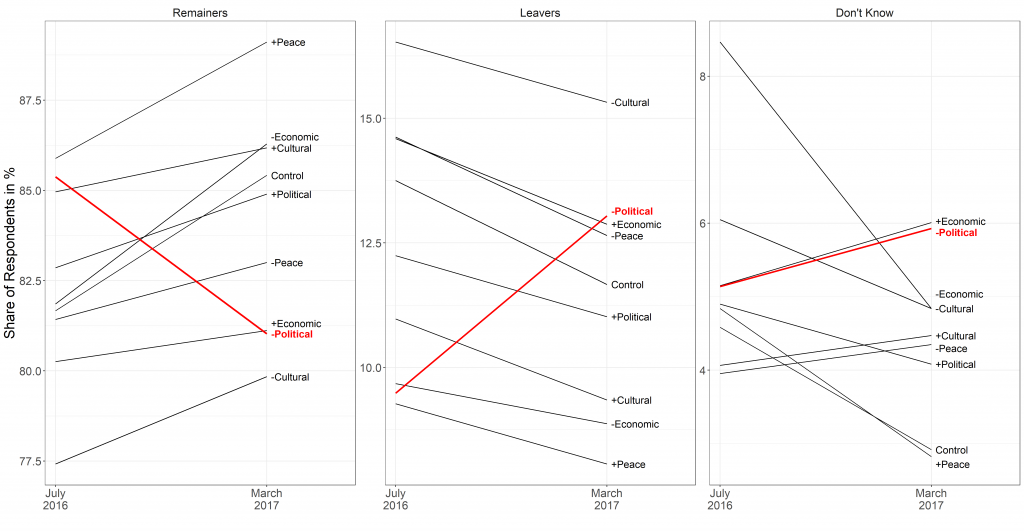 This difference-in-differences effect is statistically significant as our regression analyses confirm. When comparing the average change in intention to vote remain in an EU-exit referendum between the two waves, only the group that received the negative political argument differed significantly from the control group, exhibiting lower support for remaining in the EU (see Figure 2). None of the other negative or positive arguments had a significant effect on the citizens’ attitudes.

Figure 2: Predicted change in support for remaining in the EU between the two waves in groups treated with a negative argument versus the control group

The effect of the negative political argument on sovereignty is remarkably large given the affected group received only one short argument. Moreover, we asked respondents to choose between two options of their country leaving or remaining in the EU, which presents an important and extreme decision. We therefore expect that the effect would have been even stronger if we had instead asked respondents about their general EU attitudes, such as support for further integration. We also find that the negative political argument had the strongest effect among politically disengaged citizens and those with little knowledge about the EU, as well as those with strong anti-EU attitudes. This supports expectations that people are more likely to respond to information that reinforces their prior beliefs (confirmation bias).

Our results have important implications for current debates on the future of the EU. This includes proposals to extend the use of qualified majority voting to sensitive areas such as foreign policy to prevent single country vetoes, such as the recent Cypriot opposition to sanctions against the Belarusian authorities. While member states have long lost their veto power over issues related to the single market, unanimity is still required to decide on more controversial issues such as taxation, trade agreements and foreign policy.

Moving away from consensual decisions on such issues would exacerbate sovereignty concerns. As our research suggests, this can increase public support for leaving the Union even in a country with a generally pro-integrationist position and substantial weight in the EU. The implications could be worse in Eurosceptic member states with weaker standing in the EU, who are more likely to find themselves on the losing side in EU decisions taken by a qualified majority vote. To preserve unity and prevent further EU exits, policymakers should thus take heed of citizens’ sovereignty concerns.

Nikoleta Yordanova is an Assistant Professor in European Politics at Leiden University.

Mariyana Angelova is an Assistant Professor in Comparative Politics at Central European University.

Roni Lehrer is a Post-doctoral Fellow at the Mannheim Centre for European Social Research at the University of Mannheim.

Moritz Osnabrügge is an Assistant Professor at Durham University.

Sander Renes is an Assistant Professor at Erasmus University Rotterdam.