Decision-making in the Council of the European Union has long been characterised by a depoliticised consensus culture. Yet, as Brigitte Pircher explains, this has changed in the wake of multiple crises and increased politicisation of the integration process. Drawing on a new study, she illustrates how different facets of politicisation are uploaded from the member states to the EU level and subsequently affect governments’ voting behaviour in the Council.

The EU has been challenged and transformed by multiple crises throughout the last decade. First, member states have been asymmetrically exposed to economic stress, which has increased economic tensions and disparities among the member states. Second, the crises have enhanced politicisation in the member states, which places pressure on governments to adjust their policy positions at the EU level.

Scholars have previously identified geographical, ideological, and economic factors as pivotal drivers for governments’ position taking and voting in the Council of the European Union. A general assumption in many of these studies is that governments in the Council act largely insulated from domestic party politics and electoral pressure.

However, as these studies focus on the pre-Lisbon period, they do not account for the impact of the multiple crises that have occurred since – the financial, economic, Eurozone and asylum crises – or the increased politicisation of EU policymaking. In a new study co-authored with Mike Farjam, we focus on Council voting during the post-Lisbon era and take these recent political developments into account to explain governments’ voting behaviour.

Politicisation can be conceptualised as a multi-faceted process where an issue (European integration) grows in saliency, while actors’ positions on this issue become increasingly polarised. Previous studies ascertained that Council voting reflects governments’ responsiveness to their domestic electorate. Therefore, we theorise that the growing Euroscepticism in the EU’s member states – which is either directly expressed by public opinion or channelled through political parties – is also key to understanding how governments vote in the Council.

We further argue that the left-right positions of national parties – both in government or opposition – as well as the growing polarisation between parties, such as increased party system fragmentation, shape Council voting. Moreover, we suggest that the effects of politicisation on voting in the Council are more pronounced in policy areas that were especially challenged by the recent crises – that is, in policy areas pertaining to economic and financial affairs, the internal market, and justice and home affairs.

We combine a new dataset comprising all member states’ votes on legislative acts in the Council between 2010 and 2019 with national-level data. To test the hypotheses, we use mixed-effect logistic regression and model government voting behaviour as a function of, among other things, party system fragmentation within the parliament, Euroscepticism separately for national governments and parliamentary oppositions, and a left-right wing positional score (RILE and RILE square), also separately for government and opposition. While RILE and Euroscepticism are based on the Manifesto Project Dataset (CPM), the variable party system fragmentation is based on the Comparative Political Data Set (CPDS).

Oppositional voting in the Council of the EU post-Lisbon

We find that 36% of all legislative acts were contested by at least one member state after Lisbon, which is a stark increase compared to previous studies. Most contestation occurred in relation to the environment and in our ‘others’ category. This was followed by the internal market; transport, telecommunications and energy; agriculture and fisheries; and, justice and home affairs. We observe the lowest level of contestation in economic and financial affairs. The United Kingdom was by far the member state that most often expressed opposition (votes against and abstentions) in all policy areas except for the environment, where oppositional voting primarily stemmed from Bulgaria, Hungary, and Poland.

Table 1: Opposition and contestation in the most frequently contested policy areas

In our cluster analysis, shown in Figure 1 below, we found a stable cluster of countries that most frequently opposed together in the Council, including the UK, Ireland, and Denmark. While Germany’s oppositional voting was relatively independent of other countries before 2015, it tended to align with the Netherlands, Belgium, and Austria from 2015 onwards. Lastly, and most importantly, after the 2015 refugee crisis, a new cluster of oppositional votes developed among the Visegrád Group.

Figure 1: Clusters of oppositional voting in the Council of the European Union 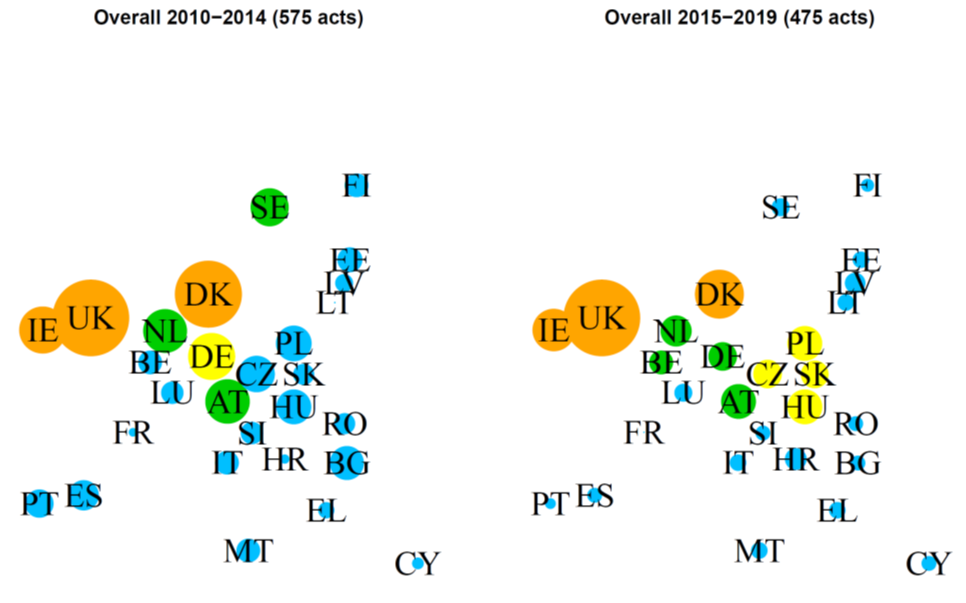 Note: Clusters are coded in colours. Countries’ positions in the figure correspond to their geo-centroids. The size of the circle surrounding a country indicates the frequency with which it opposed in the Council. Clusters were computed through a hierarchical cluster analysis.

The impact of politicisation on Council voting

We find that domestic national party politics, either directly driven by governments or indirectly channelled through opposition parties, substantially affects voting in the Council. While governments generally became more Eurosceptic in the post-Lisbon era, the impact of this on oppositional voting is only apparent in agriculture and fisheries, economic and financial affairs, and the internal market.

Voting in the Council is, further, primarily driven by government and opposition parties with a centrist position on the left-right scale. This is plausibly traced back to the fact that the main opposers of the EU, radical right parties, tend to take a centrist position on economic issues. The position of governments on the left-right dimension only predicts voting in economic and financial affairs and the internal market. In contrast, opposition parties’ left-right positioning predicts voting in agriculture and fisheries; transport, telecommunications and energy; and our ‘others’ category. We, therefore, again find evidence that governments adjust their positions in the Council as a response to their national opposition.

Overall, governments are the main driver for position-taking at the EU level in the areas of economic and financial affairs and the internal market, whereas all other policy areas (except for agriculture and fisheries) are left to the national opposition and indirectly impact governments’ voting. Taken together, we find strong evidence for differentiated politicisation where ideological standpoints of political parties in government and opposition differently affect voting in the various policy areas. This may result in increased differentiated integration. Further research should, therefore, address the question of how EU politicisation transforms domestic political conflicts and how these conflicts are integrated into EU policy-making. 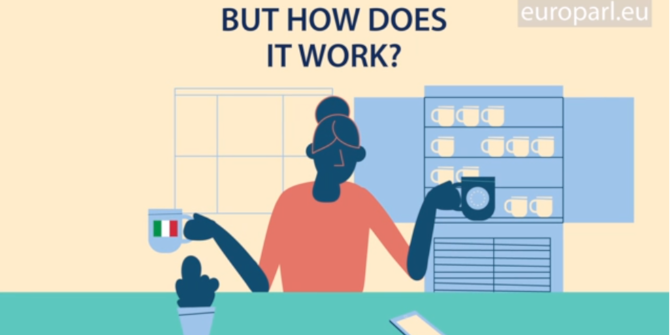