Solidarity towards other European countries and citizens became a polarising political topic in the aftermath of the financial and migration crises, but what impact does the issue have on elections? Drawing on new research, Alessandro Pellegata and Francesco Visconti explain that voters who have preferences for more European solidarity are more likely to support green, social-democratic and radical-left parties, and less likely to back moderate and radical-right parties.

For a long time, scholars interpreted European elections as ‘second-order elections’ that voters perceive as less relevant contests and use to punish or reward governing parties. However, the increase in turnout and the substantial gains for parties with clear-cut stances on the European Union – such as the greens and the liberals – in the 2019 European Parliament elections suggest that EU-related issues are becoming increasingly relevant in structuring electoral competition at the EU level.

The aggregate scenario still does not help us in understanding whether voters’ attitudes towards the EU play a role in shaping their party choices. In a recent study, we investigated whether voters’ attitudes towards the policy-making role of the EU helped explain their voting behaviour in the last European elections based on data taken from an original survey conducted in ten EU member states in the framework of the REScEU project.

Given the unprecedented number of complex challenges that hit the EU after 2008, to fully understand the nature of EU issue voting it is necessary to consider not only whether voters and parties stand for a more (or less) integrated EU, but also ‘what kind’ of integration they support. The Great Recession, the Eurozone crisis, the refugee crisis and eventually the Covid-19 pandemic forced EU institutions to introduce policy schemes to help member states cope with the social and economic consequences of these shocks.

These new policies exacerbated a longstanding but latent political conflict over the aim of European integration, polarising political actors standing for an ‘economic’ integration that prioritises fiscal stability and the competitiveness of the common market and those advocating for a ‘social Europe’ that corrects the imbalances of the market and ensures a high level of social protection to European citizens. In the end, the political conflict over whether the burden of the multiple crises should be shared among member states and citizens reflects different views on the principles and ideas of solidarity that the EU should embody.

European solidarity is defined as the individual willingness to share risks and obligations across the EU. The salience of European solidarity in the manifestos of European party groups grew in the 2019 election campaign compared to previous elections. Parties’ stances on this issue are mostly aligned along the traditional left-right axis.

Overall, left-wing parties tend to express greater support for EU-level policies strengthening the redistribution of risks among EU member states and citizens than their right-wing counterparts. Therefore, we hypothesised that voters with positive preferences for European solidarity are more likely to vote for green and radical-left parties, while they are less likely to vote for both moderate and radical-right parties. The European Greens openly campaigned for more integration during the 2019 elections, even in policy areas not explicitly encompassed by EU policy making, while radical-left anti-austerity movements advocated for EU-level policies aimed at protecting European citizens from unemployment and poverty.

On the other side, Eurosceptic radical-right parties tend to reject the EU project as such, while moderate right-wing parties, in particular those belonging to the European People’s Party (EPP), support a ‘market-making’ view of EU integration and were the main sponsors of austerity policies during the Eurozone crisis. We remained agnostic about a potential association between European solidarity preferences and support for the Socialists & Democrats (S&D) because they often appeared internally divided, with Northern European parties reluctant to support mechanisms that would share liabilities among EU member states.

We disentangled the concept of European solidarity across three analytical dimensions. Cross-national solidarity refers to obligations and risk sharing among EU member states through a logic of redistribution from the richest to less-developed countries. Interpersonal solidarity points to EU-level redistribution mechanisms targeting needy European citizens, irrespective of their country of origin or residence. Finally, European social citizenship refers to European citizens’ right to exercise the free movement principle and entitlement to cross-border welfare rights. We estimated voters’ positions on these three dimensions through a survey conducted in ten EU countries just after the 2019 European Parliament elections: Finland, France, Germany, Greece, Hungary, Italy, the Netherlands, Poland, Spain and Sweden.

We conducted the empirical analyses by both aggregating the single parties that contested the elections in the political groups in the European Parliament to which they belong and in each single sample country. Figure 1 displays whether increasing levels of public support for the three dimensions of European solidarity are associated with a higher (above the ‘0’ line) or a lower (below the ‘0’ line) probability of voting for European parties.

Figure 1: Effect of European solidarity on likelihood of voting for a party 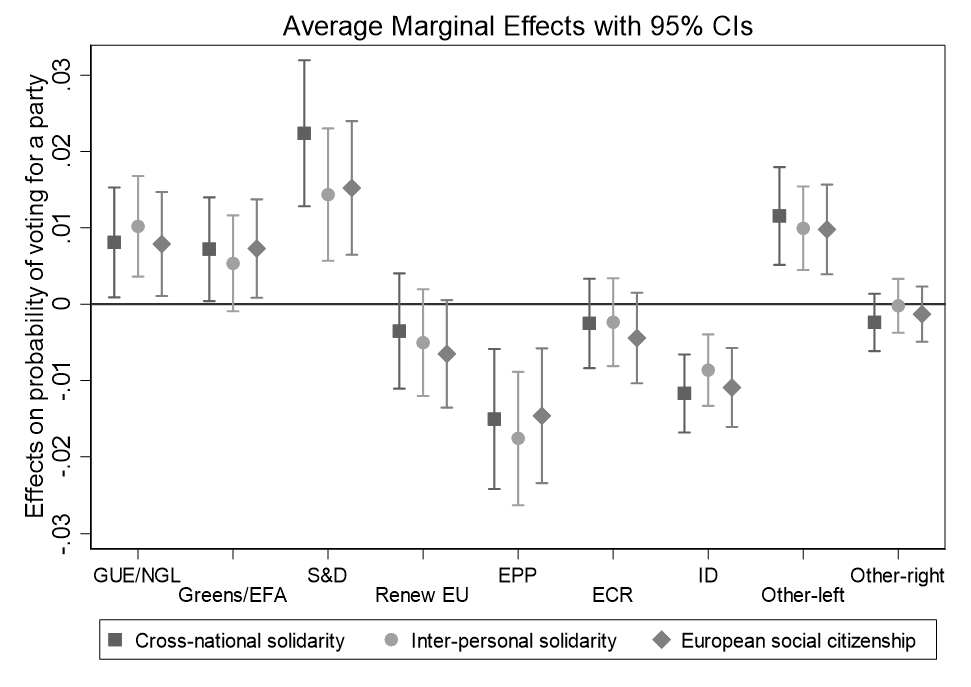 Overall, the findings confirm our expectations. Pro-solidarity voters are more likely to vote for green parties and radical-left parties that are either non-affiliated or belonging to the Greens/EFA or European United Left/Nordic Green Left (GUE/NGL) groups. In contrast, they are less likely to vote for parties affiliated to the EPP group or the Identity and Democracy (ID) group, which is the most Eurosceptic in the European Parliament and which includes parties with radical-right stances.

The results show that parties belonging to the S&D group benefited the most from solidarity-voting in the most recent European election. Finally, we did not detect any significant association between public support for European solidarity and voting for parties in the Renew Europe or European Conservatives and Reformists (ECR) groups, or radical-right parties not affiliated with any group.

Country-level analyses show differences in the association between voters’ attitudes towards European solidarity and their party choices. Considering the contrasting electoral competition dynamics that characterise contestation over European integration in Northern and Southern Europe, respectively, we found a positive association between public support for European solidarity and voting for green parties only in Germany and the Netherlands.

In France, Italy, and Spain – but not in Greece – pro-solidarity voters are instead more likely to vote for radical-left parties or their functional equivalents like the Five Star Movement. Empirical results concerning the negative association between public attitudes towards solidarity and voting for right-wing parties are more straightforward. In all sample countries except Hungary, those who support European solidarity are less likely to vote for moderate and/or radical-right parties.

In sum, our study shows that following the multiple crises that have hit Europe since 2008, scholars should focus not only on general support for the EU but also on voters’ preferences for EU-level policies, such as those aimed at strengthening European solidarity, to fully understand the relevance of EU issue voting. Furthermore, it is necessary to unpack party choices to investigate how voters’ policy preferences polarise their choices for different pro-EU parties.

Alessandro Pellegata is an Assistant Professor of Political Science in the Department of Social and Political Sciences at the University of Milan and member of the editorial board of EuVisions, an online observatory on social Europe (http://www.euvisions.eu/). His main research interests are in the field of comparative institutional analysis and comparative public opinion. He has published articles in several academic journals, such as European Union Politics, Journal of European Public Policy and West European Politics. 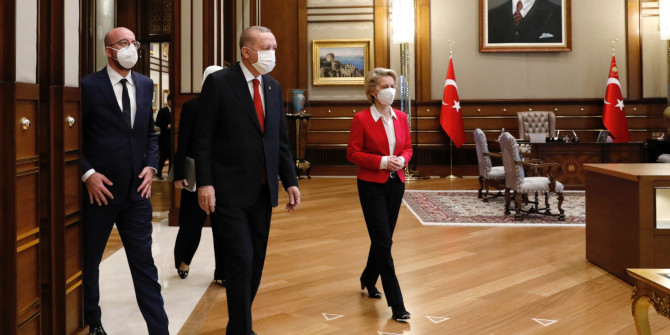 What a new refugee crisis would mean for Turkish politics 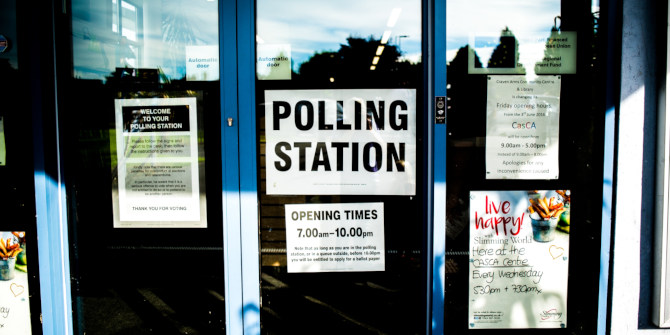