The UK has over 10 million confirmed cases and more than 145,000 deaths, making it one of the most affected countries by the Covid-19 pandemic. Similar to other governments across the world, the UK had initially attempted to contain Covid-19 with a national lockdown.

These measures have been found to be effective at reducing transmission, but vaccination is now the safest and most effective way of containing the pandemic while keeping the economy open. Recently, the UK’s Prime Minister, Boris Johnson, announced a new focus on providing ‘booster vaccines’ to as many people as possible before the end of the year.

Yet, over 20% of the population is not yet fully vaccinated and there is substantial variation across the country. It is therefore crucial to understand the drivers of this variation: partly to ensure that places where two doses have not been sufficiently administered can receive the attention they require; partly to ensure that existing gaps do not get reproduced with the booster vaccine.

Partisan polarisation: what effect on vaccination?

One noteworthy potential source of variation concerns partisan affiliation which maps onto other ideological and material cleavages. Political science literature has long documented increased partisan polarisation with voters of different political parties thinking and behaving differently. However, we still know comparatively less about whether and how public health responses may be undermined by partisan divides. While there is emerging evidence on how partisanship may have influenced individuals’ perceptions of the pandemic and national lockdowns, less is known about how partisanship affects vaccination.

If vaccination rates interact strongly with pre-existing party preference divisions in societies, this might undermine the ability of governments to effectively address the pandemic: certain voters may hold systematically distinct beliefs making them reluctant to be vaccinated, precisely at a time when concerted and decisive collective action is most needed. As a result, there is a risk that partisanship undermines our public health response to Covid-19, by making certain individuals sceptical of the need to get vaccinated or worried about the risks of doing so. 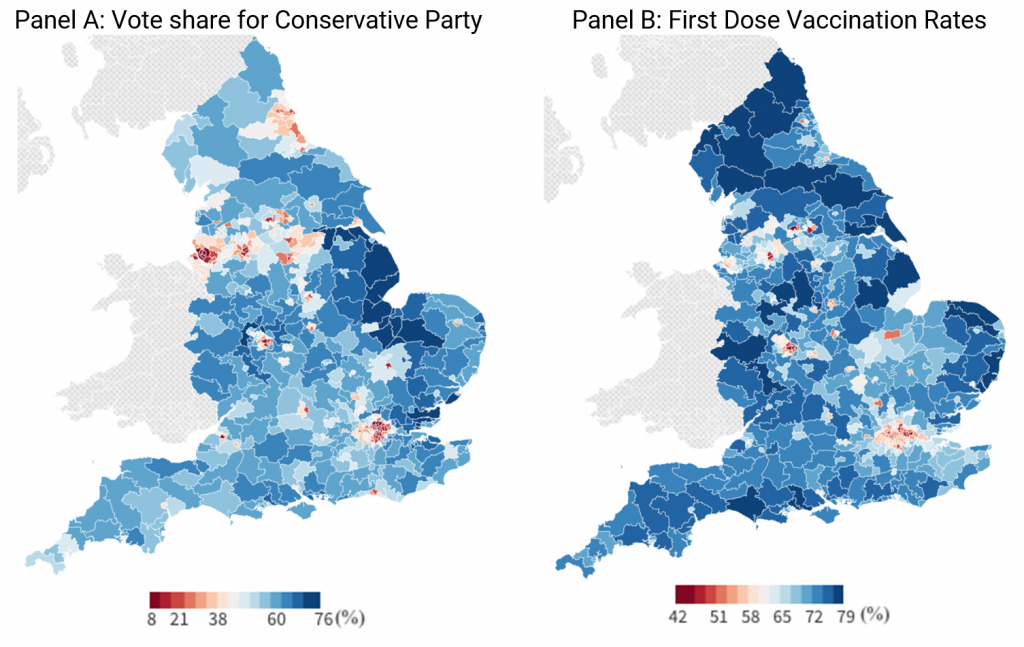 Note: This figure shows the vote share (left hand side) and vaccination rate (right hand side), both expressed as percentage points, in different English constituencies. Vaccination rates were calculated by dividing the number of first doses in a constituency by the total population over 18 years old of that constituency and then multiplying this ratio by 100. 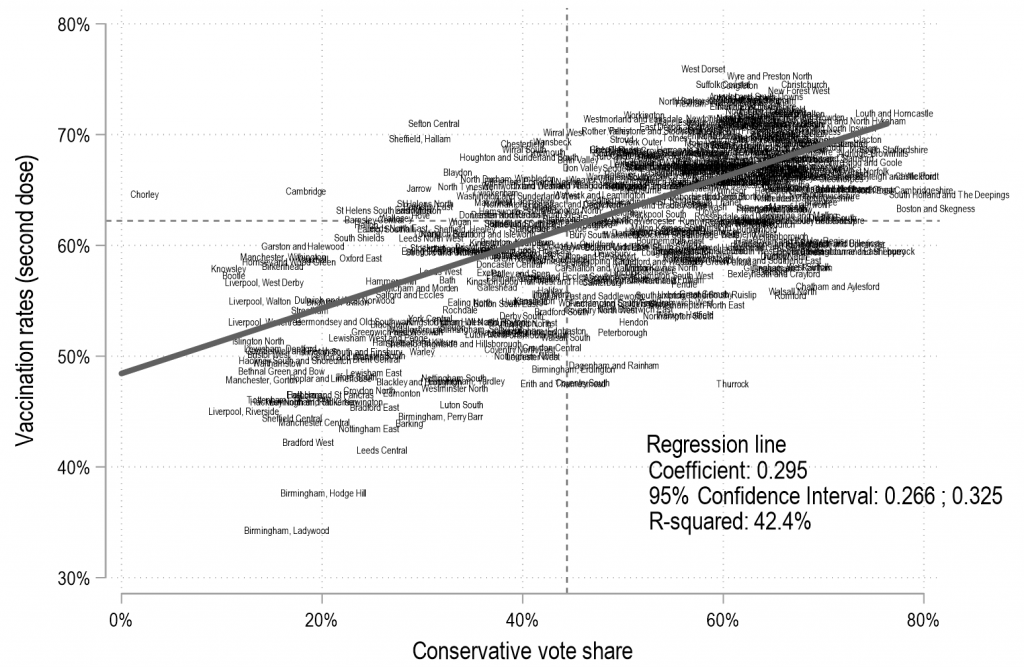 The second dataset is a survey carried out by YouGov comprising five waves collected weekly between October and early November 2021. Each wave has between 1,648 and 1,729 respondents and the survey includes variables about past votes in the 2019 general election, how respondents voted in the Brexit referendum, age, number of children, gender, social class, and region location. Controlling for all these confounding effects, we still find that Conservative voters are more likely to be vaccinated than their Labour counterparts.

Our findings point to the importance of partisanship in understanding the patterns in vaccination rates across England. Conservative voters and those who live in Conservative constituencies both appear more likely to be vaccinated. How much of this gap is due to material, rather than ideological, differences? We find that at the constituency and individual level a large part of the differences between Conservative and Labour is absorbed by socio-demographic and economic differences between the two groups. We interpret the remaining statistically significant difference as evidence of some ideological differences but can only speculate about its sources: one possibility is that Labour voters are more likely to distrust the Conservative government; another is a differential vaccine availability or ease of access to Labour voters.

Regardless of its source, the direction of the partisan effect contrasts markedly with recent studies about attitudes towards Covid-19, as well as with the US case, where Republicans are less likely to follow social distancing rules, wear masks and to get vaccinated than Democrats. Thus, the UK government seems to be more effective at convincing people in Conservative constituencies to get vaccinated. But paradoxically, it now faces the reverse problem: in the US, the Democrat led government must convince Republicans to get vaccinated, whereas the UK Conservative government will now need to improve vaccination rates in Labour constituencies and among Labour voters.

Note: This article gives the views of the authors, not the position of EUROPP – European Politics and Policy or the London School of Economics. Featured image credit: Simon Dawson / No 10 Downing Street (CC BY-NC-ND 2.0)

Margaryta Klymak is a Fellow and Tutor in Economics at Somerville College, University of Oxford. 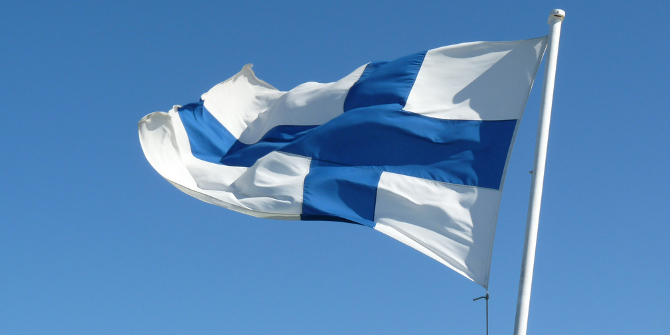