Previous studies have found substantial support across Europe for the creation of a universal basic income system. Yet as Matthias Diermeier and Judith Niehues explain, there is also widespread support for restricting the access of immigrants to state benefits. Drawing on new research, they assess how these two perspectives shape wider attitudes toward welfare.

Several European countries that operate substantial welfare states have admitted large numbers of immigrants over recent decades. This has resulted in a significant increase in diversity. In Germany and Sweden, for instance, the share of the population that is foreign-born has risen to 16 per cent and 20 per cent, respectively.

These trends have caught the attention of academics. In a new book, the political scientist Yascha Mounk retraces the evolution of ‘diverse’ democracies, dubbing the ongoing ethnic heterogenisation of western democracies ‘the great experiment’. The transition from monocultural societies to multi-ethnic ones, he argues, bears significant risks for social cohesion and the degree of democratic inclusiveness.

At the political level, there has been a prominent anti-immigration backlash stemming from the rise of the populist radical right in most mature democracies. The influence that nativist parties have developed has not only left its mark on immigration policies but has also triggered discussions over the future of the welfare state and whether immigrants should have full access to benefits.

The most universal of all welfare programmes is the universal basic income (UBI). The policy, which involves paying all individuals in society a set salary regardless of their circumstances, has substantial support across Europe. European Social Survey data indicates support ranges from 70 per cent in Hungary to 38 per cent in Sweden.

At first glance, this seems to confirm the principle that universal redistribution enjoys popular support, particularly among those who endorse progressive values and place themselves on the economic left. However, as we show in a recent study, when we look at this support in more detail, it becomes apparent that all over Europe supporters of a universal basic income demand rather strict eligibility conditions for immigrants.

As Figure 1 below shows, fewer than seven percent of universal basic income supporters in Hungary would grant immigrants welfare access even after they have lived in the country for a year. Half of German basic income supporters would demand that immigrants have worked and paid taxes for a year before they are given access to benefits, while nearly a quarter would restrict eligibility to naturalised citizens.

Figure 1: Welfare conditioning among supporters of a universal basic income 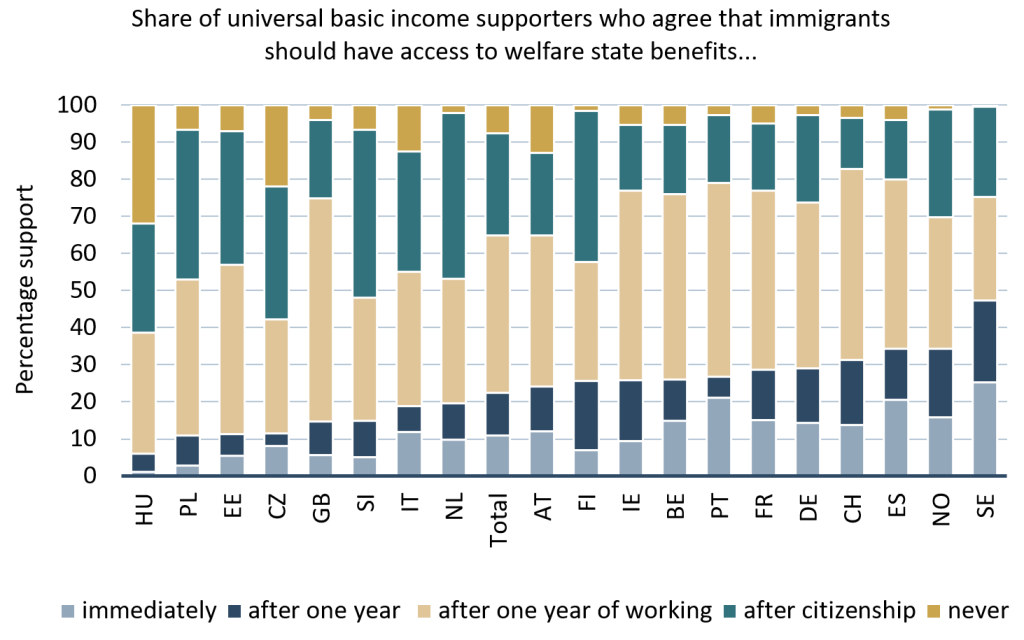 These findings are strongly suggestive of welfare chauvinism: the preference to limit redistribution to a specific in-group, in this case defined by nationality. Furthermore, a large group of those who support (universal) welfare in Europe want to make sure that immigrants have ‘earned’ their share before they are allowed to access welfare. This is particularly the case for people who generally do not hold anti-immigration sentiments but endorse meritocratic values.

The findings add another perspective to our understanding of support for welfare programmes in diverse societies. Policies like a universal basic income do appear to be more popular than increasing targeted spending for vulnerable groups like immigrants. But even supporters of a universal basic income are prone to welfare chauvinism. As a consequence, populist radical right actors no longer tend to position themselves as opponents of welfare programmes, but rather as advocates for redistribution for their native ‘in-group’, pushing for policies that directly or indirectly exclude the non-native population.

Welfare programmes that are open to a larger share of the population, like pension schemes, are more popular than programmes targeted at particular groups such as unemployment insurance, given people are often held responsible for being unemployed. This is known as the ‘welfare deservingness hierarchy’. In another recent study, we disentangle different layers of welfare chauvinism to show how discriminatory welfare preferences have the power to amplify this ‘deservingness hierarchy’. 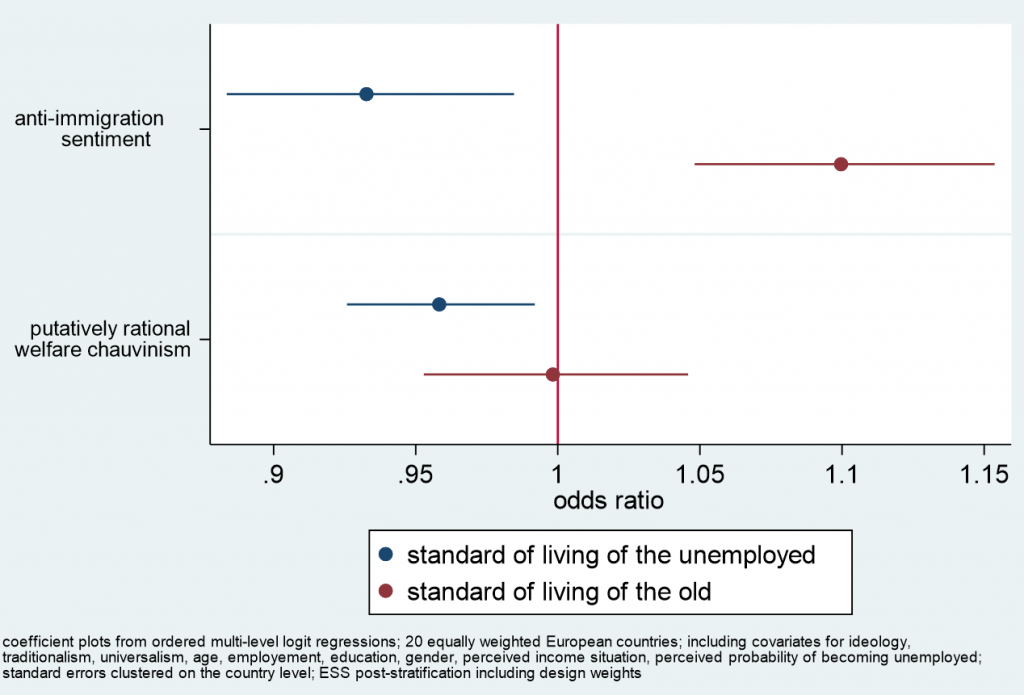 Note: The figure shows support for the principle that governments should have a responsibility to protect the standard of living of the unemployed and the standard of living of old people. The lines indicate confidence intervals. Lines located entirely to the left of the vertical line indicate there is a negative impact on support. Lines located entirely to the right of the vertical line indicate a positive impact on support. Source: European Social Survey Round 8, ESS (2016)

As the figure shows, welfare for the unemployed is put at risk by both anti-immigration sentiment and ‘putatively rational welfare chauvinism’. In both cases, the lines are entirely to the left of the vertical line, indicating odds ratios that are statistically significant below 1. In other words, there is reason to believe that a grand coalition of people holding anti-immigration sentiments or a ‘putatively rational’ approach to the welfare state oppose government intervention to protect the unemployed.

In contrast, state interventions to secure the standard of living of the elderly turn out to be more popular among people who hold anti-immigration sentiment and more specifically among supporters of the populist radical right. Clearly, this openly welfare chauvinist group would divert state money away from a potential out-group (the unemployed) to a potential in-group (the elderly). With regards to state support for the elderly, however, ‘putatively rational welfare chauvinists’ show similar preferences to the rest of society. Since this variety of welfare chauvinism is predominantly interested in securing the sustainability of the welfare state, they would ‘only’ cut transfers to the unemployed.

In times of increasing immigration the ‘New Progressive’s Dilemma’ describes the fear of ‘progressives’ to be forced into choosing between frictionless borders for immigrants and a generous welfare state. In this respect, Yascha Mounk correctly points out that a particularistic welfare state (e.g. one based on identity politics) that designs very specific programmes for very specific (vulnerable) groups tends to run counter to public support.

Our analysis shows that popular universal welfare programmes such as a universal basic income also suffer from a widespread vulnerability: the fear that non-natives could free ride on welfare spending without having contributed beforehand. Welfare chauvinism inherently questions welfare spending towards non-natives but particularly in programmes that seemingly oppose the principle of meritocracy. Thus, universal basic income proposals and social welfare for the unemployed come under attack not only from people who hold anti-immigration sentiments but also from those who are afraid about the sustainability of the welfare state.

The populist radical right has long since started to intertwine a nativist core ideology with economic policy proposals. For good reason, there are significant legal barriers preventing direct discrimination against immigrants in the provision of welfare. Nevertheless, proposals to reduce specific programmes that non-natives rely on tend to find a disproportionate level of approval beyond the populist radical right’s narrow electorate.

Ultimately, future welfare states run the risk of becoming more particularistic and reciprocal. This would result in them focusing on programmes that make sure benefits either serve natives or that recipients have qualified for eligibility by passing contribution thresholds. Overcoming the seduction of welfare chauvinism is a rocky path that requires addressing long established economic stereotypes.

In this sense, Yascha Mounk is right to point to the hardly noticed success stories of economic integration that many immigrant communities have experienced during previous decades. These facts need to be cited more frequently in public debates. If there is to be an inclusive narrative for promoting universal and more generous welfare programmes in diverse societies, it will need to focus on the strengths of diversity and diversification.

For more information, see the authors’ accompanying papers at the Review of International Political Economy and Rationality and Society

Note: This article gives the views of the authors, not the position of EUROPP – European Politics and Policy or the London School of Economics. Featured image credit: Lukasz Radziejewski on Unsplash

Matthias Diermeier works as the personal Research Assistant to the Director at the German Economic Institute. His research focuses on welfare state support and the economic policy of the populist radical right.

Judith Niehues works as the Head of the Research Group Micro Data and Method Development at the German Economic Institute. Her research focuses on inequality and the role of perception in the formation of welfare state preferences. 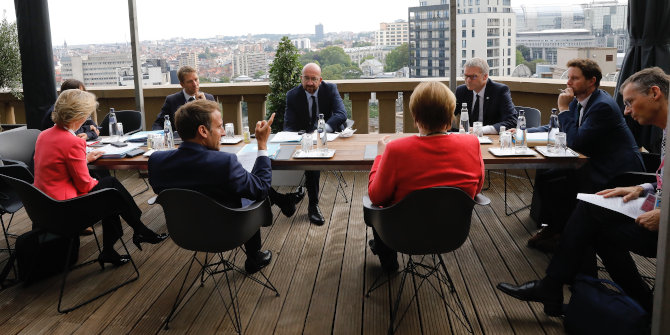