Nicolette Stickland studied the MSc Human Rights in 2012-2013.  Before that she studied BA History and Politics at the University of Oxford.  She is currently working at the think-tank CentreForum, helping with their events programme and conducting research into community schooling. 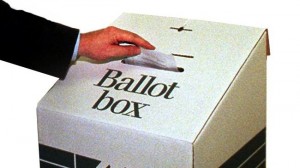 Since the official birth of modern human rights discourse, which started with the adoption by the United Nations’ General Assembly of the Universal Declaration of Human Rights in 1948 (UDHR), the ‘right to democratic participation’ has been consistently included in some form or other in all major human rights instruments.  In the UDHR it is included in Article 21. In the case of the European Convention on Human Rights, the first additional Protocol (1952) includes a specific and remediable article on the right to democracy (Article 3): ‘The High Contracting Parties undertake to hold free elections at reasonable intervals by secret ballot’. This represents the fundamental core of democracy: the demos (the people) having frequent and genuine choice of who governs them. Yet despite the codification of this democratic basis, democracy is widely proclaimed to be in crisis across nearly all western democracies, and it can be argued that at least in part this decline is linked to a faulty conceptualisation of the right to democracy, both in rights instruments and in popular discourse.

Data from the International IDEA database of elections, looking at worldwide turnout in parliamentary elections over the period 1945-2001, shows a steep decline in voter turnout since the mid-1980s. Analysis by Pintor, Gratschew and Sullivan showed that so-called ‘established democracies’ have seen a steady decline in voter turnout since the 1970s. In the UK, turnout by 2010 had fallen to 65.1%, less than two-thirds of those eligible to vote. Concurrently there has been a decline in support for the historically dominant, politically mainstream political parties across Western societies, with declines both in membership of these parties and in those who would classify themselves as strong and consistent supporters in electoral terms. According to the House of Commons Library, in 2012 just 1.1% of the UK electorate was a member of one of the three main parties, Conservatives, Labour or the Liberal Democrats. Cross-european data demonstrates that this marked decline in party membership is repeated in countries across Europe. Even more troubling, declining orientation in favour of existing democratic establishments across Western societies has usually been paralleled by an increase of support for extremist parties, which espouse if not openly anti-democratic values, at least illiberal and sometimes anti-rights ones. Some of the more frightening examples include Greece’s Golden Dawn party, which has hard-line anti-Semitic and homophobic views and has been linked with attacks on political opponents, or the German National Democratic Party, a neo-Nazi party which calls for a return to Germany’s pre-World War II boundaries.

Part of the reason for this apathy and even anti-democratic feeling seems to be that democracy is often viewed as only an entitlement rather than a participative right; a passive gift from a benign state rather than a foundation for a reciprocal and productive relationship between that institution and its individual citizens. Even in the established and historical democracies of Western Europe and North America, where we hubristically lament the lack of ‘a culture of democracy’ in other parts of the world, the democratic right seems to have retracted to consist solely of guaranteeing free and fair elections. Once that is done, the reasoning seems to go, that box is ticked and that right is fulfilled.

Of course as the European Convention protocol states, ‘free elections at reasonable intervals by secret ballot’ remain the most important part of the right to democracy. Yet they are not the whole part. Added emphasis should be placed on some form of inclusive reciprocity, of the right to be fully informed and involved in the political life of your country on a deeper and more meaningful basis than simply marking a cross on a ballet once every five years (or not even that, as is the case with more than 30% of the electorate in Britain). The central foundation of the right to democracy as an active right is education, allowing ordinary citizens to be placed on a footing in which they feel equipped to put across their views, to organise and agitate for reform and policy change; to challenge their elected politicians at their own game. While not taking away from other subjects, it would not be too much of a financial or time burden to include just an hour of compulsory weekly Citizenship courses up to age 16 in British schools.

Greater efforts should also be made to ensure that the democratic right to participate is a constant and ongoing one, not a transitory and periodic one. This does not mean reducing the time between general elections, or having referendums on every piece of legislation. But it does mean engaging more regularly and directly with the electorate.  Increased use of technology and social media, including weekly radio phone-ins, Twitter question sessions and the UK government petitions website should be embraced across parties and become a standard feature of the political landscape.

By viewing the right to democracy as a participative right we can have some hope of restoring the legitimacy of our democratic arrangements and of responding on a more legitimate and universal basis to global issues.

‘In conversation with Amartya Sen’ at the LSE