The importance of book publications in the Social Sciences and Humanities may be widely accepted, but what is the evidence of their impact? Frederik Verleysen and Tim Engels discuss the ways in which specific publications can have broad societal impact by catering to different audiences. Their recent study on the internationalisation of scholarly book publishing points to the broad spectrum of scholarly knowledge dissemination.

The rise of internationalisation has been a prime focus of bibliometric research for years. Most of the studies so far have analysed the increasing occurrence of multi-national co-authorships of journal articles. Due to a lack of data on the worldwide scholarly book output it remains difficult to ascertain whether the growing internationalisation of research and knowledge dissemination extends to book publications as well. The academic book publishing trade, however, is rapidly globalising as publishers seek out new markets and try to contract the leading scholarly authors, often working in other countries. At the same time, academic scholarly authors are increasingly aware of publisher quality and prestige.

Recently, we approached the topic of internationalisation of book publications in a methodologically novel way. We chose not to study co-authorships. Instead, we focused directly on the main catalysts of the globalisation of scholarly book publishing: academic publishers. We used a comprehensive set of over 20,000 bibliographic references to monographs, edited books and book chapters extracted from the VABB-SHW (Flemish Academic Bibliographic Database for the Social Sciences and Humanities: Engels, Ossenblok & Spruyt, 2012). An academic panel installed by the government has classified all these publications as either peer reviewed (n=4,098) or non-peer reviewed, the so-called enlightenment literature (n=16,305). By identifying and quantifying all places of publication linked to publishers of books and chapters authored by Flemish scholars during 2000-2011, we produced visual representations of research internationalisation. To this end, we adapted a methodology pioneered in bibliometric research by Belgian information science professor Ronald Rousseau, and calculated barycentres, or geographic centres of weight of places of publication of books and chapters (Verleysen & Engels, 2014a).

Figure 1: Barycentres for peer reviewed (PR) and non-peer reviewed book publications in the Social Sciences and five of its main disciplines. 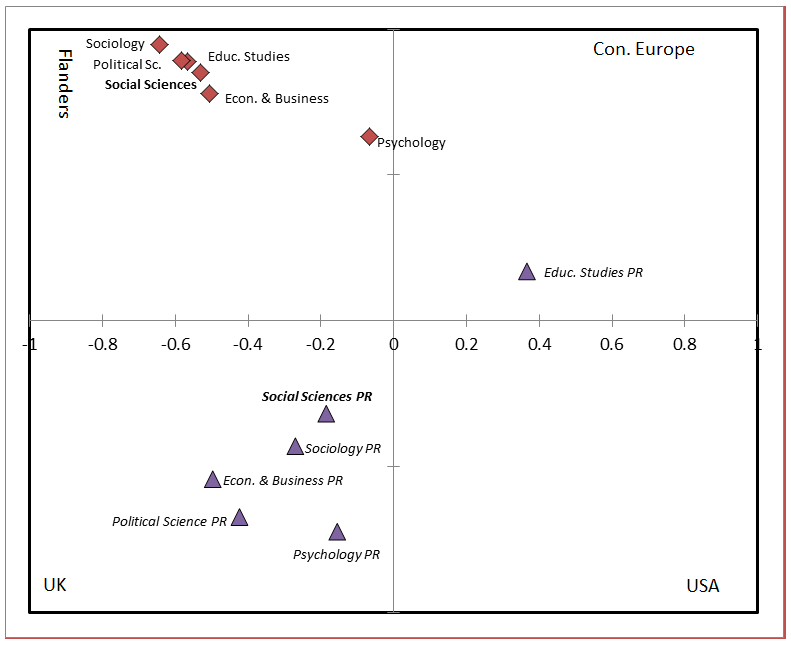 The result, depicted here in figures 1 and 2, consists of polygons in which each of the four vertices represents a different aggregation of places of publication: 1° Flanders, the domestic place of publication where all authors have a university affiliation, 2° the rest of continental Europe, 3° the USA and 4° the UK. The dots in the polygons represent the barycentres of the Social Sciences and Humanities and their main disciplines. The closer a dot is located to one vertex, the larger the share of that geographic location in the total book publication output. Every discipline is represented twice: once for the peer reviewed academic book publications (filled triangle), and once for the non-peer reviewed enlightenment literature (filled diamond).

In the figures it is striking how the peer reviewed (PR) book literature is far more international as regards place of publication than the non-peer reviewed one. This means that domestic Flemish publishers are responsible for publishing the bulk of the enlightenment literature, whereas non-domestic publishers, especially British and continental European ones, publish the majority of academic peer reviewed titles. When we compare Figure 1 with Figure 2, it is clearly visible that this discrepancy between the two book literatures is more pronounced for the Social Sciences than for the Humanities. Interestingly, we also found that the place of publication correlates significantly with publication language. Domestically Flemish-published non-peer reviewed books are most often in Dutch, whereas books published outside of Flanders are mostly in English.

Figure 2: Barycentres for peer reviewed (PR) and non-peer reviewed book publications in the Humanities and seven of its main disciplines. 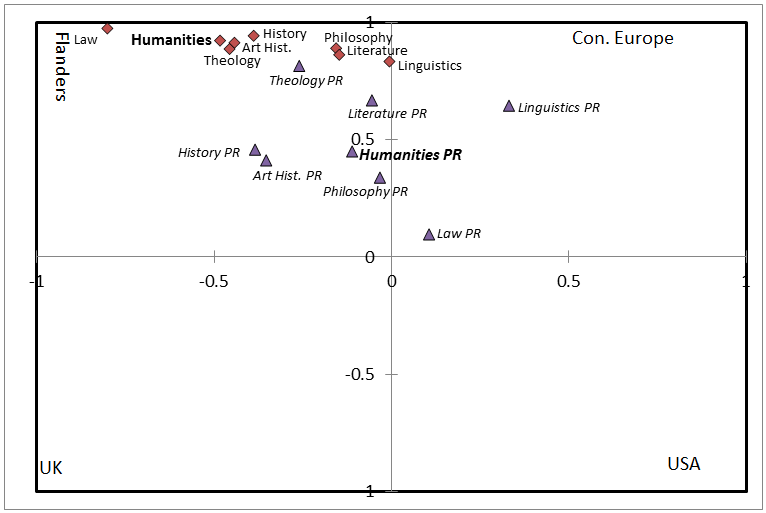 All in all, these results point to the existence in the Social Sciences of two largely disjoint book literatures. The first one consists of academic peer reviewed publications, is published mostly by British publishers and is aimed at an international readership of specialised academia. This literature puts focus on conceptual, theoretical and (comparative) empirical research. The other one is published mainly in Dutch, has not been subjected to review by academic peers prior to publication, and is aimed at a domestic intelligentsia consisting of policymakers, NGO’s, interest groups, common citizens and scholars with a national focus alike. It deals primarily with topics of national interest such as socio-economic policy, the legal system, education and national politics. Undoubtedly, to some extent a similar segmentation of book readership exists in the Humanities as well, but there the barycentre locations suggest more of a continuum in terms of place of publication, language use and intended readership.

These two distinct patterns of research internationalisation for book publications fit remarkably well with previous evidence on the diversity of publication cultures in the Social Sciences and the Humanities. For the journal literature, Ossenblok, Engels & Sivertsen (2012) found that social scientists publish more frequently in English than their colleagues from the Humanities. They also publish a larger share of their articles in journals indexed in the Web of Science. These are two firm indicators in their own right of a greater focus on internationalisation and of targeting a partially different audience than is the case in the more domestically-rooted Humanities.

Frederik Verleysen is researcher in bibliometrics of the Social Sciences and Humanities at the Expertise Center for R&D Monitoring (ECOOM) at the university of Antwerp, Belgium. He has a PhD in History and a degree in Library and Information Science.

Tim Engels is head of unit at the Department of Research Affairs and ECOOM at the University of Antwerp. He has a PhD in Psychology and teaches at the Antwerp Maritime Academy. 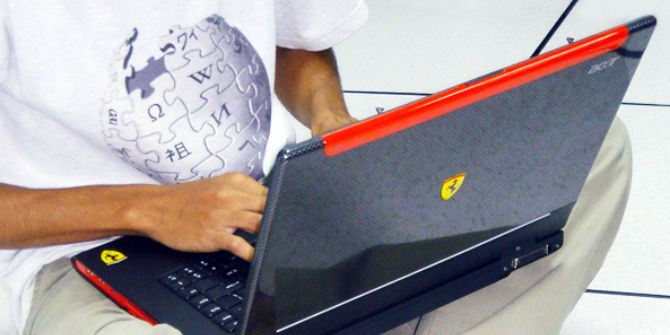