As an empirical social scientist, the conversation about interdisciplinarity has frustrated me for years. The National Academies of Sciences produced a volume in 2005 titled Facilitating Interdisciplinary Research, in which they delineated ways to support interdisciplinary research (IDR), but neglected to document that such research was, indeed, beneficial to scientists or society—or at least better than disciplinary work. This oversight was understandable: at the time, there was precious little research documenting the effects of IDR. But my frustration prompted me to ask: how does interdisciplinary research influence scholarship and scholarly careers?

I began to brainstorm about research designs and ideal data sources that would help me answer this important science policy question. Then, at an American Sociological Association meeting, a University of Arizona colleague, Joe Broschak, introduced me to Christine Beckman, who (with Taryn Stanko) had been busy collecting some data that seemed ideally suited to the task of measuring interdisciplinary engagement, and assessing its effects. After years of supplementing the data, reworking hypotheses and angles, and exploring a number of analytic techniques, we were able to write our paper about the costs and benefits of engaging in IDR. The paper will be published this month in Administrative Science Quarterly.

Image credit: intersect by in transition. This work is licensed under a CC BY 2.0 license.

Our research reveals that scholars with greater involvement with IDR are indeed prominent (as indicated by citations), but also less productive. One body of literature, organizational ecology, suggests that spanning disciplines is detrimental because interdisciplinary offerings get caught in the middle and cannot be viewed and evaluated clearly. This, we suggest, makes it harder for scholars to navigate the peer review system and publish IDR. Another body of literature, innovation, suggests that spanning disciplines is beneficial and a foundation for new ideas. This, we suggest, makes research certified by the peer review process more interesting and useful to the scientific community. Thus we hypothesized both costs (lower productivity) and benefits (higher visibility) to IDR engagement.

We also pushed this literature forward by moving away from a dichotomous concept of spanning to a continuous one that considers the degree of similarity between spanned fields. Are they cognate fields, like sociology and anthropology? Or are they cognitively distant, like publish health and optics? Spanning distant fields may be harder, but the payoff might also be greater. We used Alan Porter’s creative measure of ‘integration’ to accomplish this task.

We tested these ideas on a sample of 900 scientists from many different fields. We collected data on them and their combined 30,000 published articles from CVs, websites, Web of Science, and other databases. From the bibliography of each article, we calculated Alan Porter’s continuous IDR score that considers not just the variety of fields represented in the bibliography, but also their balance and their degree of dissimilarity. We then assessed whether and how IDR affects productivity and visibility.

Our analyses revealed that indeed there is a trade-off to pursing IDR: it increases visibility but dampens productivity. We also showed that the relationship between the spanned fields matters, especially for productivity. It is more difficult to produce and successfully publish scholarship that spans unrelated fields, such as chemical engineering and anthropology, than related fields, such as chemical and civil engineering. Spanning unrelated fields improves citations, but spanning related fields does too (if only slightly), presumably by broadening one’s prospective audience.

But the trade-offs will likely be different across institutions and fields, as will the propensities: our data show that academics at middle status institutions are less likely to engage in IDR. (These possible institutional differences have prompted another project ‘University Commitment to Interdisciplinary Research: Scope, Causes, and Consequences’ (NSF award #1461989) with Sondra Barringer, to explore how universities that pursue IDR fare.)

With supplementary data from various sources, Christine and Taryn and I were able to explore two possible mechanisms behind the documented ‘productivity penalty’. IDR could stifle productivity because it is penalized in the review process: reviewers and editors may not have the requisite skills and experience to review and appreciate interdisciplinary research. But analyses of data from two sources fail to provide support for this possibility. First, we find no significant correlation between IDR score and days under review, suggesting interdisciplinary papers did not need more help with paper development than more disciplinary papers. Second, a comparison of working papers obtained from arXiv reveals that eventually published working papers are actually more interdisciplinary than working papers that remain unpublished. IDR papers do not appear to be hindered in the review process.

IDR could also stifle productivity because the process of producing interdisciplinary scholarship—learning new concepts, literatures, and techniques, working with a diverse group of collaborators—is challenging. We find that IDR projects do indeed face these hurdles. Scholars who engage in ‘repeat collaborations’ with the same set (or subset) of authors experience a smaller productivity penalty than we see overall, so scholars do become accustomed to working with their coauthors (regardless of field). Survey responses from a small sub-sample of these scholars reveal that interdisciplinary teams have more difficulty generating ideas, and their communication is less clear, more difficult, and lower quality. Last, because our theory suggests that it is challenging to incorporate different ideas into a single paper, multidisciplinary scholars (who publish separate papers on distinct topics) likely do not face production penalties. Indeed, our results show that scholars conducting multidisciplinary research are more productive, not less.

Taken together, our foray into mechanisms reveals that the review stage may not be such a roadblock; we do not find IDR work more likely to be tossed in a file drawer or rejected. Rather, the initial stages of production, during which authors plan, coordinate, and conduct their research, is the largest hurdle for interdisciplinary work and thus that cognitive and communication obstacles are the main source of the production penalty.

This blog post is based on the author’s co-authored article, ‘Prominent but Less Productive: The Impact of Interdisciplinarity on Scientists’ Research’, published in Administrative Science Quarterly (DOI: 10.1177/0001839216665364).

Erin Leahey is a professor in the School of Sociology at the University of Arizona. Her research focuses on scientific practice and scientific careers, with a special emphasis on specialization and interdisciplinarity. In a current NSF-funded project (award #1461989), she is moving up to an organizational level of analysis to examine universities’ commitment to interdisciplinarity and how it affects valued social and economic outcomes. She received her Ph.D. in sociology from UNC Chapel Hill. 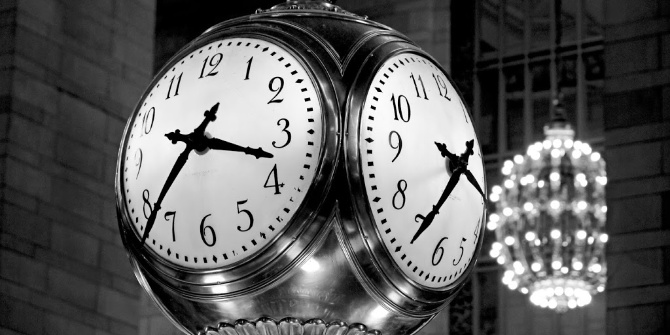