Despite affecting one in 12 men and one in 200 women, colour blindness rarely features in discussions around access and inclusivity. Oliver Daddow explains how his preferred research methodology has been informed by his colour blindness, but also reveals the frustration he has felt since joining Twitter earlier this year. A variety of data representations are increasingly shared via social media, yet many are indecipherable to those with colour blindness. Bad graphic design prevents significant numbers of people from engaging with certain work because it limits access to the data. Generally, elements favourable for colour blind users are actually considered good design practice in a wider sense. Designing for colour blind users should help make your work more accessible to all users.

As a political scientist working on the story of Brexit and British European policy, I spend a lot of time reflecting on what I research, how I research, and why I research particular subjects. The method I have been developing for several years now is text-based discourse analysis: the formal study of ideas informing political practices. In other words: what do politicians think they are doing by making this or that policy?

Discourse analysts spend their time immersed in the study of words and phrases that expose the belief systems and world views of those elected to lead us. It is not a method for the faint of heart, nor anyone with an aversion to highlighter pens. As an example, for my 2011 book on New Labour I coded and interpreted well over 100 speeches by Tony Blair and Gordon Brown. It is still a relatively niche method and, as with many methods, is not always well understood by those who have never done it. Sometimes it is confused, mistakenly or intentionally, with the standard practice of quoting extensively in a piece of writing (you know who you are).

I used to put my choice of method down to an innate geekiness and a keen eye for the detail of what people say and how they say it. Moreover, I’ve always been fascinated by casting fresh light on old political problems by identifying rhetorical connections that others have either skimmed past or overlooked altogether. These factors certainly help explain my interest in discourse: our writing always and inescapably expresses who we are as people and personalities.

However, over the past few months I have concluded that there is something more basic at play: my colour blindness. I have known I was colour blind since I was six or seven years old, when I was at primary school. In art classes I used to paint the sky purple, tree trunks green, grass red and daffodils lime green. My mum thought I might have been a latter-day Picasso with an avant garde interest in challenging artistic norms.

I do not recall every child being tested back then (this was the early 1980s); however, after school one day I recall being invited to take the standard Ishihara Test for Colour Deficiency (the numbers are hidden in dots), which revealed the statistically more probable cause of my artistic genius: colour blindness. I continue to enjoy art but I am yet to have my oeuvre in the Tate Modern.

It is not going overboard to say, though, that the link between my colour blindness and my academic pursuits only crystallised properly after joining Twitter earlier this year. Social media helped me connect with organisations such as Colour Blind Awareness, which I noticed retweeting my requests to organisations such as the BBC to, please, stop using red on green in their on-screen golf scorecards. Despite a formal email complaint many months ago, the BBC has still never responded – but that is for another day. Following Colour Blind Awareness has educated me hugely about the nature and causes of colour deficiency, as well as helping me connect with the daily lived experiences of colour blind people from all over the world. It certainly makes me feel less of an exhibit, wheeled out to identify the colour of people’s jumpers in pubs.

This set of social media connections in turn helped me look again at the graphs, images, figures, and tables that are a staple of Twitter feeds of the politically interested. I am bombarded with them, hundreds popping up in various contexts daily. Opinion polls, leadership ratings, PowerPoint lecture slides, pie charts of public expenditure, Brexit negotiation flow charts, political party election manifesto summaries; all get the full treatment. Most books and journal articles are limited to publishing graphics in black and white, due to the cost and other barriers to the use of colour in mass printing. On Twitter, however, they are presented in a veritable riot of colour. In an aesthetic sense, why not? 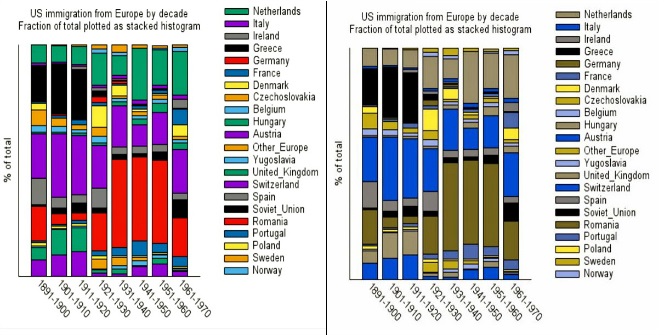 An example of how a multicoloured histogram (left) appears to those affected by protanopia (right).  The image is taken from Gnuplot Bar Graph by Linux Screenshots and is licensed under a CC BY 2.0 license. It has been adapted to demonstrate how it appears to those with colour blindness.

The problem is that, being colour blind, I can only read around half of them at best. I can spend time deciphering what is going on in a few of the remainder. The rest remain an impenetrable mass of lines and words, the content of which is meaningless, unless some kind soul provides an accompanying narrative, which in 140 characters is, really, impossible. Where colour “normal” Twitter users can process the data quickly and move on, having learned something new and valuable, the colour blind either must spend a long time fathoming it, or are physically unable to process the data at all.

This, then, is what I think may explain my choice of method as a political scientist. I have, unconsciously but no less significantly for it, selected a method that enables me to work from black and white, which I fill with my own “colour”, literally and metaphorically. Onto the black and white text, I code the key words and phrases I need using primary colours I can see most easily. I then draw the connections from that newly coloured data and interpret it for my books, articles, and opinion pieces. Managing colour blindness has, read this way, shaped my entire career. Too strong? I think not.

The BBC has rightly been called to account for its 2015 election coverage being unwatchable or very challenging for colour blind viewers. Yet with around one in 12 men and one in 200 women colour blind in some form, it is time designing for the colour blind became a much more integrated component of academic and media training. Bad graphic design prevents significant numbers of the population from engaging with your work because it limits access to your data. This is equally true of those who have been diagnosed with colour blindness as well as considerable numbers of people who remain undiagnosed. Remember some basics: do not put greens, reds, and browns on or near each other, while blue and purple can look the same. This is just scratching the surface, but space forbids a full training session here.

Society has moved a long way from the days when a former colleague of mine would congratulate me on my yellow tie at work (it was always blue or purple, ha). Yet colour blindness, seemingly, is a “hidden” disadvantage that does not get the attention it deserves. Engagement by all sorts of neglected “groups” in society is a hot political topic, so this is my plea on behalf of the colour blind. If all members of a society are to engage equally on matters that affect all of us, then designing politics-related graphics so they can be read by everyone would be a hugely important step for young and old alike. In the meantime, for the colour blind political scientist, I highly recommend discourse analysis.

This post has been published simultaneously by Colour Blind Awareness.

Oliver Daddow is Assistant Professor in British Politics and Security in the School of Politics and International Relations at the University of Nottingham. He is the author of many books, articles, and opinion pieces on Brexit, British European policy and Euroscepticism, as well as a textbook on International Relations Theory. He is currently writing a book called Brexit: The Conservative Party and the UK’s Withdrawal from Europe (Manchester University Press). His full list of publications is available online and he tweets @oliver_daddow. 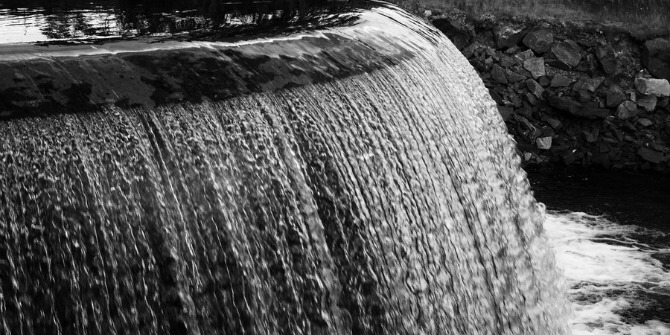