Metrics already perform a powerful productive role in the social world; they vindicate and limit, they cajole and incentivise, they legitimate and justify. When we reflect on how metrics are frequently used to manage performance, to facilitate competition, to judge us or to compare what we do with others, it is crucial that we see metrics as being central to the power dynamics of the age in which we live, writes David Beer.

When the Arsenal manager Arsène Wenger revealed that stats played a role in the signing of the defender Gabriel Paulista it created some fairly temperate discussion, but no one seemed to be particularly surprised. Data is now a routine part of football. The game is saturated with references to data. Listen to a match commentary on the radio or TV and you will find frequent use of a range of different statistical measures. Radio phone-ins often see fans discussing statistics that they have found revealing or which shed new light on a player, manager, referee or team’s performance. Then, of course, we have the use of data by football clubs.

As the above example suggests, data is now an established and familiar part of decision making, recruitment and squad selection. Data are even used to shape the actions of players on the pitch. Pass completion rates are often cited as a common statistical measure of player performance as is final-third penetrations, but these are just two stats amongst many. The tracking of the movement of players around the pitch and the traces of their actions has lead to vast match and player performance datasets. As a result, many of the top teams now have embedded data analysts working with their squads – this video provides an interesting example of one such data analysis department in action.

Beyond this, as with other sectors, we have also seen the emergence of a data analytics industry and a growing power of the expert data analysts, with companies like Opta and Prozone offering data solutions packages to clubs, journalists and interested fans. These types of analytics are designed to make decisions and judgments feel more neutral, informed and objective. They are marketed in terms of their ability to find hidden value, to enhance efficiency and to limit risk and error. Arsène Wenger defended the use of statistics only where they could reinforce the coach’s ‘eye’, indicating that there is some reluctance to give up entirely on human discretion and autonomy, but this example is suggestive of just how powerful metrics have become in football and just how embedded they are in the playing of the game. 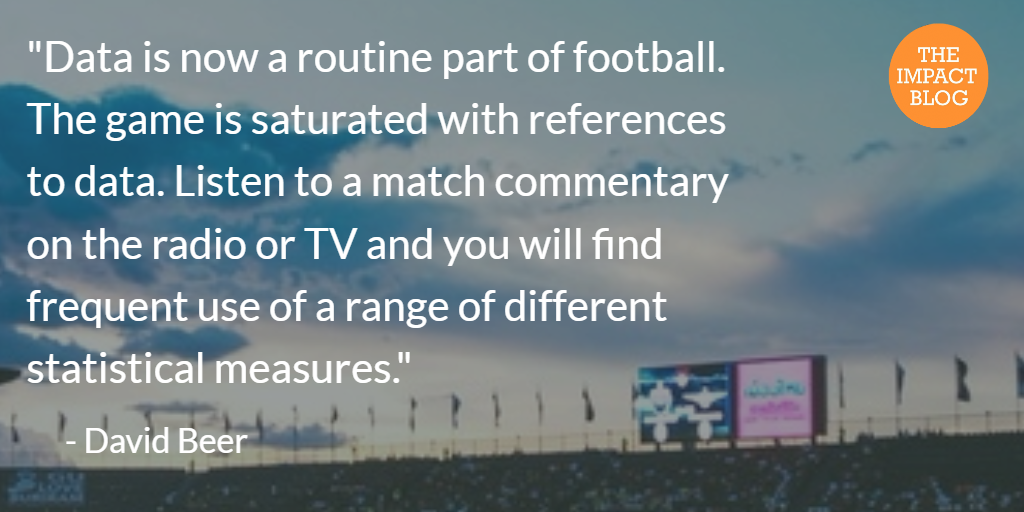 What we might be thinking at this point, reflecting on the example of football, is that data and systems of measurement do not just have implications for this one game alone. Rather data and metrics now perform a central role in the playing of the social game in a broader sense. Football is a useful example because it reveals the potential power of systems of measurement to shape our lives in different ways, and it is suggestive of how metrics are spreading outwards across the social world. The way that we are measured has profound implications for our lives, the opportunities we have and for our everyday experiences. As Ian Hacking put it in his book The Taming of Chance, numbers are used to ‘make people up’. We can only imagine that we are made up, like footballers, in increasingly powerful and wide-ranging ways. The processes of making people up have escalated as the volume and depth of data about us increases.

These are productive measures. We often think of measurement as in some way capturing the properties of the world we live in. This might be the case, but we can also suggest that the way that we are measured produces certain outcomes. We adapt to the systems of measurement that we are living within. To take one simple example from football, it has been suggested that players are now adapting their game to do well in the statistics. The pass completion rate, for instance, encourages short and safe horizontal passing rather than risky forward passes. In fact, there was some unease when a recently retired player suggested that players were becoming obsessed by stats such as this and that they have become caught up in using them to gauge and shape their own performance. This might translate into how we respond to the way that we are measured at work, in our leisure, in our consumption and in our lifestyle.

I recently downloaded a well-known cycling app onto my smartphone. The app tracked my cycle ride to work. I instantly found that I was cycling differently. I took longer routes so as to increase my cumulative distance for example. Most notably, I tried to go as fast as I was able on a stretch of the journey with which I could compare myself with other cyclists in the area. I soon deleted the app. Not just because of this change in my behaviour, promoted as it was by how I anticipated the measures to capture my activities, but also because of the surveillance implications (my life was being mapped). This makes me wonder how people adapt their calorie intake and lifestyle regimes when faced with the productive measures of the increasingly popular fitbit system of measurement. This is not just the quantification of self, it is the remaking of self in response to the anticipated outcomes of the measures such a system produces.

We have to think about the complexity of the mass of different ways in which people are measured to begin to think about how lives are shaped by metrics. This is not easy and requires us to think technically, culturally and historically about the problem. We may not be living in quite such an advanced data assemblage as the professional footballer, but we have probably experienced the pressures placed upon us by metrics – particularly as new aspects and perspectives on our lives become more visible in the numbers that are produced. The power of these systems of measurement is to be found in the way that they make us feel and in how, as a consequence, they cajole our behaviour. The measurements themselves matter, but it is knowing or expecting how we will be measured that is really powerful. Systems of measurement then have productive powers in our lives, both in terms of how we respond to them and how they inform the judgments and decisions that impact upon us.

When we consider something like the individualising and isolating implications of neoliberal forms of governance, we would need to think about the way that the advancement of systems of measurement might be responsible for extending the reach of marketised competition. As the data assemblage in which we live increases its range and scope so the possibilities for introducing and enhancing competition escalate. In the productive power of systems of measurement we may well then be looking at the very mechanisms of neoliberal competition. We are also looking at the means by which neoliberalism translates into individual action.

It is here that we might come, as Philip Mirowski has suggested in Never Let A Serious Crisis Got To Waste, to ‘explore the accretion of neoliberal attitudes, imaginaries, and practices that have come to inform everyday life’. We can certainly see what Mirowski has called ‘everyday neoliberalism’ in the way that metrics are imagined in the football case study – the very terminology is one of increasing efficiency, hidden value and expert-led competitiveness. This terminology and rhetoric though spreads far beyond football as we have seen in Will Davies’ excellent recent book The Limits of Neoliberalism.

The measurement of people’s lives has a long history, it is not something that just happened when smart phones, GPS and other digital traces came into our lives. We might even track it back to through the history of statistics as far as the 17th century. But there is little doubt that the intensity of the measurement of our lives has escalated. The rise of the data analytics industry in football is one instance that reveals something broader. It shows how the data infrastructures in which we live have increased in their scope and range of possibilities. The analytics industry is finding ways to become more commanding, to embed themselves and to sell their revelationary power to us. Organisations are trying to find ways of using those accumulating data to various ends. Football is a useful case study in that it allows us to see just how powerful metrics can (be seen to) be. It allows us to think about how metrics might produce different outcomes, dictate decisions and continue to shape our lives.

Metrics already perform a powerful productive role in the social world; they vindicate and limit, they cajole and incentivise, they legitimate and justify. When we reflect on how metrics are frequently used to manage performance, to facilitate competition, to judge us or to compare what we do with others, it is crucial that we see metrics as being central to the power dynamics of the age in which we live. We might well find ourselves drawn towards the equivalent of football’s safe sideways-completed pass or whatever action it is that will allow us to demonstrate our value and enable us to do well in the metrics to which we are exposed.

Note: This article gives the views of the author, and not the position of the Impact of Social Sciences blog, nor of the London School of Economics. Please read our comments policy before posting.

David Beer is Senior Lecturer in Sociology at the University of York. He has recently published an article on productive measures and everyday neoliberalism in the open access journal Big Data & Society. His other publications include Punk Sociology (2014), Popular Culture and New Media: The Politics of Circulation (2013) and New Media: The Key Concepts (2008, with Nicholas Gane). He is currently writing a book with the working title Metric Power: Measurement, Circulation, Possibility.