In a frenetic world obsessed with deliverables and results, Jenny Odell makes the case for How to Do Nothing: Resisting the Attention Economy, arguing not for passivity, wilful ignorance or sloth, but rather for the potential we create by refusing productivity and redirecting our attention to active modes of listening and contemplation. By shining a critical light on the ways in which our identities have become entangled with our occupations and advocating modes of reclaiming the power of our own curiosity, this book will be ideal for all those who feel off-kilter in the attention-seeking economy, writes Christine Sweeney.

How to Do Nothing: Resisting the Attention Economy. Jenny Odell. Melville House Publishing. 2019.

The Potential of Nothing is Everything

How to Do Nothing: Resisting the Attention Economy by Jenny Odell caught my attention as someone who is anxious about not doing enough, while feeling I’ve overcommitted to too many things. A function of over-promising and under-delivering in a world obsessed with deliverables and results.

Naturally, in reading a book about How to Do Nothing, it seemed necessary for me to not read it simply for the pleasure of reading it, but to commit to a book review. I raced through the book when I had time, between hosting my parents over the holidays, reading two books for two separate book clubs and meeting the responsibilities of my day job as a freelance content creator. I list these not to illicit your sympathy or to contribute to the cult of busyness, but rather to make the case that reading How to Do Nothing was not so much another project as a cry for self-help.

In the spirit of killing two tasks with one read, I thought Odell’s equally multi-tasking social science/self-help book could a) relieve my guilt to always be on (ABO is the new FOMO, didn’t you know?) by confirming that ‘yes, indeed you are doing too much’; and b) show me how to productively organise my time while doing nothing.

Weeks past my original self-imposed deadline, weeks filled with doing everything while feeling as though I accomplished nothing at all, here is my review. At its heart, How to Do Nothing attributes the stress that many of us feel about not doing enough of what is important to our submission to the constant clamour for our attention from things we don’t really like, and likely don’t need, to be doing. See: Social Media.

The case for nothing is not a case for passivity, wilful ignorance or sloth

This book is poignantly written by Odell, a millennial. This illusive generation born between the mid-80s and mid-90s who, in addition to being blamed for spending too much on avocados and flat whites while also killing the economy, are notable for being the last generation born before the internet. Not quite digital natives so much as digital pioneers (whatever that means). From her position as an artist, writer and teacher at Stanford University, Odell has seen the optimistic rise and parabolic upward slope of the digital age. Having worked in digital marketing, her understanding of how data can be used to understand humans not as humans, but rather as consumers, informs her art, a desire to take stock of the rampant changes we have seen over the past decade and a half. ‘I find existing things more interesting than anything I could possibly make.’ From this position, she invites readers to consider the possibility that you can get a lot, potentially more, out of observing rather than adding to the world around us.

This is the launching point for Odell’s case for nothing. The case for nothing is not a case for passivity, wilful ignorance or sloth, but rather for the potential we create by redirecting our attention. She uses the example of public art to create a ‘structure […] that holds open a contemplative space, against pressures of habit, familiarity and distraction that constantly threaten to close it’. Just as it is said that good writing makes the familiar seem unfamiliar and vice versa, redirecting our attention to see what already exists in a new way is not nothing.

Similarly, Odell uses Nature, the original public art, to demonstrate what happens when you do nothing. As a bird watcher herself, Odell suggests that bird watching be reimagined as bird listening. Bird watching implies an active pursuit, when really ‘bird watching is the opposite of looking up something online’: you can’t look for birds; they find you. The sensory stimulation we find in nature and public art is something that finds us and, Odell suggests, enriches us.

What gets in the way of this natural process? ‘A colonization of the self by capitalist ideas of productivity and efficiency’, this idea that ‘we should all be entrepreneurs’. Indeed, those who subscribe either by necessity or desire to the cult of hustle in this gig economy might respond: ‘why shouldn’t we all be entrepreneurs?’ Odell’s clear writing, asking us to question our unwitting acceptance of cultural and economic phenomena like mass-entrepreneurship, underscores its absurdity.

From the emergence of ‘personal brands’ to the dissolution of boundaries between work and play, How to Do Nothing shines a light on the ways in which our identities have been entangled with our occupations. Without the distance and space needed to reflect on personal values, they have become enmeshed in those defined by what we do, often determined for us by corporate values. This redirection towards introspection requires ‘refusing productivity’ in favour of active listening and observation. This refusal, Odell writes, is the antidote to the modern age’s overwhelming rhetoric of growth.

‘In other words, digital distraction was a bane, not because it made people less productive, but because it took them away from the one life they had to live.’ Odell emphasises that the refusal of productivity isn’t a new endeavour. She provides a concise overview of counter-cultural theories and movements from that of the ancient Greek philosopher Epicurus, who espoused happiness and leisurely contemplation to be the loftiest goals in life, to the communes of the 1960s and 1970s. However, she notes that many of these movements broke from responsibility to the same societies they sought to change or reinvent. Indeed, for Odell, resisting the attention economy crucially involves a form of intentional resistance, a resistance with the potential to change our societal course.

Social media isn’t entirely evil, but the way it has been used to reduce, commodify and monetise our interactions has contributed to our stunted ability to self-reflect and form meaningful connections with others

Unlike past movements, often driven by a degree of cynicism or nihilism towards the status quo, Odell describes the role of idealism: ‘allowing yourself to believe in another world while living in this one’. By believing that the world can be better, we can refuse calls for our attention that do not serve us and reclaim our attention, directing it towards people and places and activities that we personally value. In a chapter titled ‘Anatomy of Refusal’, Odell notes that the ‘potential of nothing is everything’. Particularly in our hyperconnected digital age, our attention is our capital, and ‘an individual capacity to pay attention is an act of refusal to participate’.

Odell doesn’t present herself as a Luddite. Social media isn’t entirely evil, but the way it has been used to reduce, commodify and monetise our interactions has contributed to our stunted ability to self-reflect and form meaningful connections with others. Further, she acknowledges the privilege of switching off, of disconnecting from social media. Former tech executives like Tristan Harris, who formed the Time Well Spent nonprofit (now the Center for Humane Technology), bring their social media social capital to critique the attention economy, while failing to challenge the foundations of late capitalism like consumerism and deregulation. There is a degree of skepticism towards a movement against social media developed by those who designed it. To target social media without considering the other sources of hyperconnectivity and productivity, like other social discovery platforms or being available to work 24/7, fails to recognise our agency, our own power of attention and curiosity.

Odell writes that the ‘externalities of attention economy distractions keep us from doing the things we want to do […] long term, they keep us from living the lives we want to live.’ It’s not about disconnecting, but rather taking greater care in how we connect and what we use that connection to do, what we communicate and how. When we leave our connectivity and communication to technology, we allow algorithms to suggest friends, partners, lovers and songs without leaving the possibility open for those things that don’t fit our ‘personal brand’.

When we choose our attention over algorithms, by turning on the radio rather than our curated playlist, for example, ‘we decide who to hear, who to see, and who in our world has agency’. Redirecting our attention away from what the algorithms suggest for us, as perfect as those songs or matches might seem, we can welcome back context. Odell references danah boyd’s concept of context collapse. By producing and consuming media, from news to personal photos to dating profiles to CVs, on overlapping platforms, we reduce or remove context. But to truly understand, or attempt to understand, something, we must seek context. Context allows for change, yet how one presents oneself on social media creates an inability to publicly change our minds. Think of the ways in which public figures are called out when they make statements that contrast with posts they made on social media from ten years ago. Without context, there is little space for the nuanced ways we change and evolve.

Stepping away from my own reading of How to Do Nothing’s messages, I can see how it may prove tiresome for those seeking to categorise it as it floats between philosophy, psychology and self-help. In many ways, those drawn to a title like How to Do Nothing are perhaps not the book’s target audience. Like an algorithm that tricks you into believing something that was perfect for you found you, How to Do Nothing is ideal for those who feel off-kilter in this attention-seeking economy. All the same, the book reads like having a lively and engaging conversation with an artist, technologist and cultural writer – all facets of Odell and her work. Unlike many contemporary self-help books, How to Do Nothing is not about optimisation; it’s about something more abstract. To paraphrase Odell, resisting the attention economy is like falling in love, where we appear as though our heads are in the clouds. Our attention is turned towards less visible things, like the complexity of understanding a person or noticing a bird that flew by. 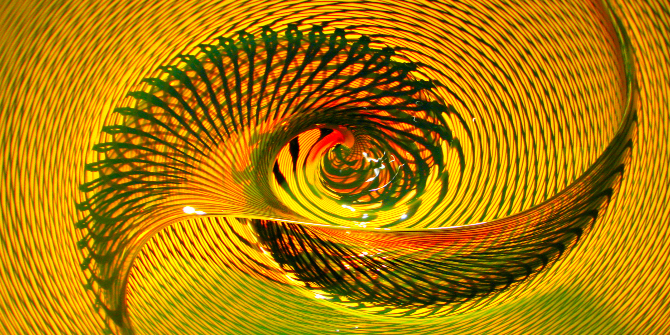