Ken Shadlen, along with Mark Manger (formerly of LSE), has been awarded the Open Article prize for 2014 from the Economics and Politics Section of the Latin American Studies Association.

The research was funded by the LSE’s Suntory and Toyota International Centres for Economics and Related Disciplines (STICERD).

“We found the article to be a very strong contribution to understanding the political economy of international trade.

“It addresses an important puzzle (why do countries in the global south seek regional trade agreements with countries where a generalized preference already exists especially when the RTA means concessions on the part of the low-income country). With an innovative theory and broad quantitative analysis, the authors suggest that political trade dependence encourages countries in the global south to pursue such agreements.

We found the article to be a very strong contribution to understanding the political economy of international trade.

The department extends its congratulations to Ken and Mark on their achievement. 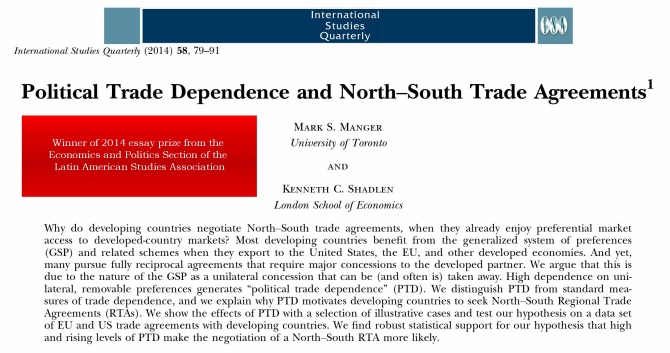 Posted In: News from the Department | Publications