The 25th May 2019 marks a year since the Republic of Ireland popularly voted to legalise abortion by repealing the Eighth Amendment from the constitution, marking on an ongoing cultural shift in the country. Three Master’s students, Eric Frasco, Eloise O’Carroll and Rachel Speechley, tell us more about the campaign leading up to it. 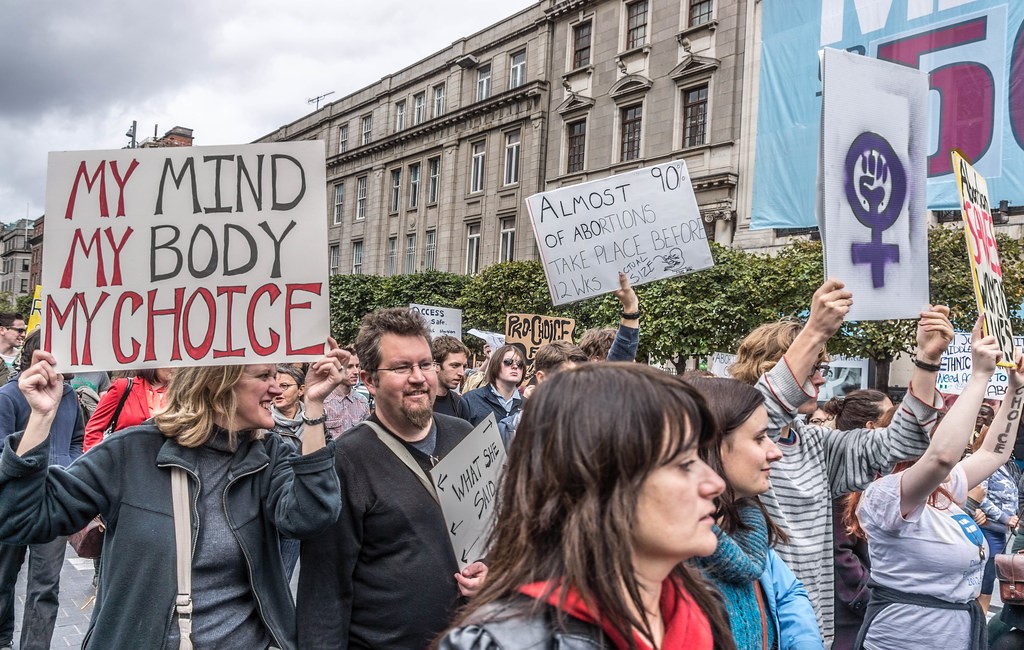 The Taoiseach (Prime Minister) Leo Varadkar, last year, called the result a “quiet revolution that’s been taking place in Ireland over the past 20 years”. The Repeal campaign, as it came to be known, marks tremendous progress in women’s rights. In a country where contraception was not available without a prescription until 1985, the vote to legalise abortion a few decades later highlights the sweeping liberal shift that Ireland has recently experienced.

Abortion had been criminalised since 1861 in Ireland, and was further strengthened by the Eighth Amendment of 1983 which granted the mother and the ‘unborn foetus equal rights’ and rendered abortion illegal. Every day, about 12 women would travel abroad, most often to England, to have an abortion.

The Repeal campaign was decades in the making, but the Abortion Rights Campaign was created in 2012 with the goal to introduce free, legal and safe abortion care in Ireland and Northern Ireland. It initiated the “March for Choice” taking place annually on the International Safe Abortion Day. In 2017, the march gathered 40,000 people in Dublin, as well as thousands more around the world.

But it was Savita Halappanavar’s untimely death in 2012 that galvanised the movement. 31-year-old Savita was denied an abortion following an incomplete miscarriage, on the ground that her request was illegal. Thousands rallied outside the Dail (Irish Parliament) in 2012, chanting “Savita”, her name as a rallying cry. 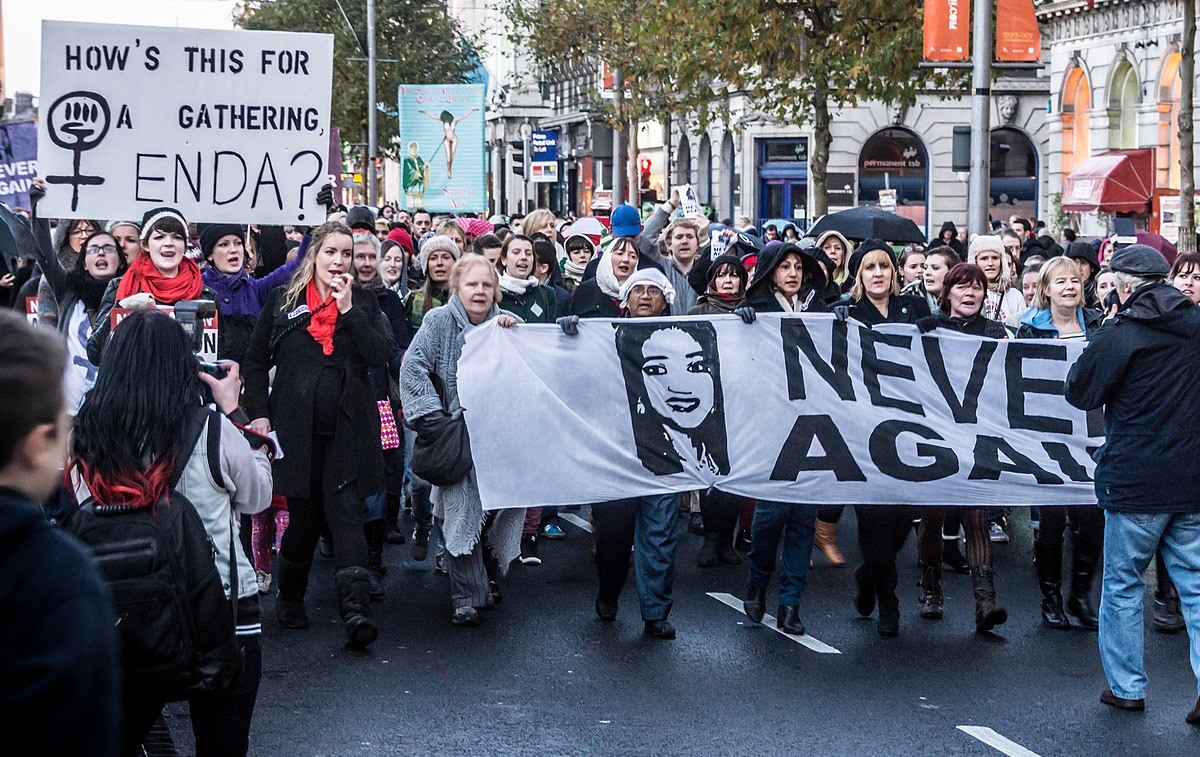 The government knew it was time for change when the Irish Citizens’ Assembly, representing Irish society, decided the constitutional provision on abortion was unfit for purpose and should be changed.

To get an insider’s perspective, we interviewed influential organisers and campaigners who were active in the fight from its early days. Repeal was made possible by a long grassroots campaign that brought together three organisations (Abortion Rights Campaign, National Women’s Council of Ireland, and Coalition to Repeal the Eighth Amendment) to form the pro-choice national civil society campaign, Together for Yes.

The fight for a referendum did not happen overnight. First, activists had to get the issue on the political agenda, which took years of dedicated activism. The Coalition to Repeal the Eighth Amendment was established five years prior to the referendum vote. Coalition founder Ailbhe Smyth told us “from 2012, we needed to heave the issue onto the political agenda in the shape of a referendum, because we did not have willing politicians or governments at the point. Politicians did not want to address the issue.”

Success was due in large part to the campaign’s ability to unite diverse members of civil society, political parties and the private sector with opposing views. Together for Yes was made up of over 120 organisations, including some unlikely allies, such as Farmers for Yes, Lads for Choice, Catholics Together for Yes and Grandparents For Repeal.

Organisers unanimously highlighted the importance of framing abortion as a health issue that affected all women. Campaigners took a soft approach when discussing the issue with the public, recognising that this was not an easy topic for people to talk about. As a way of normalising the issue, the campaign made very positive use of personal narratives to share lived experiences by women who had had abortions, giving the issue a more tangible individual feeling.

“We did something amazing, but it’s not over” told us Kathy D’Arcy, from Abortion Rights Campaign. Whilst the referendum passed with 66.4% of the votes in favour of repealing the Eighth, there are still major challenges to the application of the law.

For one, in Ireland, only a tenth of GPs and half of the hospitals in the country offer terminations as of April. This is a huge barrier to rural pregnant women, who have to travel further to seek abortion services, costing them time and money. The mandatory two-day waiting period between visits for an abortion is a costly burden some women cannot afford. Women across the country still face hurdles to accessing abortion services.

While progress has been made, the fight for free, safe and legal abortion still continues. One of the crucial next steps is addressing the issue in Northern Ireland, where abortion remains illegal under nearly all circumstances. The campaigners in the North were “a huge help” during the referendum in the Republic, and Kathy D’Arcy states that “Abortion Rights Campaign feels an enormous responsibility to our sisters in the North to continue the fight.” Equal marriage is also still not permitted in the North.

Abortion care in the world

Worldwide, women’s reproductive rights and bodies are still being suppressed. Recent developments in the United States serve as a sober reminder that women’s rights are not inalienable. The recent Alabama, Georgia and Missouri (among others) abortion bans, dubbed “heartbeat” bills, have made headlines internationally. In the state of Alabama, it is worth noting that the 25 Republicans who voted in the law were white men, whilst the Alabama law will disproportionately affect black and poor women.

Clinicians in Alabama who care for women who want an abortion in the state would risk up to 99 years imprisonment. That is a longer criminal sentence than a rapist would serve, if any at all. This is a direct attack on women’s essential right to bodily autonomy. Nonetheless, US bans may be a stark reminder that abortion laws in Northern Ireland are harsher than in Alabama. Indeed, Victorian laws in place state that anyone procuring an abortion could be imprisoned for life.

But the law in Northern Ireland can – and should – change, as it did in Ireland. If you live in the UK, you can write to your MP here. You can support Alliance 4 Yes or the London Abortion Rights Campaign branch. You could also read more on why women’s rights are so important, including the right to bodily autonomy, and read Una Mullally’s inspiring book, Repeal the Eighth.

Most importantly, you can do what our interviewees did: talk to people about these issues. Your family, your friends, those who disagree with you. The Repeal campaign was not only borne out of intense campaigning. At the end of the day, Repealing the Eighth was successful because campaigners reached out into their communities with empathy and understanding. You could be part of the Northern Irish story of change.

We wish to thank Ailbhe Smyth, Co-Director of Together for Yes, Kathy D’Arcy, Chair of the Cork branch of Abortion Rights Campaign and Together for Yes, Jacinta Lynch, campaigner in Roscommon, Lisa O’Carroll, journalist at The Guardian and Kalianne Farren, campaigner in Dublin, who informed the case study on the campaigning for Repeal movement prepared for Duncan Green’s “Advocacy, Campaigning and Grassroots Activism” course at LSE. Thank you for your time, wisdom and ongoing commitment to women’s rights.

Eloïse O’Carroll is an MSc Environment and Development student and an Economics and Development graduate from McGill University. She has a keen interest in sustainable development, and particularly in the role of the private sector in advancing environmental and social goals.

Rachel Speechley is an MSc Environment and Development student and holds an Honours BA in Hispanic Studies and Sociology from McGill University. She has previously worked in the NGO sector and plans to return after LSE.

Eric Frasco is an MSc Development Management student at LSE and holds a BA in International Relations and Psychology. He is broadly interested in global mental health policy and advocacy.