This one-day workshop examined the value of the ongoing hold of modernity on the international imagination. In many ways, IR has a peculiar relationship with modernity in that it is in the only social science to see modernity as originating in the 17th century (through the Peace of Westphalia that is regarded as the point of origin for the modern sovereignty regime). For its part, historical sociology as a field of enquiry tends to see modernity as emerging during the 19th century ‘global transformation’.

Regardless of these different starting points, over recent years, a number of critics in both IR and historical sociology have argued that the concept of modernity occludes more than it reveals. Modernity is said to privilege the experience of the white West and obscure the coercive practices, not least colonialism, on which Western power has been constructed. At the same time, modernity is said to be suffused in concepts and modes of thinking that legitimate extant power hierarchies, while overwhelming experiences and cosmologies that lie outside its purview. If there are few areas of social science that have been studied as much as modernity, there are few issues that have been more subject to critique.

The workshop, attended by faculty and research students from the UK, continental Europe and North America, discussed a range of questions that flow from this starting point: 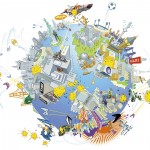 Perhaps unsurprisingly given the scale and scope of these questions, the workshop provided no straightforward conclusions. Rather, participants discussed a wide-ranging set of issues, from the ‘modern’ features of the Tanzanian peasantry to the recent Chinese ‘modernizing’ mission. If participants agreed on little, they agreed to disagree in a spirit of productive intellectual exchange. And all agreed that modernity retains a close hold over analysis and practices of development, law, global governance, security, intervention, revolution, and more. If recent decades have seen the emergence of scholarship that ‘can’t live with modernity’, it remains the case that many in the contemporary academy ‘can’t live without it’.