Former President of Mexico (1988-94) Carlos Salinas de Gortari, one of the architects of the North American Free Trade Agreement, argues that NAFTA’s significant achievements have been underplayed. Instead of tearing up the agreement, as Donald Trump has proposed, Mexico, the US, and Canada must reinforce it if they are to compete with other world regions.

The key to recovering lost jobs and promoting wellbeing for those worst hit by transformations in the global economy is competitiveness. But competitiveness cannot be achieved through paternalistic gestures towards workers, autocratic attacks on individual firms, or by disowning vital partners in international trade. Destabilising relations with Mexico will certainly damage the dynamic region built around the North American Free Trade Agreement (NAFTA), but it won’t improve US competitiveness vis-à-vis other regions. The huge economic power of a single country and the erection of trade barriers to Chinese exports are no longer enough. Only North America as a region provides an effective competitive platform for its constituent nations. Rather than undermining NAFTA, Trump in the US, Trudeau in Canada, and Peña Nieto in Mexico must work together to reinforce it.

In the early 1990s this was clear to all three North American governments, including my own in Mexico. In previous decades a regional free-trade agreement had been offered, but it made little sense for us. In the 1970s our development was premised on oil exports and restricted access, and in the 1980s our foreign debt levels meant we could be held to ransom in trade negotiations and might not achieve fair access to US markets. But the fall of the Berlin Wall in 1989 changed everything. Attention shifted towards Central and Eastern Europe, and Mexico suddenly faced a long wait for debt reductions and a return to growth. As Keynes put it, “when the facts change, I change my mind; what do you do, sir?”

Four years of negotiations infused US-Mexico relations with an unprecedented degree of maturity. By tackling our differences and channelling our respective interests, we began to overcome a long history of conflict. Sometimes we were allies, sometimes adversaries, but always within a framework of dignity and respect. Where once we were doomed to be neighbours, now we were building a shared destiny.

The same approach must prevail again today, especially with the new challenges presented by Donald Trump. Then as now we had to alternate between alliance and adversarialism, yet we did so in a fluid, civilised, and mature manner. As allies we promoted the “Fast Track” route in Congress. Then as adversaries we negotiated the agreement itself. And finally we became allies again to push for ratification. 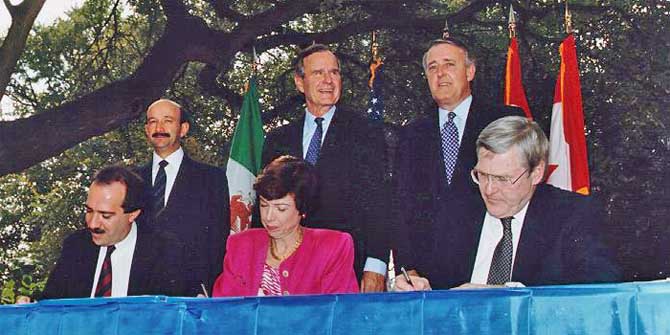 In December 1992, I signed the Agreement with George Bush Sr. and Canada’s Brian Mulroney (above, back row, left to right), but the US president-elect, Bill Clinton, had a history of opposition to the deal. Ultimately, the fact that we had unilaterally opted for modernisation and invited the US to the table – both moves designed to foster a better relationship – helped to convince Clinton to negotiate side agreements on labour and environmental issues instead of reopening NAFTA itself.

NAFTA has now been in force for 23 years, but Donald Trump’s inauguration brings challenges of a different magnitude. Yet these challenges come at a time when most Mexicans increasingly appreciate the benefits it has brought to our country’s economy, which are mirrored in the US and Canada.

Under NAFTA, Mexico went from being a mono-exporter of oil to exporting over a billion dollars’ worth of goods every single day. From tomatoes, avocados, and chili peppers (all native to Mexico), to cars, televisions, computers, and mobile phones. But every dollar of Mexican exports contains 40 cents’ worth of American imports, which translates into higher employment for them as well. Over seven million jobs in the US and three million in Mexico depend on this intense trade relationship.

Some say this was made possible by suppressing wages in Mexico, but the truth is that Mexican jobs linked to NAFTA boast salaries 40% higher than elsewhere in the economy, as well as unionisation of 90%. NAFTA also served as an investment agreement, with flows into Mexico increasing fivefold. Some said that NAFTA would divide Mexico from Latin America, but in reality NAFTA also stimulated our intra-regional trade. Mexican exports to Latin America represented just 10% of the total before NAFTA, and now they account for over 25%. 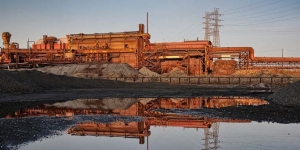 Even though the numbers are just as impressive for the American economy, the recent election campaign demonstrated that NAFTA has not been fully embraced in the United States. Two images are constantly repeated: the endless flow of migrants across their southern border and desolate cities impoverished by factory closures, especially in the Rust Belt.

As they say of tabloid journalism, “you provide the pictures, they’ll provide the war”. Today the war is a trade war, and NAFTA is the battleground.

In allowing stereotypes about NAFTA to prosper, many sectors of our societies have contributed to the problem. As President Kennedy knew well, “The great enemy of truth is very often not the lie … but the myth – persistent, persuasive and unrealistic.” Consolidation of these stereotypes was enabled by dereliction of duty amongst politicians, leaders, and the media, all of whom have failed to explain the real causes of factory closures in the US and the northward flow of Mexican migrants.

Manufacturing’s share of GDP in the Rust Belt began to slip in the 1960s, but the same was true of US industry in general, including coal. The US became a net importer of fruit and vegetables in the 1970s. In the 1980s the opening up of China prompted many American industries to relocate. This was complicated by changes in the capitalist system, not least the rise of services and the accompanying technological process of “creative destruction.” All of this came before NAFTA.

No one has stated loud and clear that, despite the deindustrialisation occurring in the major economies, amongst the ten US states to have gained most jobs from NAFTA are precisely those within the Rust Belt: Ohio, Michigan, and Pennsylvania.

Leaders have also failed to explain the mass migration of Mexicans to the US, which, according to the IMF, started in 1997 after the devastating peso crisis of 1995. Nobel Laureate in Economics Joseph Stiglitz has since confirmed that it was only NAFTA that allowed Mexico to overcome the crisis and contain migration flows. Today these flows are negative: more Mexicans return than leave. 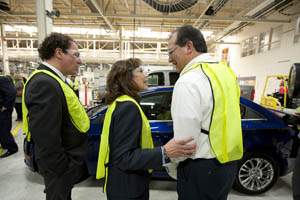 NAFTA must be modernised to incorporate changes in the productive system since its signing, but only without reopening it. Voters in the Rust Belt and elsewhere are understandably angry about the loss of jobs in manufacturing. But if we really want to improve the competitiveness of North America, it must be done vis-à-vis Asia, and as the economist Jaime Serra Puche has shown, the Mexican economy is key.

To “kill NAFTA”, as some propose, would destroy millions of jobs in the US, and do even more damage in Mexico. When NAFTA was negotiated, Mexico had 90 million inhabitants; today there are over 120 million. Dismantling NAFTA would mean higher unemployment and cause more migration that any wall could stop. Corporate-bond default by Mexican companies would also hurt US banks through their local affiliates.

Every country wants to safeguard its sovereignty. But in international negotiations, to exercise sovereignty is to find a compromise and apply it internally. Both partners lose when they fail to reach a consensus on which rules to apply.

On immigration, Mexico has not opposed enforcement of the law in our respective territories, as long as the dignity and human rights of immigrants are respected. But we repudiate violence, persecution, and covert racism. Mexican-Americans have a strong work ethic and a legitimate ambition to improve their lot, and their emigration represents a loss of human capital for Mexico. Let us instead collaborate to create opportunities for our peoples, finding positive solutions for both nations, like shared infrastructure projects with contractual obligations to use inputs sourced from the US. Let’s do it the smart way: we don’t need new walls, we need new doors in the old ones.

Finally, eliminating NAFTA would be a backward step for both countries, generating new tensions, anxieties, and costs, not least because of the inflationary processes unleashed. The energy and resources absorbed by these avoidable problems would be better spent boosting employment in both nations.

Worst of all, dismantling NAFTA would undo an historic change which has allowed Mexico to relate to the US in a different way. With clear rules, not whim and discretion. And with institutions to reduce our dependence on populists of left and right, who have joined forces in their extreme opposition to free competition in open economies.

NAFTA took us beyond the old game of international markets picking up the trail blazed by finance, with trade following on, and governments lagging behind, wielding tariffs in futile anticipation of the next steps for capital and commerce. The Agreement replaced these blunt tools with a new relationship in which reasoned, sustainable domestic policy has provided the stability essential to long-term productive investment for inclusive development. 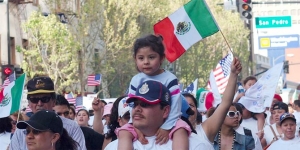 Mexicans in Mexico and Mexican-Americans can scarcely conceive of a new and historic split between these two great nations, as it would fly in the face of reality on the ground. Once doomed to be quarrelling neighbours, through NAFTA we have found a shared future as a stable and prosperous commercial region.

Dr Carlos Salinas de Gortari is a Mexican economist and politician. He served as President of Mexico between 1988 and 1994, during which time he was responsible for negotiating and ratifying the North American Free Trade Agreement. He gained his PhD from Harvard’s Kennedy School of Government in 1978. 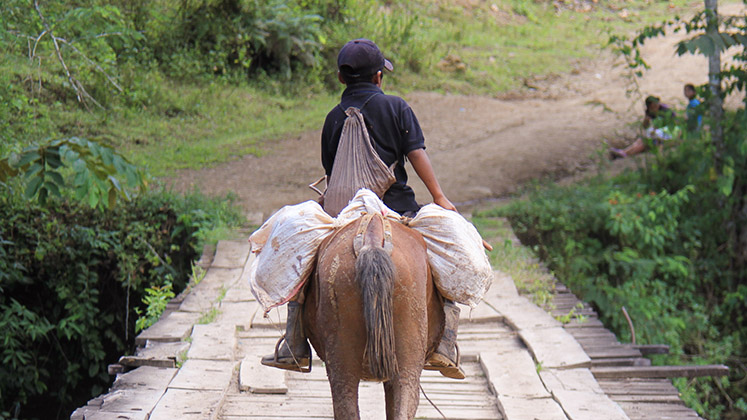