The G-7 has pledged millions to fight this year’s unusually numerous fires in the Brazilian Amazon. But in Brazil the real challenge is stopping fires from being set in the first place, and the Bolsonaro government has made it clear that economic development trumps environmental protection, not least by cutting ever deeper into the budgets of environmental agencies with a proven record of reducing forest fires. International actors can still make a difference, but for the moment it is European consumers that are sending the most effective message, writes Kathryn Hochstetler (LSE International Development).

The Brazilian Amazon is in flames again. At the meeting of the G-7 in late August, France’s President Emmanuel Macron led the way in pledging millions of euros to help put out the fires. Canada, the United Kingdom, and others have followed suit. But what can this unusually generous impulse achieve? Can the floods of international money put out the fires in the Brazilian Amazon?

Understanding fires in the Amazon

Answering this question requires a better understanding of the nature of the problem.

First, the Brazilian Amazon is indeed burning in 2019. According to data from the US and Brazilian space agencies, there are more fires this year than there have been since 2010 or 2012, depending on how they are counted.

There are still several months to go in the dry season so the current trajectory is worrisome. Judging by the nature of the fires, it also seems clear that they are linked to this year’s spike in deforestation, and at least some of them represent new clearance of old rainforests.

At the same time, these fires are not like the headline-grabbing wildfires of, say, western North America, which can burn out of control for days or weeks, requiring emergency fire suppression on a large scale.

The Amazonian fires are actually many, many small fires, deliberately set to clear brush and forests, and often – but not always – remaining under control. Sending large firefighting equipment is not on the right scale for the current fires and does almost nothing to address the real problem.

The political economy of fires in the Amazon

For example, on 10 August, the number of fires jumped 300 per cent when landowners in Pará participated in a coordinated “day of fire” that was pre-announced in local newspapers. Local employees of the environmental enforcement agency IBAMA tried to get help from the national government to pre-empt the fires, but they were ignored or told that there were no resources.

This message matched the ones that have been coming from President Jair Bolsonaro’s government since he took office on 1 January. Bolsonaro is interested in promoting economic development in the Amazon, not stopping destruction of the forest.

The resource issues are deeper than just the Bolsonaro government, however. Since Brazil slid into economic and political crisis in 2014, budgets for the national environmental agencies and scientific research have been cut steadily. Bolsonaro’s cuts are just the latest ones.

As those budgets were cut, the significant environmental achievements of the 2000s began to erode away. Between 2005 and 2009, annual deforestation rates in the Amazon dropped almost 80 per cent, but this significant achievement was undermined as the policies and institutions responsible for it were gradually deprived of support and funding.

What role for the rest of the world in fighting fires in the Brazilian Amazon?

For a time, the millions of dollars that Norway and Germany contributed to the Amazon Fund made up some of the difference, but these contributions have recently been withdrawn because of rising deforestation. These international partners also objected to the Bolsonaro government’s unilateral efforts to reshape governance of the Fund and lock out non-governmental organizations (NGOs). This represents part of a broader Bolsonaro strategy to de-resource and de-legitimise NGOs that have been crucial in shaping Brazil’s approach to environmental issues since the 1950s.

There are, however, many important potential uses for international funding, which could support local actors and institutions that have already shown they know how to work successfully in their own Amazon. Nonetheless, the Bolsonaro administration is equivocal about accepting international funds for these purposes, asserting that it will be the government that decides how any monies are spent. Minister of Environment Ricardo Salles has already proposed using the Amazon Fund to provide handouts to local landowners, so it is not clear that the government’s plans would control the fires and deforestation either, even if international funds do come into Brazil.

The most effective international influence is coming from European consumers, who have insisted on an array of certification schemes to ensure that they do not consume Brazilian soy or beef that was raised on Amazonian land deforested since 2006.

Like other certification and labelling schemes, the direct effectiveness of these is mixed, especially for beef. But they have made a segment of Brazilian agribusiness keenly aware that maintaining Brazil’s international environmental reputation is key to keeping their international markets. Aside from warning fire-setters directly that international markets for new production could easily dry up, this group can have an influence on Bolsonaro’s policies in a way that Emmanuel Macron and environmental activists cannot.

Their pressure kept Brazil in the Paris Agreement on Climate Change even though Bolsonaro had pledged to follow Trump out of it. They helped argue that the Ministry of Environment should not be folded into the Ministry of Agriculture. If the new EU-Mercosur trade agreement looks like it might not be ratified due to Brazil’s environmental failures, they will make their arguments even more strongly. These long-term interests will persist long after the end of the 2019 fire season in a few months. 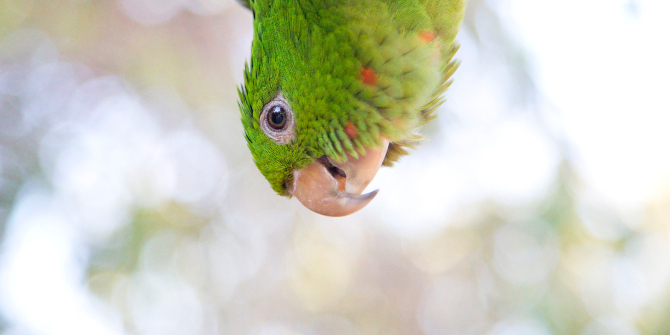